If we want to understand the immigration crisis, we need to revisit Reagan and the violence we brought the region 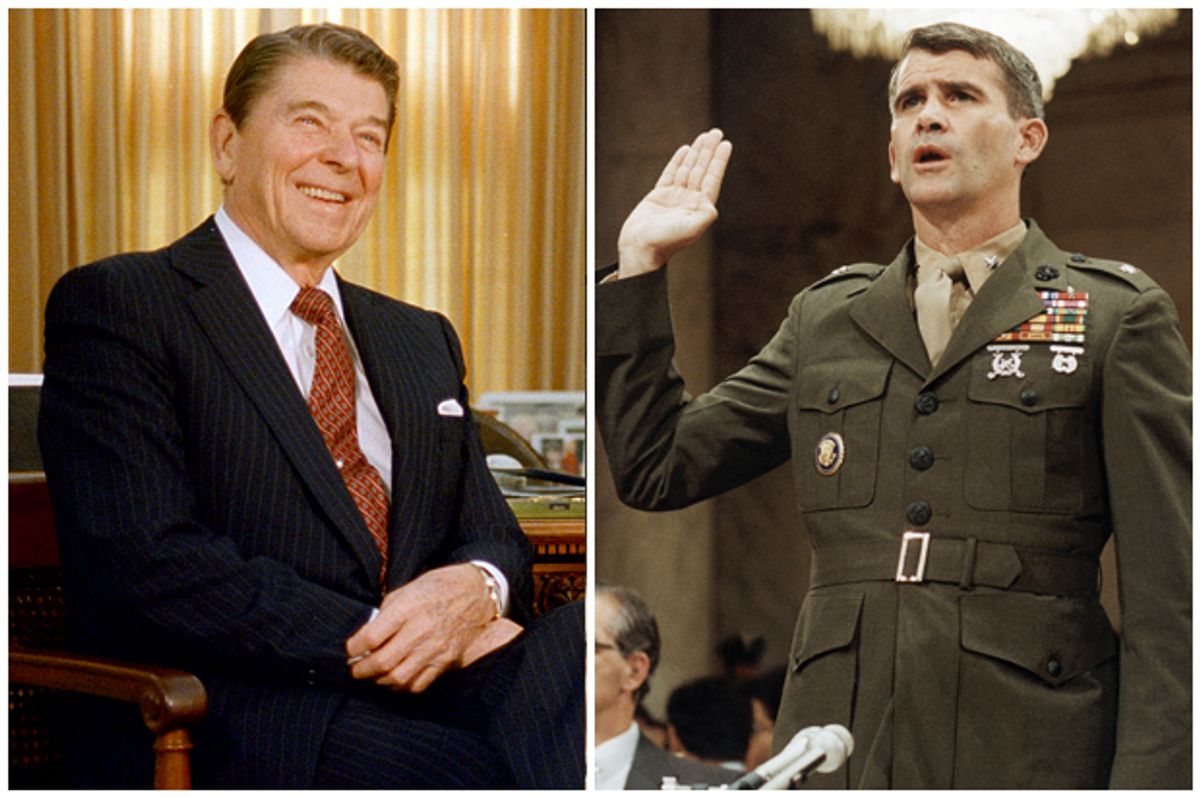 There seems to be a general consensus that we should be addressing not only the symptoms, but also the “root causes” of rising emigration from Central America. But what are they? On the right, the influx of children from the region is said to be the predictable result of our allegedly lenient immigration policy; mass deportation, therefore, is supposedly the obvious solution. “[I]mmediately deport these families, these children,” demands Rep. Raúl Labrador, R-Idaho, in “plane loads,” specifies Sen. John McCain, R-Ariz. Closer to the center, the causes of immigration from the region are typically said to be rising gang violence, the drug trade and the drug war and – to a lesser extent – poverty.

With the exception of our immigration policy, it’s obvious these factors are playing a major role in encouraging emigration from Honduras, Guatemala and El Salvador. But if we are to speak of true “root causes,” we have to look deeper still: first, to the gross inequality from which these social maladies arise, and second, to the political forces that have maintained and enforced this economic status quo, decade after decade. The implications of Thomas Piketty’s "Capital" for the developed world have been much discussed, but the meaning of inequality for poor countries is no less: The crisis of Central American immigration, I would argue, is a crisis of inequality, tragically manifested.

Clearly, inequality in Central America has been, to some degree, the brutal legacy of colonialism. Yet even today, the countries of Central America are among the most unequal not only in the hemisphere, but also on the globe: Honduras is the eighth most unequal country worldwide, and Guatemala isn’t far behind. Income distribution aside, Central American nations are also the most impoverished in Latin America. Using a multidimensional index, the U.N. estimates that 79.9% of children in Guatemala, 78.9% in El Salvador and 63.1% in Honduras live in poverty (compared to 31.8% in Venezuela and 15.7% in Chile). In Honduras, rates of malnutrition reach 48.5% in rural areas, while almost half of Guatemalan children are moderately or severely stunted in growth. Superimposed on this poverty has been a devastating wave of gang violence. El Salvador, Guatemala and Honduras have some of the highest homicide rates in the world.

But why is the region so underdeveloped, why is poverty so entrenched, and why has the colonial legacy of inequality proven so resistant to social and political change? Though the situation is admittedly complex, the dismal state of affairs in Central America is in no small part the result of the failure of social democratic and left-of-center governments to maintain power and enact socioeconomic change; this failure, in turn, is sadly (in part) the consequence of the ironic “success” of U.S. foreign policy.

Consider the case of Guatemala. As it did elsewhere, the legacy of the colonial and postcolonial era meant massive inequalities in land ownership in Guatemala, with large numbers of dispossessed peasants condemned to lives of severe poverty. This status quo was maintained in the 1930s and ’40s by the U.S.-supported dictator Jorge Ubico, but it was challenged following his overthrow in 1944, particularly after the election of Jacobo Árbenz in 1951. “All the riches of Guatemala,” Árbenz announced at his inauguration, “are not as important as the life, the freedom, the dignity, the health and the happiness of the most humble of its people.” And he delivered: In seeking to take Guatemala out of feudalism, Árbenz redistributed lands of the United Fruit Company (with full compensation) to landless peasants.

Perhaps unsurprisingly – in the context of the reductionist zero-sum politics of the Cold War – Árbenz was soon deemed a communist threat; however strong his democratic credentials and however nonexistent Soviet involvement might be, his days were numbered.

In Operation PBSUCCESS, the CIA achieved the overthrow of Árbenz by destabilizing the Guatemalan economy, engaging in various innovative forms of psychological warfare and ultimately orchestrating an invasion of the country from Honduras in 1954. Following his overthrow, a military dictatorship was installed, and variably supported, for decades. But this status quo could only be maintained with violence and authoritarianism; insurgency would follow, while inequality and social deprivation would remain largely untouched. The logic of support for “anticommunist” dictatorship in Guatemala reached a bloody apex during the Reagan administration, when the U.S.-supported military regime went on an unprecedented killing spree. During the reign of General Rios Montt (called by Reagan “a man of great personal integrity,” though recently tried in Guatemala on charges of genocide), the military embarked on a “scorched earth” counterinsurgency operation. Some 100,000 Mayan peasants were murdered by the army between 1981 and 1983 alone, through unspeakable acts of brutality, torture and sexual violence. An international Truth Commission would later appropriately call this genocide.

The dynamics in El Salvador during this period were to some extent similar: a feudal distribution of land, grinding poverty, the inevitable guerilla resistance, an unspeakably brutal military regime, consistent U.S. support under the mantra of anti-communism, and a blind eye turned toward death squads. The infamous murder of hundreds of men, women and children by the American-trained Atlacatl Battalion in the village of El Mozote was but one massacre in a larger massacre. The tragedy was that none of this was inevitable. “The Reagan administration,” as the historian Walter LaFeber put it in his classic history of Central America decades ago, “had the alternative of negotiated settlements, international supervisions, and multilaterally shared responsibilities. It chose the unilateral escalation of the CIA-military effort to win supposed final victories.” Yet what did we win? If anything, we only “made much of Central America even more dependent on the United States,” as LaFeber presciently put it.

Honduras, meanwhile, served dutifully during these years as the archetypal “Banana Republic,” a regional U.S. battle station labeled by one expert “the USS Honduras” for its supporting role in such covert and overt military adventures. Yet lest the above events seem like ancient history, the case of Honduras suggests that much has stayed the same. In 2009, the left-wing-elected government of President “Mel” Zelaya was overthrown in a military coup – accompanied by the usual repression and human rights abuses – that was again countenanced by the United States. “Obama,” wrote Tim Padgett at Time magazine, “seems to have ceded Latin America strategy to right-wing Cold Warriors,” namely in Honduras.

One’s opinion of Zelaya, or his administration, is largely beside the point; the 2009 coup has been a disaster for Honduras. According to a report from the Washington-based Center for Economic and Policy Research, since the coup the economy has plunged, poverty has increased, social spending on health care and education has been slashed, economic inequality has worsened, and 100% of all real income gains have accrued to the wealthiest 10 percent of Hondurans. When I was in Honduras as a medical student in 2008, poverty was severe and crime was much discussed, but it is clear that things have worsened enormously: Honduras is now the murder capital of the world. Ironically, when Sen. Ted Cruz, R-Tex., recently called the influx of Central American immigrants “a crisis of the President’s own making,” he was perhaps unintentionally half correct.

But as the case of Honduras demonstrates, it’s not only about counterinsurgencies and coups – it’s about the economic policies that follow. The orthodox “neoliberal” economic policies of the so-called “Washington Consensus” – centered around privatization, trade and financial liberalization, and diminished social spending – exacerbated inequality throughout Latin America for decades. Things, however, actually began to improve in many parts of Latin America a decade or so ago: “The region moved left politically circa 2000,” Paul Krugman noted a few years back, “partially turning its back on the Washington Consensus — and there has been a dramatic reversal in inequality trends.” However, though inequality began to fall in much of South America – predominantly in nations with social-democratic or left governments – progress in Central America was “minimal” for much of the decade, according to a 2012 paper by the economist Giovanni Andrea Cornia.  In Honduras and Guatemala, according to Cornia’s figures, the bottom 50% actually experienced a decrease in its income share during this period. Though the political situation varied from country to country – for instance, the left has won elections in both Nicaragua (which has much less of a problem with crime and emigration) and, more recently, El Salvador – the 2000s were overall a lost decade for much of Central America.

Admittedly, of course, it would be reductionist to explain the entire upsurge in Central American violence – or of child migration – on our foreign policy and neoliberal economic orthodoxy and its sociopolitical consequences. As others have emphasized, the impact of the drug war is no doubt critical, and gang violence can clearly take on a deranged logic of its own. But to divorce Central America – and this current crisis – from economics and history would be absurd.  Countries like Honduras, El Salvador and Guatemala have needed a New Deal since they escaped colonialism; instead, they were kept under the jackboot of murderous regimes, far too often with U.S. support, for much of the twentieth century. Retrograde neoliberal economic policies subsequently propagated the legacy of inequality into the twenty-first century.

The border children, for reasons of human decency, should be treated as refugees. But we should know that they are also – in no small way – escaping our own failed foreign policy and economic ideology: They are the refugees of inequality.