From "Scalped" to "Thief of Thieves": The most engrossing crime comics in history

If you love to see plans hatched and laws broken and heads cracked, check out the best of the crime comic genre 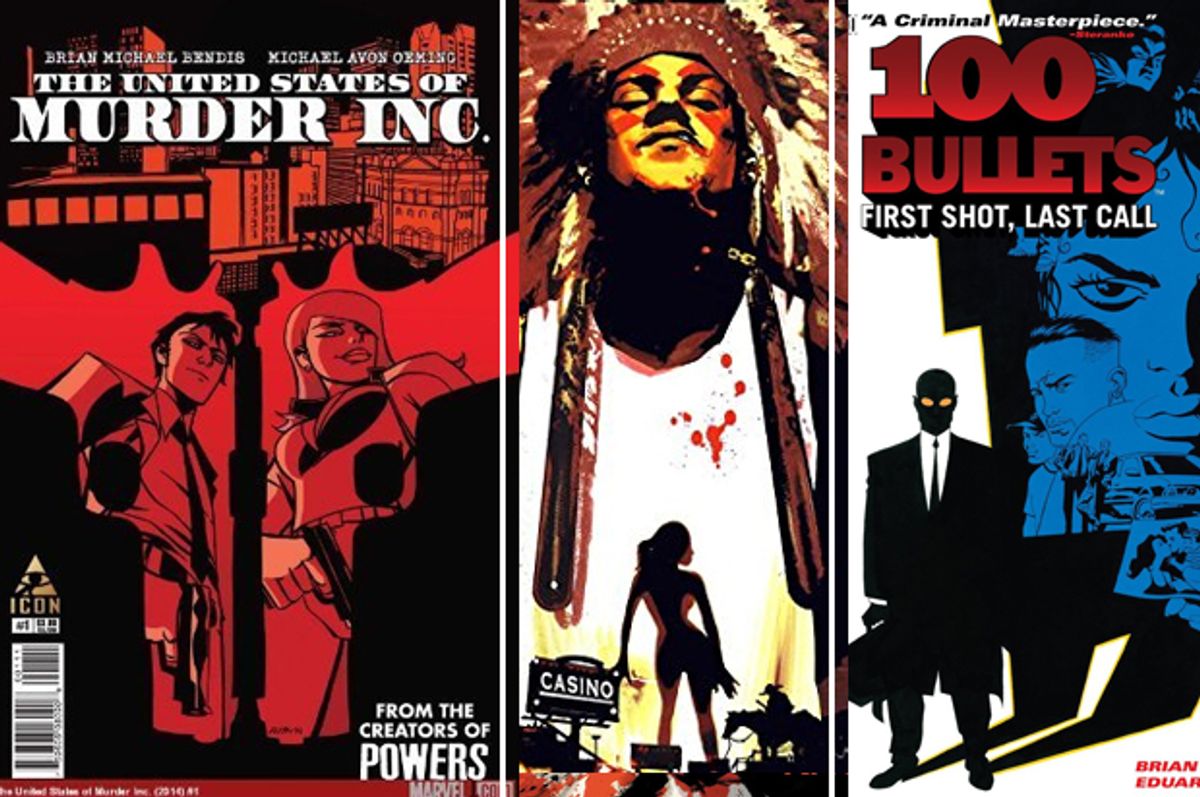 Crime comics are as old as comics themselves. Their long history has been overshadowed, like so many genres, by flashy superheroes. But a few recent events should put crime comics old and new back on everyone’s radar.

First, one of the best crime writers in comics history, Brian Michael Bendis, has released "Words for Pictures: The Art and Business of Writing Comics and Graphic Novels." Bendis wrote independent crime comics such as “Jinx” and “Torso” before eventually becoming Marvel’s most popular writer, thanks to immortal runs on “Ultimate Spider-Man” and “Daredevil,” not to mention his penning one of the best creator-owned comics ever, “Powers.” That series is also crime-heavy, since it’s about two cops whose beat is superhero deaths, and the spandex crowd in that series aren’t lucky enough to live in the safer environs of the Marvel or DC universe.

Secondly, “Sin City: A Dame to Kill For” is coming out in August. This is the second movie based on Frank Miller’s immortal “Sin City” comics, which out-noir even the hardest-boiled of crime stories, in comics or elsewhere. The first “Sin City” flick was perhaps the most faithful comic book adaptation ever, resulting in an utterly unique look and feel. I’m looking forward to this movie almost as much as Mickey Rourke’s disturbing character Marv looks forward to maiming corrupt cops.

In that spirit, here’s a look at some of the best crime comics around: mostly classics, plus a few recent gems. Some exist in a realistic universe; others are more fanciful. But if you love to see plans hatched and laws broken and heads cracked in movies and TV, you should break out of your genre comfort zone and check out these engrossing, larcenous tales.

Ed Brubaker has made a career out of bringing a noir feel to superhero, spy and supernatural stories, but his best series might be “Criminal,” in which Brubaker and longtime collaborator Sean Phillips spin tales of doomed criminals trying to do the right thing, or the wrong thing, or just the only thing they can manage given their precarious options. The first arc is still one of the best: It features Leo Patterson, a thief known for his ability to always get away with his crimes, even if it makes him look like a spineless weasel. Stay tuned for more Brubaker and Phillips, who are launching another crime series this August: “Fade Out” from Image.

Jason Aaron is one of the hottest writers in comics these days, in the midst of an all-time great run on “Thor,” which will soon include the much-ballyhooed female Thor. But the best work of his career might be “Scalped,” a crime story set on an Indian reservation that features a prodigal son of sorts, Dashiell Bad Horse, returning home to work for the corrupt tribal police force under Lincoln Red Crow. I never exaggerate or misuse words, but you will literally be blown away by the complex characters, dark humor and compelling double-agent plot. You should also read Aaron’s rural noir “Southern Bastards” from Image.  This heartfelt and cathartic story, illustrated by Jason Latour, fulfills the promise of its startling first image: religious billboards in the background, a mangy dog taking a dump in the foreground.

“The Superior Foes of Spider-Man”

Though this comic is part of the Marvel Universe, the superpowered aspect is downplayed (as is Spider-Man, who never appears). This extremely humorous comic features Fred Myers, the fifth-rate villain known as Boomerang, as he and the rest of the unstaffed Sinister Six try to steal stuff, make money, double-cross each other, and stay off the radar of the good guys and, more important, the bad guys who are higher up the food chain and therefore more competent and dangerous. For a bunch of costumed supervillains, the Superior Foes are remarkably down-to-earth and relatable. Think about real-life crooks who get arrested after posting evidence on Facebook or pulling some other dimwitted boner: the Superior Foes are of the same ilk.

The premise of this series — written by Brian Azzarello and illustrated by Eduardo Risso — is delicious. What if a mysterious stranger gave you an untraceable gun and freedom from prosecution, encouraging you to seek vengeance against the person who wronged you the most? In other words, would you kill someone if you knew you could get away with it? Over the course of 100 issues, Azzarello and Risso explored many answers to those questions, while unspooling a noir conspiracy thriller that is unquestionably one of the best creator-owned comics ever.

“The United States of Murder Inc.”

It’s a little premature to rank this as a best-ever series, but it’s promising as hell. Brian Michael Bendis and Michael Avon Oeming — the team behind “Powers” — have created a fresh take on crime that looks at what might have happened if the American mafia had continued to thrive rather than decline. The focus of the series is Valentine Gallo, a made man in the mafia-controlled states who is put in a perilous position just when he should have it, well, made. You don’t get any better at crime than Bendis and Oeming, and so far they’ve succeeded at differentiating this from “Powers” through the subject matter and the coloring, which is impressionistic, stark and evocative. Get in on this Icon series while it’s young.

Robert Kirkman has his hands full as author of “The Walking Dead,” the long-running superhero tale “Invincible,” and new exorcism series “Outcast.” In “Thief of Thieves” Kirkman proves he’s just as good at writing a story that’s grounded in reality as he is writing about zombies, demons, or superhero/aliens. In this series — which Kirkman writes collaboratively with co-writers Nick Spencer, James Asmus and Andy Diggle — Conrad Paulson is a brilliant thief who turns his talents to ripping off other thieves, all the while looking out for his less gifted son who’s also in the family business. Artist Shawn Martinbrough anchors the series with a classic noir style he honed while drawing Batman in “Detective Comics.”

You could argue that Garth Ennis’ all-time great run on “The Punisher” contains some of the best crime comics ever. Mass murdering psycho the Punisher, Frank Castle — Batman without the cowl and code against killing — is clearly a criminal himself, and his victims tend to be mob guys. For a Punisher vs. the mob story that’s hilarious, check out “Welcome Back, Frank,” which features the kind of dark humor Ennis (and artist Steve Dillon) perfected in “Preacher.” But for a recent look at crime and vigilantes by Ennis, pick up “Red Team” from Dynamite. Illustrated by Craig Cermak, “Red Team” features a special unit of cops who start killing the bad guys. This series reminds me a lot of the Strike Team from “The Shield” — but if all four members of the team were as smart as Vic Mackey.

Many Catwoman comics — much like the Halle Berry movie — are a disgrace to the character Anne Hathaway played so awesomely in “The Dark Knight Rises.” But when Ed Brubaker was writing “Catwoman,” it might have been DC’s best comic. With art from Darwyn Cooke (also a co-writer), Cameron Stewart and others, Brubaker focused on Gotham’s crime-ridden East End, where Batman is seldom found. The supporting cast is worth the price of admission, including Dr. Leslie Thompkins (Bruce Wayne’s mother figure who comforted him after his parents died), Holly (a former prostitute and junkie introduced by Frank Miller in “Year One”) and Slam Bradley. How can you resist a character named Slam Bradley? Slam, who steals the show in this series, is a private investigator and classic noir character who was introduced way back in Detective Comics #1: 26 issues before Batman himself.