"Getting Schooled": Back to teaching in the era of Common Core

A writer returns to a profession transformed by economic inequality, standardized testing and capitalism 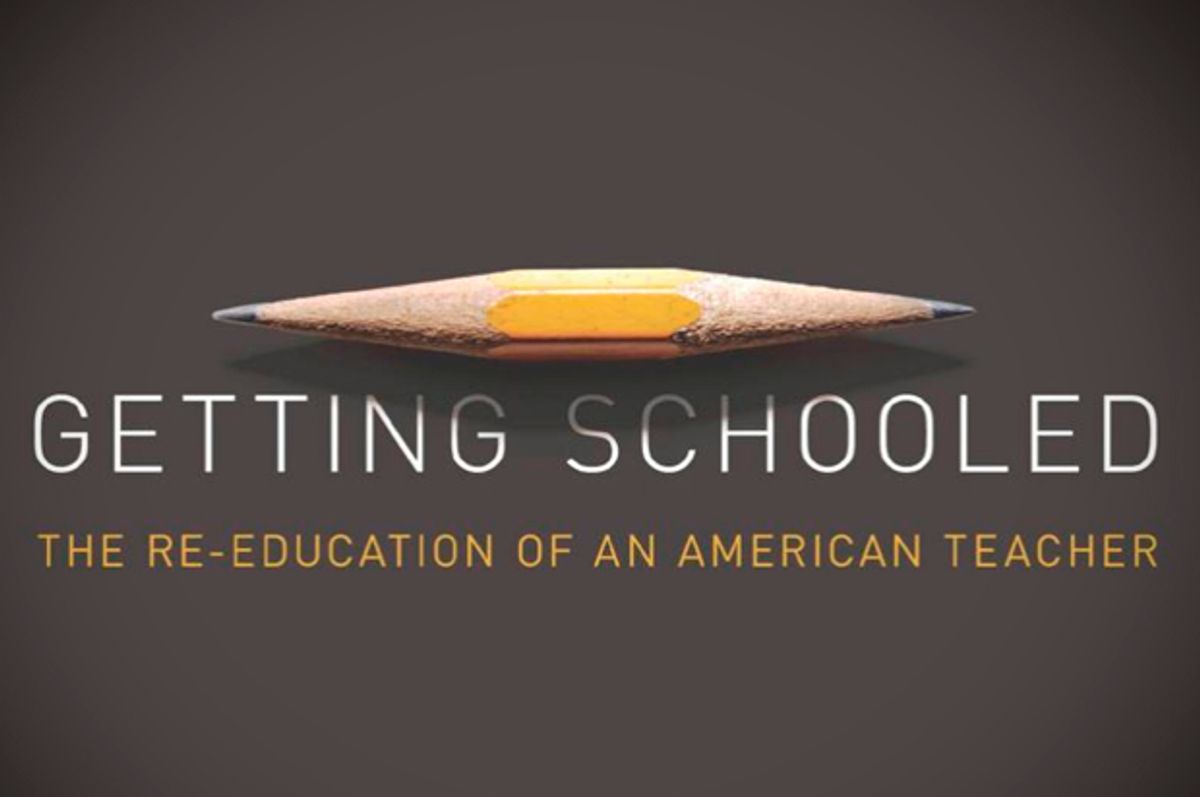 Before coming out with his new book, "Getting Schooled: The Reeducation of an American Teacher," Garret Keizer published popular treatises on privacy and on quiet; each was about how modern Americans enjoy less and less of those two blessed conditions. In that light, you could call "Getting Schooled" a book about books. One of its less happy refrains has to do with how little books rate in the lives of the public high school students Keizer taught when he returned to the profession after a 14-year hiatus.

A running motif in this chronicle of the one-year stint Keizer spent as an English teacher in rural Vermont is a collection of Library of America volumes (from the series of archival-quality collections of work by great American writers). Keizer spots a pyramidal stack of these books in a display in the school library, but they're just being used as risers for an assortment of "graphic novels and topical books of particular interest to teens." In fact, the Library of America volumes are "discards" because no student has checked out any of them in ages. Dismayed, Keizer resolves to reinstate the books in the library's collection before his year is up. "School libraries exist to serve all the students, yes," he writes, "but they also exist to serve that student who only comes along once every 25 years," that unicorn-rare creature who still has time and attention for Walt Whitman.

Keizer is nothing if not rooted. He returned to the same school where he taught for 16 years before he left to devote himself to writing full-time. He's both a local guy made good and a Vermont exemplar. He has been married to the same woman and lived in a nearby town for over three decades. He distrusts cellphones and what he calls "digital bling" ("'the digital age' is not my god any more than the 'global marketplace'"). He's disgusted by the encroachment of commercialism and bureaucracy into the once-sacred groves of private thought and feeling. He intends "to live or die on the value of books." He once contemplated pasting a bumper sticker reading "I'm a homeschoolin' gun-totin' Bible-bangin' .... SOCIALIST" onto his car. He's a contributing editor to Harper's, for crying out loud -- all of which is to say that Keizer fits the profile of a neo-curmudgeon thinker in the vein of Sven Birkerts or Wendell Berry, leftist champions of old-fashioned rural ways, print books, earnestness and deep thought.

Now, the knee-jerk, smarty-pants Internet-opiner's response to neo-curmudgeonly assertions is supposed to be a saucy, skeptical dismissal -- perhaps with lashings "golly!" and "gee!" or similarly arch exclamations. What a dinosaur! How can Keizer so completely not get it? But this is one curmudgeon who can't be easily written off. First, all that time he's spent alone with the printed page and his own thoughts has produced admirable results. "Getting Schooled" is one of those books in which you find yourself underlining something on nearly every page. Its author constitutes Exhibit A for the argument that if you give yourself time and space to ruminate, you're more likely to come up with some sterling and well-expressed insights. Imagine that.

Second, although one of Keizer's colleagues tells him, "I'm afraid that the day of the teacher as artist is dead," this book offers ample proof that her mourning is premature. Keizer can be tough and demanding, but the trickiest parts of his job, of all high-school teachers' jobs, involve the delicate handling of adolescent psyches, kids who are both exquisitely sensitive and chronically inattentive. "A teacher should never underestimate the factor of selective listening," he writes. "Simply to use the word 'stupid' risks having the kid believe, or claim to believe, that you've called him stupid. He hears the word and nothing else." And then there's this ninja technique for preventing students from cribbing their work from online sources like SparkNotes: An exam that reprints one of the chapter summaries from the SparkNotes website and asks students to describe the ways it gets the book wrong.

Keizer, who returned to the classroom so that his family could keep their health insurance while his speech-therapist wife took a break from her own school-system job, was assigned to teach average students. He was reminded again and again that many of them arrived in his classroom from homes with neglectful, absent or outright abusive adults. Some of them pined for the small family farms that had been lost to big agriculture. Despite the popular image of rural Vermont as the essence of wholesome, bedrock American values, poverty -- material, but also emotional and cultural -- has blighted many of their young lives. Meanwhile, at the state's celebrated town meetings, where every tax measure was battled down to the penny, "countrified transplants who've sent their children to the best private colleges money can buy evoke the Vermont tradition of making do with less."

"Getting Schooled" prickles with many sharp-toothed observations. If there's anything Keizer cannot endure it's the sentimental cant that cloaks the way so many people talk about children and their education. There are the dubious teaching philosophies designed by "active consultants" -- in other words, "those who've managed to figure out that there are easier and more lucrative ways to make money in the education racket than by teaching kids." These allegedly innovative methods are always tacitly underpinned by the "implication that people up a creek without a paddle can be taught a strategy for maneuvering their boats that eliminates any need of buying them paddles." When teachers, administrators and parents meet to discuss such matters, they claim that the kids come first, but "is it caring, or projecting the appearance of caring that matters most to us? Adults are no different from adolescents: what we most desire is the approval of our peers."

Some of Keizer's most striking points apply only tangentially to education. In the resistance of some of his proudly "redneck" students to reading, he sees a defeatism that's more learned than inherited. These kids, after all, often seem more "local" than their own parents: "So much of what passes for authentic 'redneck' culture -- the Confederate flags, the macho strut, the trailer-park mores -- like so much of what passes for authentic inner-city culture, is in fact a fabrication of the market," in this form, a "countrified getup" used to sell "beer, mass entertainment and motorized recreation." The sad thing, Keizer notes, "is that at some deep level the self-identified redneck wants to rebel against the economic forces that have run roughshod over small-scale agriculture and agriculturally based community, even as he buys his prepackaged rebellion from those very forces."

It's the idea that an individual's problems may be rooted in something larger than himself that Keizer finds the most difficult to impart to his kids. The brutal reality of American public education -- that it is charged with "creating a democratic society within a decidedly undemocratic economic system" -- gets swathed in vapid pep talks, bootstrapping rhetoric and the blind worship of high-tech tycoons as everyone's ultimate role models. "We teachers will make the world a better place, our masters tell us," Keizer writes, "and we will do so by finding more effective ways to keep our students in lockstep with the world as it is."

Keizer finds plenty to encourage, as well, from the almost preternaturally supportive principal (one of his own former students), to the kids who suddenly catch fire with learning or who just adopt the habit of stopping by his classroom to say hello. He admires and respects his colleagues, especially their willingness to shoulder the ridiculous and often insulting burdens of standardized tests and procedures. His own wife's ability to tolerate the Kafkaesque demands of a system that insists she document every 15-minute increment of her workday, but that doesn't permit her to allocate any of that time to creating the documentation itself, leaves him awestruck. He even turns out to be less of a fogey than you'd expect. When one of the school's few black students thanks him from introducing the class to Miles Davis, Keizer asks the kid to give him a tutorial on Dr. Dre

You can see why Keizer loves this impossible, wonderful, thankless and immensely gratifying work. You can also see why, at the end of his year in the classroom, he decides that he's done. Even if the institutions of public education weren't maddening, teenagers really can drive you nuts. They can also, however, make your day. One of the standardized tests Keizer's students were required to take calls for a "constructed response" -- that is, a coherent piece of original writing. He had them practice by writing about things they'd learned in the class "that were not taught, not intended or not noticed by the teacher." One kid responded, "I have learned that reading really isn't that bad." That may not be a Pulitzer Prize, but it still sounds like a job well done. And besides, Keizer got those Library of America volumes back on the library shelves.