Pick your doomsday: 9 end-of-the-world theories that will haunt your dreams

Climate change and nuclear war are obvious choices. But don't rule out a robot uprising — or something even weirder 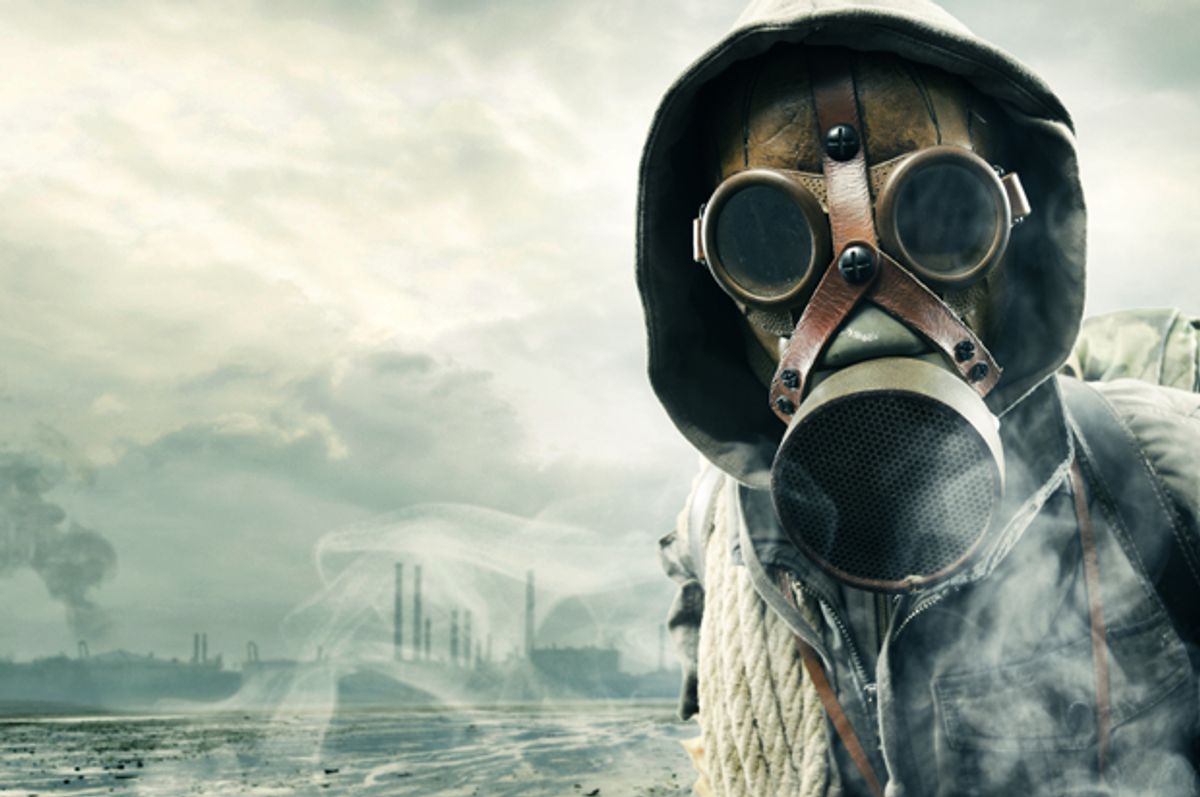 Stephen Hawking once noted that Earth is a "fragile planet," and if humanity does not find an alternative place to live -- somewhere in space -- we could be doomed. It is less of a rapture prediction than a reminder that resources are finite, there are greater forces than ourselves in the universe, and that we as a civilization trend on the self-destructive side of things.

Just this week specific studies about climate change, solar flares and the dinosaurs have been published. The common thread? Past, nearly missed, or future earthly destruction. Each one holds a lesson about Earth's fragility.

The following list is not intended as a scare-tactic lecture, but rather a look at how both we and the universe could shape humanity -- and its potential end.

A new study published by Nature Climate Change has concluded that due to pollution, a shift to resource-intensive Western diets, and anthropogenic climate change, the Earth will need 50 percent more food by 2050 to feed the population. The problem? Our supply may not be able to meet the demand. As CBS explains, "as our need for food rises, our ability to produce that food may be lowered by climate and air quality changes."

The researchers found that global warming could reduce food production by 10 percent. Crop yields won't just be affected by global warming but also by the ozone layer. MIT associate professor and the study's author, Colette Heald, told CBS that crop production is "very sensitive to ozone pollution." Using a model that examined four major crops and air-quality projections, the researchers found that malnutrition in developing countries could rise to 27 percent, up from the current 18 percent.

Climate change could, of course, have other dire effects on our food production, including flooding and other extreme weather, like the current drought in California. "Overall, climate change could make it more difficult to grow crops, raise animals and catch fish in the same ways and same places as we have done in the past," the EPA explains. "The effects of climate change also need to be considered along with other evolving factors that affect agricultural production, such as changes in farming practices and technology."

Climate change might not fully eradicate humanity, but crunch the numbers and the seriousness of the threat comes into view: Take a massive food shortage and combine that with unpredictable and violent weather patterns, mix in some geopolitical conflict (read: the possibility of all-out war) and you have an all-too-real recipe for global disaster of unprecedented proportions.

The most catastrophic pandemic on record was 1918's Spanish influenza. The virus, which at the time could only travel by ship or land, still killed 50 million people. Since then the global population has been hit with a series of contagions that have spread faster than ever before. The most recent was the H1N1 swine flu outbreak of 2009, and while it wasn't the pandemic to end all pandemics that some predicted, it was a wake-up call nonetheless.

Just this year, MERS has killed hundreds in Saudi Arabia, and Ebola has infected thousands across Sierra Leone, Liberia and Guinea, and killed more than 600, including top Ebola doctors.

How and why do diseases, particularly viruses, spread? The Guardian reported last year:

Viruses and other pathogens continually flow between species, often with no effects, sometimes mutating, once in a while causing illness. This mixing is known as 'viral chatter' and the more different species come into regular close contact, the higher the chances of a spillover event occurring.

'This is how viruses have always worked, the big change is us,' says Mark Woolhouse, a professor of infectious disease epidemiology at the University of Edinburgh. 'The big change happened probably several thousands of years ago when we became a crowd species and that gave these viruses new opportunities which they hadn't had before in humans. Ever since then, from time to time a new virus has come along to take advantage of this new, very densely populated, crowded species – humans – that it can now spread between much more easily. That process is still happening; the viruses are still discovering us. We like to think we discover viruses, but it's also the viruses discovering us."

The days of Cold War-era "mutually assured destruction" might be long gone, but nuclear weapons still pose a grave threat to civilization. In 2012 the International Physicians for the Prevention of Nuclear War and Physicians for Social Responsibility, who won a Nobel Peace Prize, released a study stating that famine caused by nuclear disaster could kill more than 1 billion people. The group subsequently updated this study a year later, because it underestimated the damage it would unleash on China.

"A billion people dead in the developing world is obviously a catastrophe unparalleled in human history," Ira Helfand, the report's author, told the Telegraph. "But then if you add to that the possibility of another 1.3 billion people in China being at risk, we are entering something that is clearly the end of civilization."

The above study focused mainly on nuclear war between Pakistan and India, where conflict, tension and nuclear weapons abound. However, Helfand tells the Telegraph that the result could be similar in any nuclear conflict. For example, nuclear war between the U.S. and Russia, he says, "we are talking about the possible -- not certain, but possible -- extinction of the human race."

It was recently revealed that in 2012, humanity may have had a close brush with doom, all due to solar flares. On July 23, 2012, the sun belched one of the most massive plasma clouds ever detected with a speed of 3,000 km per second, according to the Guardian. That is four times as fast as a typical solar flare. The flare could have caused a massive blackout of satellite communications, power grids and electronic devices. And if the solar storm had occurred a week earlier it would have.

"If it had hit, we would still be picking up the pieces," University of Colorado's Daniel Baker told the Guardian. Baker is part of the Laboratory for Atmospheric and Space Physics. "I have come away from our recent studies more convinced than ever that Earth and its inhabitants were incredibly fortunate that the 2012 eruption happened when it did," he continued. "If the eruption had occurred only one week earlier, Earth would have been in the line of fire."

According to the American Museum of Natural History, there are around 1 million "near-Earth" asteroids that could do serious damage to the planet if they hit. (Just ask the dinosaurs.) Neil deGrasse Tyson explains the threat and deflection of such a space rock below:

You can read about the threat of space debris in depth at NASA's Asteroid Watch.

6) The robots take over

At first glance the words "robot apocalypse" seem far more rooted in sci-fi than reality. However, as technology lurches forward, and artificial intelligence becomes more sophisticated -- to the point of actually becoming self-aware and surpassing humans in terms of raw intelligence -- who knows what could happen.

The robot apocalypse might not look like a scene from "Terminator," according to experts interviewed for a recent Business Insider. But they did caution that artificial intelligence was possible, and that we ought to have a plan in place for when it does. As Northwestern University professor John O. McGinnis stated:

Even a non-anthropomorphic human intelligence still could pose threats to mankind, but they are probably manageable threats.  The greatest problem is that such artificial intelligence may be indifferent to human welfare. Thus, for instance, unless otherwise programmed, it could solve problems in ways that could lead to harm against humans. But indifference, rather than innate malevolence, is much more easily cured. Artificial intelligence can be programmed to weigh human values in its decision making. The key will be to assure such programming.

Now we're really getting into wacky territory. Imagine a chunk of space that is totally empty, hence a vacuum. There are absolutely no particles, no matter, nothing at all occupying this particular piece of extraterrestrial real estate. You might reasonably assume that it is therefore at what physicists call a "ground state" (because there is no energy to disturb it) and that this space is totally stable as a result.

Well, according to one interpretation of quantum theory, this vacuum isn't at a ground state at all. It just seems like it is. Therefore, it is a "false vacuum." And the fear is that someday we might find that out the hard way -- with grave repercussions for our universe.

Or, to put it another way, imagine you're living inside a bubble (like, a really big bubble) that seems like it's basically in a stable, ground state -- except the air pressure on the outside of the bubble (which you can't see or detect; the bubble is all that you know) is actually much lower than the air pressure within. If the bubble were to pop, you'd quickly find that the new physical conditions you now experience are dramatically different from the ones you had enjoyed within the bubble. Apply that same idea to our universe, and imagine how much it would change if something as fundamental as energy now acted completely different. Life, the universe and everything might just suddenly cease to be.

(It bears mentioning, as Ask a Mathematician does, that "the idea of a false vacuum is wild speculation and that there is no indication, not even a little, that the vacuum of the universe is a false vacuum and not the true ground state.")

This theory is so supremely loopy -- it involves tiny, malevolent robots that assimilate everything in their path -- that we might as well just refer you to the loopy video embedded below:

9) The laws of physics play out exactly as planned

The fact of the matter is this: Someday our sun will burn out and take the Earth with it, effectively ending life as we now know it. Even if we've managed to keep ourselves alive long enough to achieve interstellar travel, and find a new home in the safety of some other solar system, that hypothetical star will also eventually burn out -- as will every other star in our universe.

If prevailing theories are correct, then the cosmos has in store for them a long, protracted demise -- known as "the heat death of the universe" -- in which the natural, overwhelming tendency of energy and matter toward greater entropy (i.e., disorder) proceeds to the point where even the atoms that make up matter will eventually break down into basically nothing.

The good news is that this (super-depressing) outcome won't transpire for something like 10^100 years. (That's 10 with 100 zeroes behind it, in case you were wondering, and it's an impossibly long stretch of time.) Plus, if we look even further into the future -- what would feel like actual infinity if there were anyone around at that point to feel anything anymore -- it remains possible that an entirely new universe could still spontaneously pop into existence.