It has yet to be confirmed, but it appears to be from an Israeli airstrike, according to a U.N. official 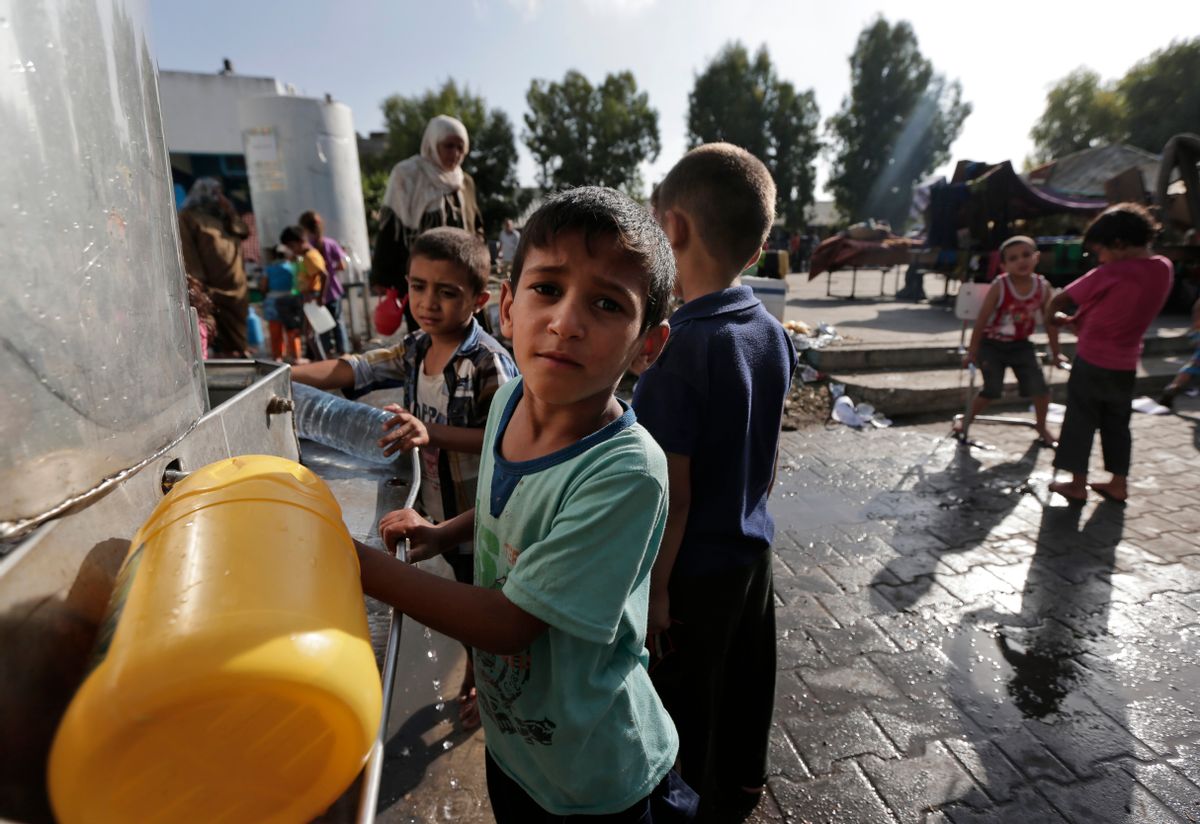 RAFAH, Gaza Strip (AP) — A United Nations school sheltering displaced people in the southern Gaza Strip was hit Sunday by what a U.N. official said appeared to be an Israeli airstrike, as the military struck the Hamas-ruled territory despite signaling a possible scaling back of its 27-day offensive.

Gaza health official Ashraf al-Kidra said at least 10 people were killed and 35 wounded after the strike near a boys' school in the town of Rafah. Robert Turner, the director of operations for the U.N. Palestinian refugee agency in Gaza, said preliminary findings indicated the blast was the result of an Israeli airstrike near the school, which had been providing shelter for some 3,000 people. He said at least one U.N. staffer appeared to be dead.

"We don't have confirmed details yet but the initial report says that there was some kind of airstrike in a street outside one of our shelters," Turner said.

Witnesses said the attack happened while people were waiting in line for food supplies. The Israeli military had no immediate comment.

In a chaotic scene inside the compound of the U.N. school, several bodies, among them children, were strewn across the ground in puddles of blood. Bloody footprints stained the ground where people had rushed the wounded into ambulances.

"Our trust and our fate is only in the hands of God!" one woman cried.

Some of the wounded, among them children with bloody head bandages, were transported to the Kuwaiti hospital in Rafah and others were treated in what seemed to be a makeshift clinic underneath a tent.

Several dead bodies, wrapped in white cloth, were lined up on the floor.

At least six U.N. facilities, including schools sheltering the displaced, have been struck by Israeli fire since the conflict began, drawing international condemnation. In each case Israel has said it was responding to militants launching rockets or other attacks from nearby.

In nearly four weeks of fighting, more than 1,700 Palestinians, mainly civilians, have been killed as well as nearly 70 Israelis, almost all soldiers.

Israel launched an aerial campaign in Gaza on July 8 to try to halt Palestinian rocket fire that has reached major cities, and later sent in troops to dismantle a sophisticated system of cross-border tunnels built by the militants in order to carry out attacks.

While fighting continued, several Israeli tanks and other vehicles were seen leaving Gaza. In a televised address late Saturday, Prime Minister Benjamin Netanyahu suggested troops would reassess operations after completing the demolition of Hamas military tunnels under the border. Security officials said the tunnel mission was winding down.

At the same time, Netanyahu warned the territory's Hamas rulers that they would pay an "intolerable price" if militants continued to fire rockets at Israel and that all options remain on the table.

The Israeli military death toll rose to 64 after Israel announced that Hadar Goldin, a 23-year-old infantry lieutenant feared captured in Gaza, was actually killed in battle. His funeral is later Sunday. Three civilians have been killed on the Israeli side since hostilities began.

Israeli Defense Minister Moshe Yaalon revealed on his Facebook page Sunday that he is a distant relative of Goldin.

Israel had earlier said it feared Goldin had been captured by Hamas militants alongside two other soldiers who were killed Friday near Rafah in an ambush that shattered a cease-fire and was followed by heavy shelling that left dozens of Palestinians dead.

Hamas has said it will not stop fighting until Israel and Egypt lift their blockade of Gaza, imposed after the Islamic militant group overran the territory in 2007.

Large swaths of Gaza have been destroyed and some 250,000 people have been forced to flee their homes since the war began on July 8.