We must consider Gaza images: It's OK to wonder about the lives of the dead -- it makes us human, and it makes us understand 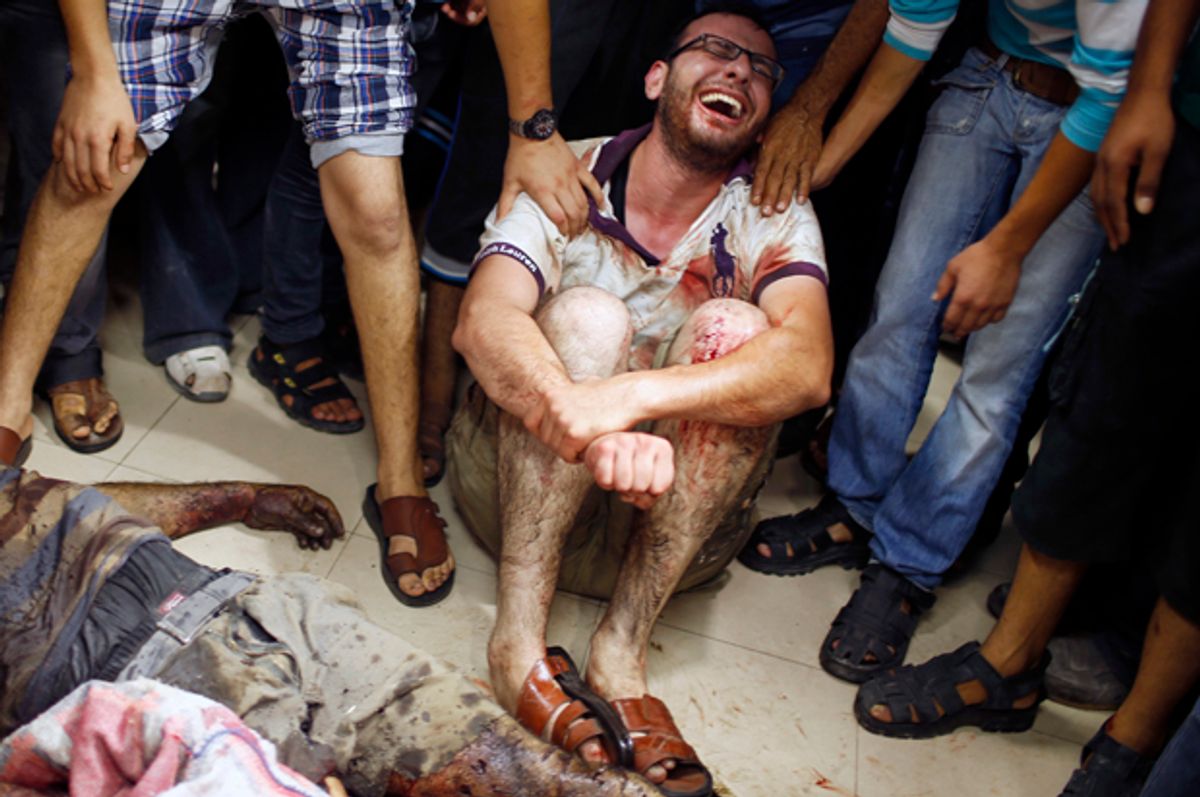 A Palestinian mourns next to the body of a man, who medics said was killed by Israeli shelling near a market in Shejaia, at a hospital in Gaza City, July 30, 2014. (Reuters/Mohammed Salem)
--

Images of dead bodies (especially those that came to violent ends) are typically relegated to the "dark" parts of the Internet.  I'm looking at you, 4chan.

So what do we make of the news this month? Four young Palestinian boys killed by Israeli shell fire while they played on a beach. Photos of their tiny, broken bodies splashed across the front pages of international newspapers. The victims of the downed Malaysian Airlines Flight 17, intimately and closely photographed as they lay strewn across a Ukrainian field. Photos posted immediately on Twitter, followed by major publications.

I'm not going to include the pictures here, because they are easy to find if you are looking. But let's assume you’ve seen these pictures. Maybe you reacted in the same way as the person who wrote to me and said the following: "I would never admit this publicly because A.) it’s embarrassing and B.) I don’t want to co-opt a tragedy totally unrelated to me, but I spent HOURS staring at MH17 crash photos. Jesus Christ, they were all so voyeuristic and disrespectful, and so nightmarishly graphic that I was drained and crabby for days afterward. But I still couldn’t look away..."

Go ahead, admit it publicly. It is natural for these images to be both horrifying and compelling. Even for those accustomed to clicking on “GRAPHIC PHOTOS” or “NSFW” links, the state of the bodies was a master class in psychological terror.  I can't make the images, and the wars that caused them, any less horrifying. But as a mortician interested in the history of Western death culture, I hope I can put your reactions to the pictures in context.

The history of death culture is complex, but simply put, for the vast majority of humanity's history, dying went something like this:

2) Humans died quickly. Infectious diseases (influenza, smallpox, typhoid, you name it) and violence were the swift, effective killers of men.

By the middle of the 20th century, everything about dying had changed. These days, dying in the first world goes like this:

1) Humans hardly ever see a death, nor do they see dead bodies.  We have an efficient, bureaucratic system that takes them away.

But in a few key ways, this is also a uniquely modern situation.One particularly disturbing photo from the MH17 plane crash was of a young boy, still strapped to his plane seat.  The deaths themselves were the special kind of violence that comes with modernity,  where men (and yes, they are usually men) can dispassionately click a button and cause death at a great distance, never having to stare face to face with the person -- with the children -- they have killed.

On every level, these photos are the old colliding with the new: What death was 50 or  100 years ago versus what death has become and where it's going.  These are huge questions, and an opportunity to confront what it is we value and believe.

I looked at the photos. As I scrolled through them, the way the people died disturbed me, deeply. But the corpses did not. They looked like … dead humans. And that comfort (paradoxically, it is a kind of comfort) comes from the consistent exposure to dead bodies that a career as a death professional allows me. Working in death is a glimpse into the past, when everyone was an expert on the dead.

Saying they "looked like corpses" doesn't mean I'm saying the bodies are somehow unimportant.  Quite the opposite. I'm sure other death professionals (morticians, coroners, etc.) feel the same "put me in, coach” feelings I do when I hear that more than 80 bodies still haven’t been recovered at the MH17 crash site.  Let us take care of those bodies, get them out of the damn field so they can be brought home to their families, who can engage with them in a personally meaningful way.

Possession of the dead body is crucial to providing the tiniest beginnings of closure in this kind of unimaginably dreadful situation. No family should have to face their loved one’s death on a journalist’s Twitter account while they are thousands of miles away, helpless.

Each person in each of the pictures had rich lives and stories. But they ended up looking like corpses do: like the person who once lit up that shell of a body has left the building.

All I can say is that it's OK to wonder about those people: Wonder about the physical ("why is that one body more orange than the others?" as one commenter asked), wonder about the lives of the people who died, wonder what we can do to stop the cycles of violence that caused the deaths of the innocent.

It doesn't make you a voyeur. It makes you a human. Humans wonder about death.  We've been doing it for thousands of years.

I'm not suggesting you go look at the pictures, as opening that Pandora’s box is a very personal choice. What I'm saying is that we need people confronting death and confronting these big questions as we enter death's new frontier. If you did see the pictures, it's OK to feel gross, disturbed, angry.  I just ask you to use those feelings. The corpses themselves are not scary, how they became corpses is scary. Don't let the photos make you afraid of dying, let them make you afraid of how we're living.

Caitlin Doughty is a licensed mortician and writer living in Los Angeles.  She is the founder of The Order of the Good Death and the host of the “Ask a Mortician” webseries. W. W. Norton will publish Caitlin's memoir, "Smoke Gets in Your Eyes: And Other Lessons from the Crematory," on September 15. Follow on Twitter at @TheGoodDeath.