Why does "The Strain" distrust doctors so much?

If my eyes went bloodshot and my teeth became fangs, I'd probably head over to my local healthcare professional 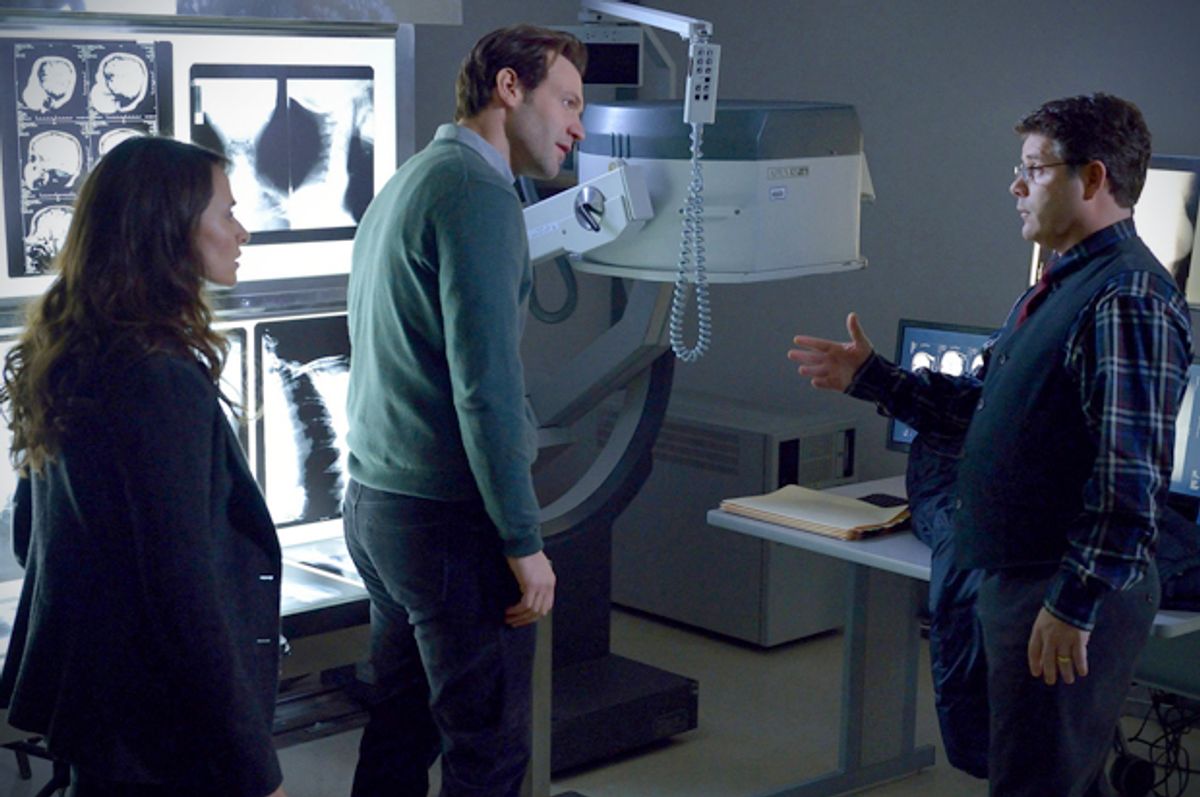 It seems like an easy solution to the premise FX’s “The Strain” has set for itself: The four survivors of the airline flight that brought on the vampirism plague should maybe just go to the doctor’s office to get their general malaise and grodiness checked out. And yet no one seems concerned enough to do that. It’s a classic example of a TV show casually glossing over the one plot twist that would resolve all of its problems.

In last week’s episode, poor Ansel was suffering not merely from conditions internal (voices in his head primary among them) but from problems anyone in the world would have noticed. His teeth had become jagged fangs and his eyes weren’t just bloodshot but red. But his wife, rather than directing her husband toward the authorities who’d been already studying the jetliner tragedy, just took her kids and left for a while, presuming perhaps that it’d all get sorted out. When she returned, last night, to find her husband having chained himself up to avoid further damage beyond the dogs he’d already killed out of blood lust, she fed her husband the nosy neighbor. It was a cute twist -- but come on, lady, even if you have no hope your husband will get better, aren’t you at least curious about whether his case can help others? At no point did you think that calling a hospital on a man who was normal before a flight on which he turned into a bloodsucker might be a good idea? Not when he came downstairs with bright-red eyes? Not when you saw the dogs he’d killed in the backyard? Maybe the doctor couldn't have prevented the imminent global plague, but wouldn't you like an answer to your husband's overnight transformation more satisfying than "Yikes!"?

From the jump, all four of the survivors were weirdly resistant to medical care, even despite the facts that a) they were the only ones who’d made it out alive of a shocking mass death unprecedented in history, and b) they were showing horrifying symptoms. Gabriel, the “rock musician,” saw his penis fall off in episode 3 and didn’t see a real problem. Perhaps he was too far gone on the road to full-on vampirism to even care about getting help. But what about the people around him who saw him bite a woman’s neck early in the season? We were told then that such a violent act was out of character even for this Marilyn Manson type; shouldn’t someone have put the pieces together?

But perhaps it’s all in keeping with what “The Strain” fans (and I am one) love about the show. Everything about it can be retroactively explained by a feat of exposition the writers didn’t bother to include in the narrative. Of course, the team of medical investigators, led by Corey Stoll’s Ephraim Goodweather, have revealed themselves to be incompetent at dealing with the growing plague. Though none of the infected’s loved ones ever refer to Goodweather’s tragicomic press conference from Episode 1, in which he revealed he was flying blind, they have absolutely no reason to trust he could do a good job.

But that all goes unsaid. “The Strain” casts its characters' refusal to seek medical attention in the face of obvious crises as an act of love or of rugged rocker independence. And the one poor sap who got stuck in the medical system, the plane’s poor old Capt. Redfern, ended up with his head bashed by helpless doctors, after his vampire instincts got the better of him. So maybe Ansel's wife had the right idea.