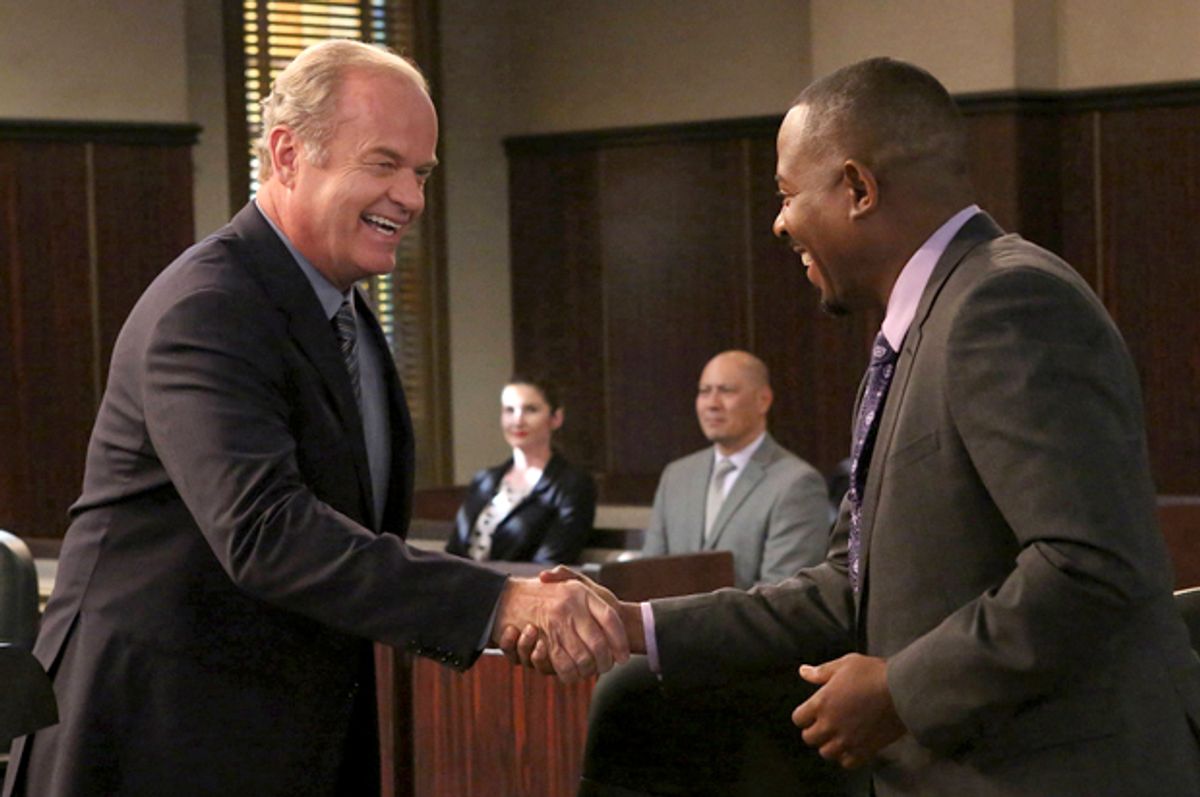 In the 1990s, Martin Lawrence and Kelsey Grammer were two of the biggest TV stars out there -- Lawrence had an eponymous Fox sitcom, "Martin," as part of a programming block designed to capture black audiences unmoved by NBC hits like Grammer's "Frasier." Going by that ancient history, the pair might seem to be opposites: that's certainly what FX's "Partners" is betting on. And yet the show's first two episodes have revealed that these two have a lot in common. Both seem, here, to be content to rest on their laurels, just going through familiar old motions rather than creating something actually new.

Lawrence and Grammer, here, play two attorneys who team up to try cases in assorted unconventional ways. By the second episode, "unconventional ways" means "pretending to be a gay couple in order to investigate a fraudulent wedding planner." I'm not sure what actors could have sold not one but two "Brokeback Mountain" jokes in 2014 (including "don't make a 'Brokeback Mountain' out of a molehill"), but it's not these two. Grammer's more or less doing Frasier, again, but with far less to play off of than he had back on NBC; Lawrence gives perhaps the lowest-energy performance I've seen on TV this year, sounding so halting in delivering his barbs that at times it feels as though he's reading his lines off cue cards. Both men are used to leading ensembles, and placed together as co-leads, both just seem morose. The show's very structure is odd, veering off to pay attention to Lawrence's mother and Grammer's daughter doing something completely unrelated to the action of the show once in a while.

The show represents a problem of modern celebrity: For the stars of yesteryear, it's gotten easier and easier to stave off obscurity, whether with a reality show or a half-baked sitcom. Any star who wants to stay famous can do so, even if said fame is more like notoriety. Grammer in particular just keeps working, which is admirable. But memories of "Frasier" are slowly getting overcome by the ghosts of Grammer's same-every-time delivery.

"Partners" is airing under the same "10/90" plan as FX's "Anger Management," which saw huge ratings in its first 10 episodes for those who wanted to keep up with Charlie Sheen; 90 more episodes were ordered. It's a bit harder to see a clear path to ratings success for "Partners," but the show operates according to the same principle. Did you like this star in a program that was tightly structured, had a great ensemble cast, and had the full resources of a network behind it? Then you'll love him in this weird new thing! We love celebrities in the context of what made them great, the early projects that challenged them. Rather than finding any new tools to play with, Grammer and Lawrence seem resigned simply to playing ideas of themselves.