Rebel without a Wi-Fi connection: China's war against "Internet addiction"

An amazing documentary goes inside a Chinese boot camp for "Internet addicts," only to find it's been Oprah-tized 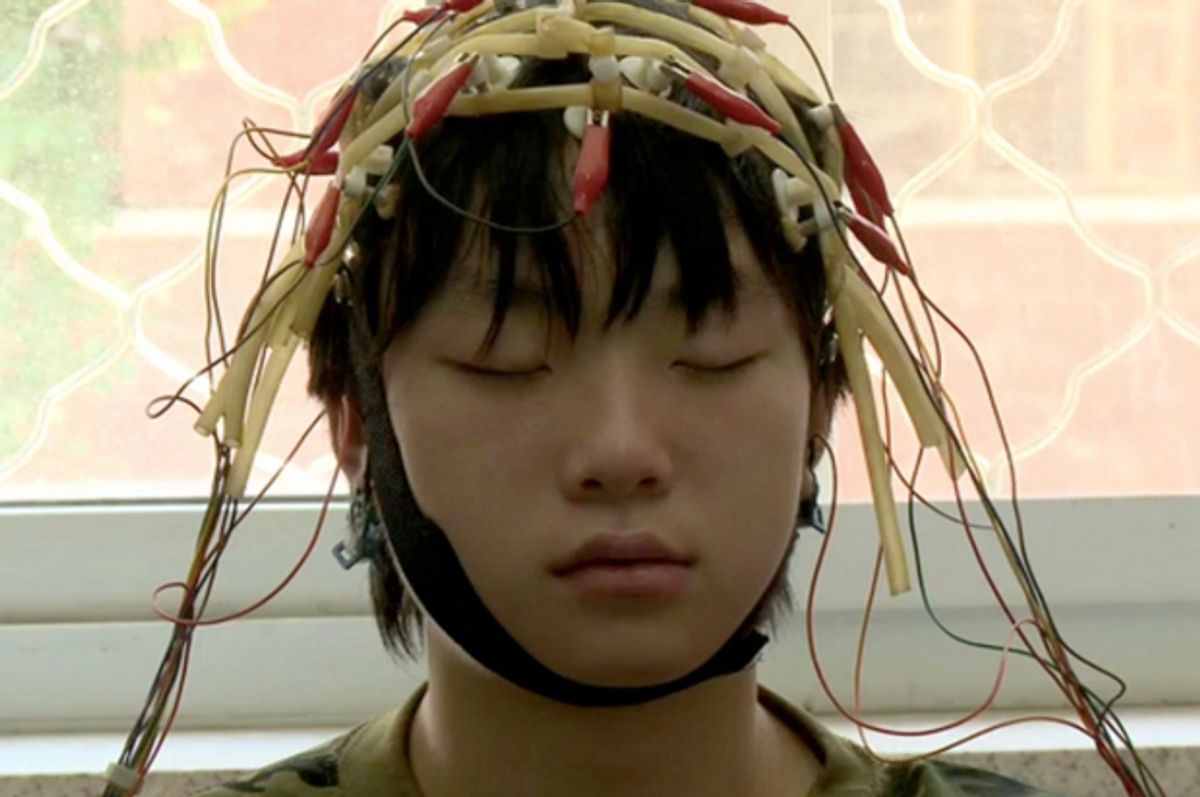 It’s time for lights out at the reeducation camp on the outskirts of Beijing. Some of the teenage boys stacked on the bunk beds around the dormitory are reading books by flashlight, while others are talking about girls (girls they’ve met online, in most cases) or how much they love to play "World of Warcraft" and other online games. One kid tentatively offers the opinion that he’s also happy in the real world. “Bullshit,” his friend responds, cracking up the whole room. Well, OK, the first guy answers – but he is happy when he gets to eat candy in the real world.

“Web Junkie,” a film by Israeli documentarians Shosh Shlam and Hilla Medalia, offers an extraordinary glimpse inside the Chinese mental health system that has grown up around “Internet addiction,” a proposed or hypothetical disorder that remains controversial at best among Western psychiatrists. (The question of whether many kids spend too much time playing video games, perhaps because they’re bored or unhappy or they find real life too fake, as one quipster in this movie puts it, is quite different from the question of a medical diagnosis.) Chinese authorities have described compulsive online gaming as “electronic heroin,” and insist that it poses a greater threat to Chinese youth than drugs, alcohol or gambling. There are more than 400 boot camp-style facilities designed to treat supposed Internet addicts in China, and somehow Shlam and Medalia got unfettered access to this one, where the vibe is about halfway between a juvenile prison and a mental hospital.

While the daily regime at this facility is undeniably strict, and we hear alarming stories about parents lying to kids or even drugging them to get them in the door, this isn’t “One Flew Over the Cuckoo’s Nest.” While “Web Junkie” focuses mainly on the teenage inmates, it also paints a sympathetic portrait of the well-meaning doctors and therapists struggling with a phenomenon they know they don’t entirely understand. Shlam and Medalia never directly argue the medical merits (or lack thereof) of the Internet addiction diagnosis, nor does this compassionate and rewarding film about life inside a forbidding institution ever condescend or seek the moral high ground. Instead, it’s a snapshot of a society facing internal turmoil and intense generational conflict, an immense nation adjusting to traumatic change and a traditionally reticent culture confronting its emotional life in public for almost the first time.

Actually, any Westerner should be cautious about making the latter claim, so let me hedge that a little: Perhaps the most fascinating aspect of “Web Junkie” – after the amazing fact that Shlam and Medalia were allowed to make it in the first place – is the way it defies stereotypes about the nature of Chinese culture. Most of us in the West have been told that China is an ordered and disciplined society devoted to education and hard work, where people are reluctant to display emotion, except perhaps among family members and intimate friends. What we see in “Web Junkie” is like the looking-glass version of that China, as if Oprah and Dr. Phil had invaded and conquered the place without anyone noticing. With an assist from James Dean – the kids in this movie seem to have been shaped by archetypes of generational rebellion that presumably were not visible in China until recently.

Parents and children alike break down and cry in therapy sessions. They confess to abusive behavior or openly threaten each other with violence. One angry young man asks his mother on the phone if she’ll cry when she’s holding his ashes the next day. Later, when a therapist asks him if he feels any empathy for the pain he’s caused his parents, he replies, in withering tones of mockery and contempt: “I’m too lazy to notice them.” Indeed, the teenage residents of this Wi-Fi-free institution are openly cynical about the entire enterprise, from the faux-military discipline to the patriotic songs to the dubious psychiatry. In one scene, a group of boys sit around on their bunks trying to outdo each other in mock-sincere displays of contrition, while the others bust a gut laughing. “I find Professor Tao’s lectures deeply touching,” says one. “When I get out of here I’m going to apply myself and study hard,” says another. A third gazes meaningfully into the camera and says, “If anyone out there watching this movie believes they have a problem …”

One way of understanding “Web Junkie,” in fact, is that the same social forces that drive Chinese teenagers into all-night Internet cafes – one kid in the movie brags that he once played "Warcraft" for 300 hours, with only a few nap breaks, and even if that’s a gross exaggeration it’s impressive – has also made people willing to cry before strangers with cameras and to view the supposedly treasured values of hard work and discipline with open derision. In that reading, the stereotypical or traditional view of Chinese culture I mentioned earlier contained the seeds of its own destruction. The aforementioned Professor Tao, staff psychiatrist at the facility, tells a parents’ group that Chinese families have worried too much about good grades and hard work, and have neglected their kids’ emotional needs.

Although the Chinese government has officially labeled Internet addiction as a clinical disorder, the authorities we meet in “Web Junkie” don’t seem convinced that explains everything. Professor Tao, even clad in his military uniform and officious demeanor, cagily circles the point: He explains to the filmmakers that his task is to figure out “whether or not this is a disease,” and suggests to a group of parents that loneliness and social isolation are what drive their kids to spend 10 hours a day playing "World of Warcraft." As Tao is no doubt aware, many Western shrinks believe that compulsive Internet use is more likely to be a symptom of a diagnosable mental disorder than an addiction in its own right.

Most of the kids in “Web Junkie” deny they have a problem at all. “It’s not a real disorder,” one tells the camera near the end. “It’s a social phenomenon.” Surely that will be the reaction of most Westerners who see this film: The Internet is taking the blame for cultural shift and generational conflict in China, much as comic books, rap music and violent movies variously have in our society. Still, it’s one hell of a social phenomenon, and all parents will cringe at the stories herein: Kids who get kicked out of school and go full vampire, spending all night every night in Internet cafes and running up thousands of dollars in debt. Despite the highly specific context of an ancient and traditional culture that has suddenly become a vast economic power, the human stories in “Web Junkie” are instantly identifiable, stories of a world where everyone has been brought closer together and simultaneously kept apart.

“Web Junkie” is now playing at Film Forum in New York, with other cities and home video to follow.