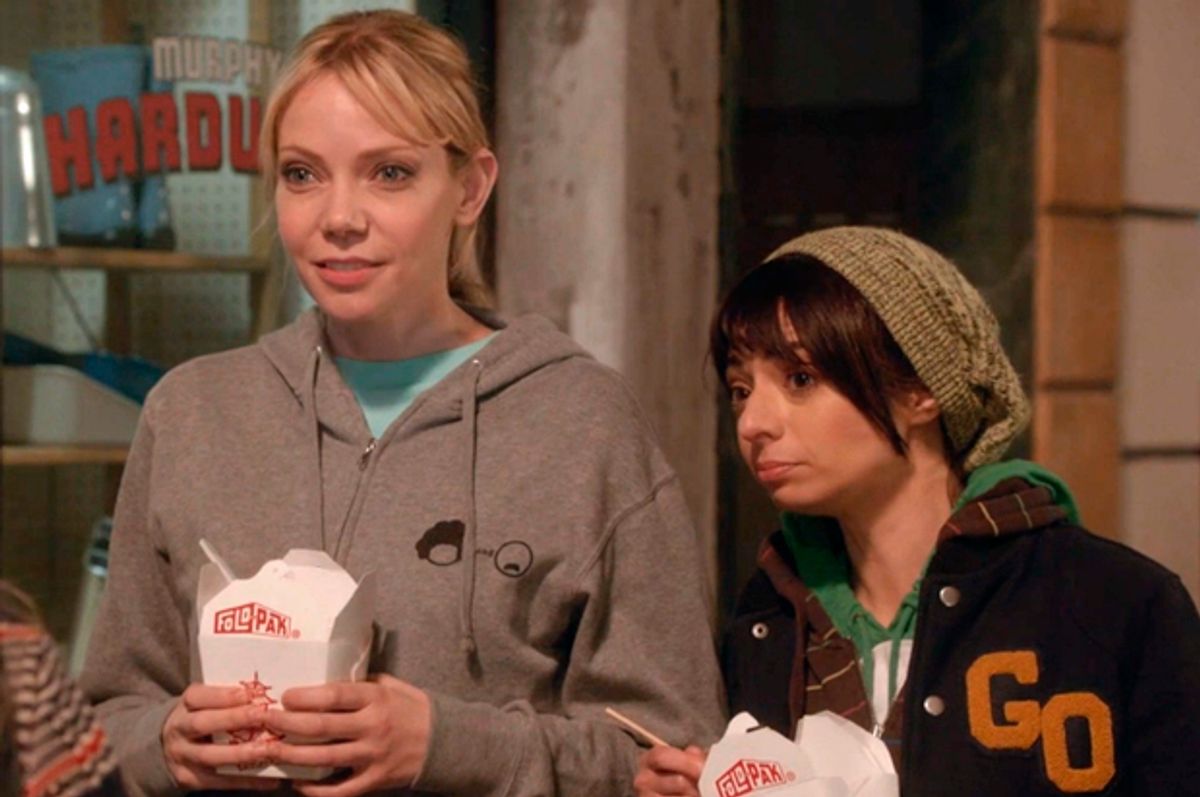 Riki Lindhome and Kate Micucci in "Garfunkel and Oates" (IFC)
--

It's inevitable that any new show that diverges from the mainstream will get lumped in with something successful that came before. Because it's a show about women who are unapologetically sexual, "Girls" was compared widely to "Sex and the City"; it became clear that the two shows had nothing in common shortly before "Broad City" came out, and got called the anti-"Girls." (Then again, every single show involving women released since "Girls" has been compared to "Girls.")

It's easy to see why these comparisons, in particular, flourish: There are so few shows created by women and about women's lives that there are only a few reference points for any new iteration. "Garfunkel and Oates," which premieres tomorrow night on IFC and has an episode already available for preview online, is nothing like "Girls" or like "Broad City" or "New Girl." It's totally unfamiliar -- which is the healthiest possible thing for TV.

The show, titled as creatively as "Maron" or "Louie," stars Kate Micucci and Riki Lindhome, who make up the musical-comedy group Garfunkel and Oates. The pair have had success on YouTube with musical numbers including "Sports Go Sports" and "29/31," and they intersperse some music into their TV series. The show proves why YouTube sensations can make for great television stars; having worked out their relationship and sensibility for years, Micucci and Lindhome have created a show that feels more or less fully formed from the early going, a rarity for new comedies.

Oddly, though, the show's best stuff is isn't musical; I had presumed that the interstitial material binding the songs would be not much to write home about, but in addition to forming much of the running time of the show, it's far stronger. Micucci and Lindhome prove they're ace physical comics as they dare themselves to go full-"Little Mermaid" -- to refuse to speak at all to their new dates and see how long it takes the men to notice. (One doesn't at all; one isn't bothered.)

It's an ingenious conceit, and one that's frankly far stronger than the show's centerpiece musical number -- a restaged "Sports Go Sports," which is weirdly militant about the pair's disdain for sports on TV without saying very much. The nonmusical parts of "Garfunkel and Oates," by contrast, go down idiosyncratic, weird avenues; a running gag about Micucci's childish drawings towards the end of the episode made me understand exactly who she was.

Comedy, especially, works through its specificity -- any comedy that relied on archetypes that could be easily compared to another show wouldn't be funny, and wouldn't last long. "Garfunkel and Oates" should be compared to the likes of "Broad City" only because it represents the work of women creators coming to prominence through hard work on early projects and getting to do exactly what they want. After that, comparisons fall flat -- a sign of the show's success.