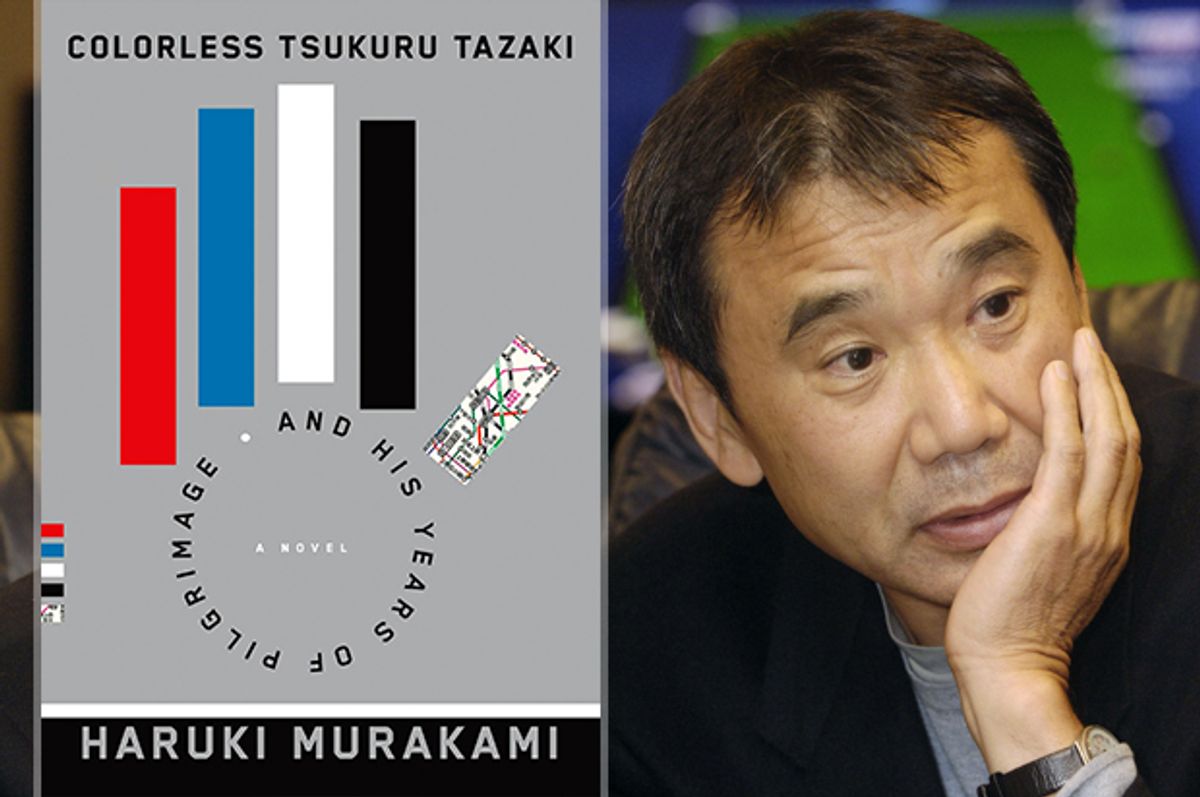 In recent years, the novels of Haruki Murakami have fallen into two general types: mammoth and intricate doorstops filled with the Japanese author's favorite motifs -- lonely men, enigmatic women, cats, commuter trains, 24-hour cafes, religious cults, jazz or classical music spun on vinyl records, cooking for one, sinister rich men, portals between alternate worlds, etc. -- and shorter, less news-making mood pieces. For every "Wind-Up Bird Chronicle" or "1Q84," there's a minor work like "Sputnik Sweetheart" or "After Dark." The fans (and Murakami's international fans are legion, the stuff of legend) tend to prefer his epics, but those small novels have their particular charms; "Sputnik Sweetheart" is Murakami's take on Michelangelo Antonioni's midcentury modernist film classic, "L'Avventura," and "After Dark" is a paean to the smoky world of late-night jazz clubs. (Murakami used to manage such an establishment.)

Not least of these shorter books' strengths is the way they trample the coyness and elision that plagues so much American literary fiction on the same themes. Murakami's latest, "Colorless Tsukuru Tazaki and His Years of Pilgrimage," is the story of a man convinced that he's "an empty vessel," incapable of forming lasting bonds with others. "People come to him, discover how empty he is, and leave. What's left is an empty, perhaps emptier Tsukuru Tazaki, all alone." The novel recounts Tsukuru's long effort to chip away at his frozen insides, culminating in meetings with the members of a group he belonged to in high school. The five of them, two girls and three boys, formed "an ordered, harmonious community of friends" -- a sort of Eden -- until Tsukuru's sophomore year of college, when the other four abruptly and absolutely broke off all contact with him, refusing to explain why.

The novel's chapters alternate between the present-day Tsukuru, now a train station designer in his late 30s, and episodes from his past: his near-suicidal grief at being cut off by the group and a halting connection he later forms with a younger man he meets at his college's swimming pool. Uncanny dreams, nocturnal specters and intimations of a dark alter-ego, as well as several odd, but brief digressions on such subjects as creepy business management philosophies and people with hyperdactyly (six fingers) provide the trademark Murakami eeriness. Yet the central narrative here is far from outlandish: one man's journey from isolation and self-doubt toward a renewed capacity for love.

Another hallmark of Murakami's fiction is his direct, neutral, unvarnished and unprettified prose style. The British novelist and critic Tim Parks has complained that this makes Murakami an exemplary producer of the "dull new global novel," a work purged of all "wordplay" and idiosyncratic local flavor in order to facilitate easy translation and "to remove obstacles to international comprehension." But the idea that Murakami has adopted such a style in order to secure an international fan base is laughable; rarely has there been a literary crowd-pleaser who's evinced less interest in pleasing crowds. Rather, the almost generic quality of Murakami's prose represents an effort to strip away the distraction of style itself; he has other fish to fry, and writing fancy sentences is not one of them.

Neither is writing fiction that erects itself around a hollow space in which the reader is meant to infer a character's emotional state. This is a common technique in American literary fiction, sometimes entailing the notorious "epiphany" endings of what many people still think of as a typical "New Yorker story." (New Yorker stories are actually pretty varied these days.) The author avoids clearly stating what her character feels, and the reader, having absorbed and noted the careful structure of sensual and contextual details, is supposed to arrive at an understanding at the same time as the character himself. A little mystery is constructed around the character's thoughts and feelings that the reader is expected to solve.

By contrast, take this scene from "Colorless Tsukuru Tazaki and His Years of Pilgrimage," in which a young man accompanies a retired pianist to a school auditorium in a remote mountainous province so that the pianist can vent a passing desire to play. The performance turns out to be transportingly "soulful," and the young man experiences "the straightforward beauty of the music overlapped with the fresh, oxygen-rich air and the cool, clear water of the stream, all of them acting in concert." Nothing could be plainer than the language Murakami uses to describe the scene, and then he ups the explicitness of the passage by noting that the young man "felt all that was unclean inside him washed away."

The average American literary novelist would repudiate such a line; in an MFA workshop, it would be redlined by every fellow student. It's a cliché; it's telling rather than showing and above all it refuses to conjure a mystique around the character's feelings in order to make them seem shaded, delicate and ineffable, like a butterfly whose wings would be destroyed if touched by human hands. So much of American literary technique involves euphemistic depictions of psychological states with the apparent belief that you can make a banal emotion or situation affecting if you just don't describe it too directly.

Murakami, on the other hand, doesn't really care whether his character's moment of inner purification is banal, or at least banally expressed. He simply doesn't give a shit. The pianist is about to explain that the wrapped object he placed on top of the instrument as he played somehow guarantees his imminent death and at the same time endows him with exquisitely developed senses. He's going to suggest that his young listener is one of the few people in the general run of humanity capable of accepting this object from him, of taking on the burden of approaching death and also attaining a "perception that is pure and unadulterated." This development and its effect on the young man is more significant than spinning elaborate allusions to feelings -- feelings that are, in fact, quite adequately delineated by saying that the uncleanness he felt inside had been washed away.

This is not to say that "Colorless Tsukuru Tazaki and His Years of Pilgrimage" hasn't got its share of figurative language. Murakami can fashion some remarkable similes when he so desires. "The human heart is like a night bird," Tsukuru thinks at one point. "Silently waiting for something, and when the time comes, it flies straight toward it." But what this novelist seeks to do with his fiction works on the level of motif, of scenes and, above all, of story, rather than on the level of sentences and style. The result is more convincing, more tantalizing and more moving than a dozen artfully crafted epiphanies. Murakami realizes that the night bird of the human heart is filled with so much mystery that you really don't need to drum up more of it with allusions and indirection. You can speak as clearly as possible about what we feel -- and Murakami's characters tend to be as forthright as their creator -- and still never get to the bottom, never exhaust the unknowable that lives inside all of us.