The right's "plagiarism" scam: How low it will stoop to protect Reagan's legacy 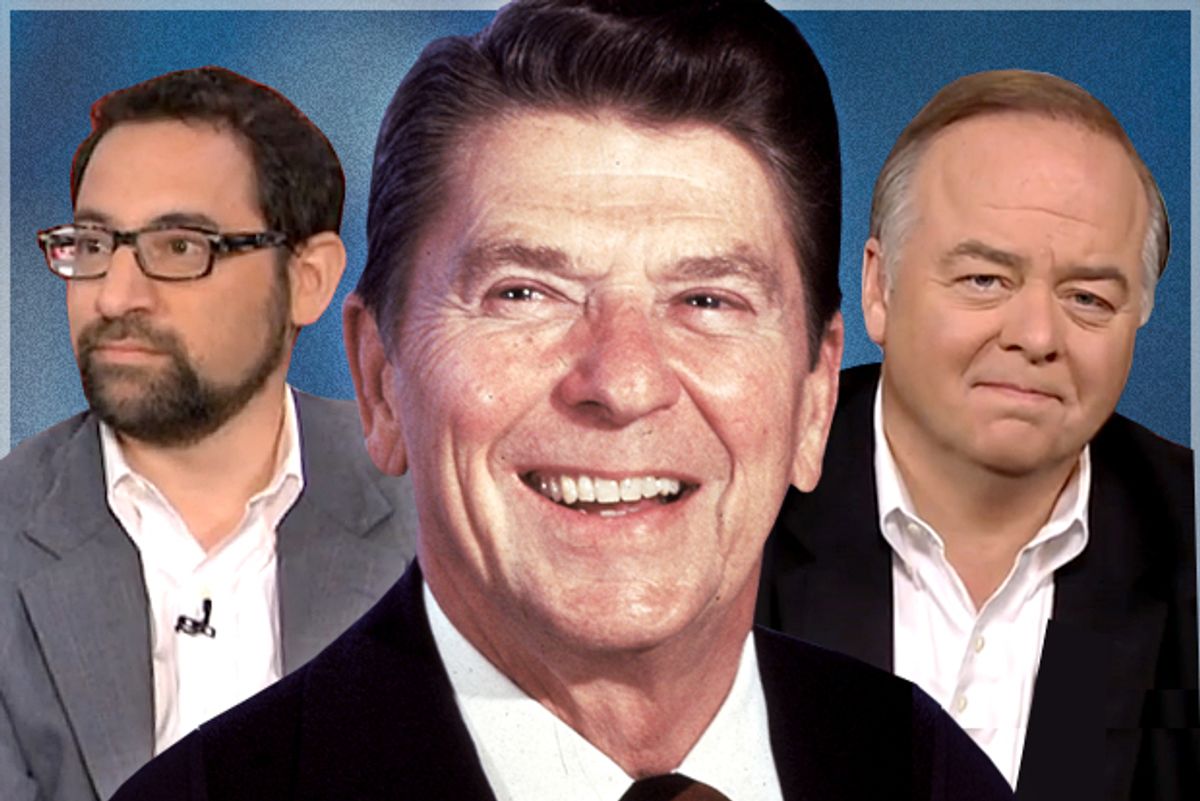 Last week, I published an interview with Rick Perlstein, author of "The Invisible Bridge: The Fall of Nixon and the Rise of Reagan." And this week, as the book gets released, Perlstein has been mired in a ginned-up scandal, validated by he-said/she-said journalism from the New York Times.

According to a Reagan biographer who currently serves as the publicist for Ann Coulter, Perlstein is a serial plagiarist. Only this accuser has defined plagiarism down to “quoting with full attribution” and “using the same historical facts.” The resulting controversy has enmeshed Perlstein in a political war he had no idea he was fighting. “I feel like a character in one of my books,” he told Salon.

Perlstein saved his publishers about 100 pages of printing for his large tome by putting his source notes online. This allows readers to actually view the sources directly through Google Books and elsewhere, rather than having to hike out to a library to find them. And the voluminous use of contemporary accounts contributes to Perlstein’s signature style, putting the reader into the heart of historical events in the way ordinary Americans would have experienced them.

On 125 separate occasions, Perlstein cites a 2005 book by Craig Shirley called "Reagan’s Revolution: the Untold Story of the Campaign that Started It All." Perlstein even writes in his acknowledgments that “Craig Shirley’s book on Reagan’s 1976 campaign saved me 3.76 months” of research and labor. So he makes clear that he relied on Shirley’s account, and used the facts contained therein, with attribution, to shape his narrative.

But Shirley, a longtime conservative figure (he’s worked on independent expenditure campaigns for both Bushes and Ronald Reagan), now the president and chief executive of Shirley & Banister Public Affairs – with a roster of conservative clients like Ann Coulter, Citizens United, the Tea Party Patriots and Dinesh D’Souza’s movie "Obama’s America: 2016" – had his lawyer send two letters to Perlstein’s publisher, Simon & Schuster, alleging copyright infringement. The letters can be read here and here.

In the letters, Shirley claims that Perlstein lifted “without attribution” passages from "Reagan’s Revolution," and substantially ripped off his work even when attributing. He demands that all copies of "The Invisible Bridge" be destroyed, with an additional request of a public apology and $25 million in damages.

Rick Perlstein would have to be the worst plagiarist in history, by citing his victim 125 times in source notes and thanking him in the acknowledgments. Perlstein even corresponded with Shirley during the writing of the book, interactions he describes as “cordial.” Shirley’s lawyers claim the interactions were akin to how “a hit-and-run driver might return to the scene of the crime.”

In truth, Perlstein’s “plagiarism” amounts to paraphrases of historical events with numerous citations, an entirely in-bounds tactic for works of history. The American Historical Association defines plagiarism as appropriating “the exact wording of another author without attribution,” or borrowing “distinctive and significant research findings or interpretations” without citation (I quoted so as to not be accused of plagiarism!). Perlstein is guilty of neither: He cites Shirley repeatedly, and he does not use exact wording. Nor does he reach similar conclusions from the material, as a movement conservative like Shirley would surely agree.

Simon & Schuster responded to the letters here, by arguing that “any similarity between facts in non-fiction books – even if first reported by Mr. Shirley – does not support a claim of copyright infringement.” In fact, it’s self-evident that facts should remain similar over the course of histories of the same time period. Perlstein believes he merely built upon the historical record that Shirley helped register in his work.  “He doesn’t like the way I do history,” Perlstein told Salon. “He thinks that if he digs up facts by the sweat of his brow that nobody else can use them. In fact, courts have used that exact phrase, ‘sweat of the brow,’ to say that there’s no copyright protection for such facts.”

In many cases, Simon & Schuster notes, Shirley alleges copyright infringement based on third-party quotes found in other sources. For example, Shirley claims that Perlstein stole a quote of Nancy Reagan’s from him without attribution, even though the quote appears differently in the two books. In Shirley’s, Nancy says “That’s what I like to hear”; in Perlstein’s, she says “Now that is the kind of talk I like to hear.” The quotes differ because Perlstein got it from a different book called "PR as in President" by Victor Gold, which is whom he cited in his source notes.

In another allegation, about a hotel manager threatening to throw out the Pennsylvania delegation at the 1976 GOP convention, Perlstein’s source is Time magazine, not Shirley (although he gives secondary attribution to Shirley anyway). Shirley even tries to claim copyright on a CBS News report of the number of delegates that Gerald Ford had attained near the end of the 1976 primaries.

A final claim of Shirley’s reveals too much. Shirley says Perlstein stole his line about Reagan watching the chaotic last night of the 1976 convention on television, “dissolved in laughter” (which is cited). But Shirley doesn’t add the line in "The Invisible Bridge" that comes afterward: “Then, he saw a televised image of himself on television watching it on television – that doesn’t look good – and his smile disappeared.” This additional insight, building on previous work and incorporating this cunning quality to Reagan, also came from a contemporaneous report in the Atlanta Daily World. As Dave Weigel writes, “In Shirley's version of the story, Reagan was underrated once again; in Perlstein's, he is underrated but calculating.”

In addition, Shirley’s P.R. associate Diana Banister sent a mass email (see below) seeking “help in our offensive” against the book. “Anything you can do to jump into the fight would be helpful,” the email reads, even offering to provide supporters “suggested tweets.” So the motives here are clear: a dressed-up attack on scholarship that’s really a calculated political broadside. Little of this comes out in the New York Times story on the controversy, which adopts a maddeningly neutral pose for a situation that demands a referee to sort out the claims. The story just dispassionately laid one set of charges against the other, adding that “the dispute casts a shadow” over the book’s release. Conservative Reagan supporters could rejoice that they got what they wanted, with the “paper of record” honoring their claims and wounding the scholarship of a popular historian, creating a cloud of doubt around his research. Already, Paul Krugman has criticized his paper for “opinions differ on the shape of the planet” reporting. The Times’ public editor, Margaret Sullivan, is on vacation this week and did not respond to a request for comment.

It’s perhaps fitting that a book that depicts the rise of the conservative right then gets slimed by the very types of movement conservative operatives that populate its pages. The affair has not changed Perlstein’s appreciation of Shirley’s work. “If somebody took my book and developed the ideas in it and built upon it, I would be happy,” Perlstein told Salon. “I want people to read Craig Shirley’s book. He wants to shred mine.”