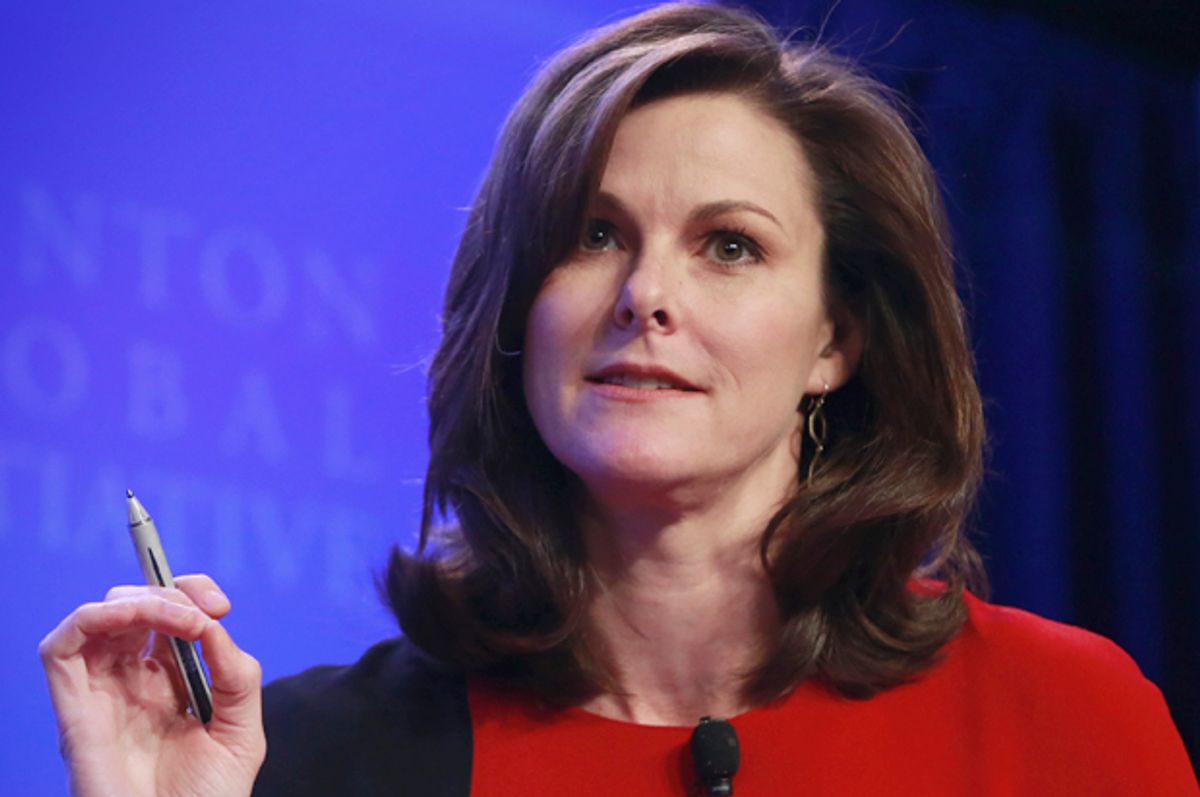 Last week, former CNN anchor turned anti-union crusader Campbell Brown stopped by “The Colbert Report” to tout her new organization, the Partnership for Educational Justice, and a lawsuit the group has brought seeking to do away with teacher tenure in New York. The case takes its inspiration from a recent ruling in California in which a judge ruled the state’s tenure laws violated students’ right to a “sound, basic education.”

But despite her group’s pledge to “bring transparency” to the education debate, Brown’s campaign against the teachers unions has been dogged by questions about its financial backers. In the weeks since launching the Partnership, Brown has repeatedly deflected questions from reporters about her donors, saying simply that they hail from “both sides of the aisle.”

In her appearance on "The Colbert Report,” Brown did little to quell suspicion. "I’m not going to reveal who the donors are because the people are out,” she told host Stephen Colbert, pointing to a window where a dozen or so protesters had gathered with signs reading “Campbell Brown doesn’t speak for me” and “Who funds you?” Brown said that if she disclosed her backers, critics “are going to go after people who are funding us.”

Well, yes, that’s usually how public debates work. Those interested in the outcome of a policy question or seeking to make a change don’t just get what they want automatically; they have to make their case. This often involves pushback from those who disagree with you — your motives are questioned, your connections. People say unflattering things about you. Sometimes, meanies in the opposite camp even take to the streets to express their views. Democracy isn’t always nice; it requires, in the words of Supreme Court Justice Antonin Scalia, “civic courage.” If the pearl-clutching millionaires behind Campbell Brown’s lawsuit are too emotionally fragile to withstand any sort of public scrutiny, they have no business wading into a debate whose outcome will affect millions of students.

Brown’s secrecy about her funders is especially unconscionable given her background as a journalist. Her organization claims it wants to encourage debate about public education. But if anything, the Partnership’s lack of transparency only makes open dialogue more difficult. Without knowing who is behind the effort to get rid of teacher tenure, it’s difficult to tell if they are acting in the best interests of students or whether they are among the for-profit education entrepreneurs looking to cash in on the privatization of public education, which has become a multibillion-dollar industry.

Brown’s caginess about her funders also runs against her group’s own interests. The Partnership has paired its lawsuit with a public-relations push by the Incite Agency, founded by former White House press secretary Robert Gibbs and former Obama campaign spokesman Ben LaBolt. But rather than focus on the plaintiffs behind the case or teacher-tenure policies, most of the media attention has centered around the organization’s financial backing and its celebrity spokesperson.

Quite simply, why keep the identities of your backers secret if you have nothing to hide?

Perhaps the motives behind Brown’s lawsuit would be less suspect if she were better informed about the academic research on education (the Washington Post has a good piece fact-checking Brown’s statements on "The Colbert Report”). But not only is there no research establishing any connection between teacher tenure and student outcomes; low-performing schools tend to have higher rates of teacher turnover. It’s not hard to see why: While union-busting education reformers like to portray teachers at underperforming schools as incompetent and resistant to change, it’s actually much harder to teach at a struggling school with tons of low-income kids.

One of the talking points Brown has mentioned repeatedly on the media circuit is that “91 percent of teachers [in New York] are rated effective or highly effective, and yet 31 percent of our kids are reading, writing, and doing math at grade level.” The logic here is that we should fire any teacher who fails to bring his or her students up to speed. But if teachers are evaluated on student performance alone, which person in their right mind would sign up to teach at a struggling, inner-city school?