Charles Koch's affront to MLK: How a right-wing tycoon got horribly confused

Billionaire right-winger invokes the civil rights leader to support his agenda ... of union busting and feudalism 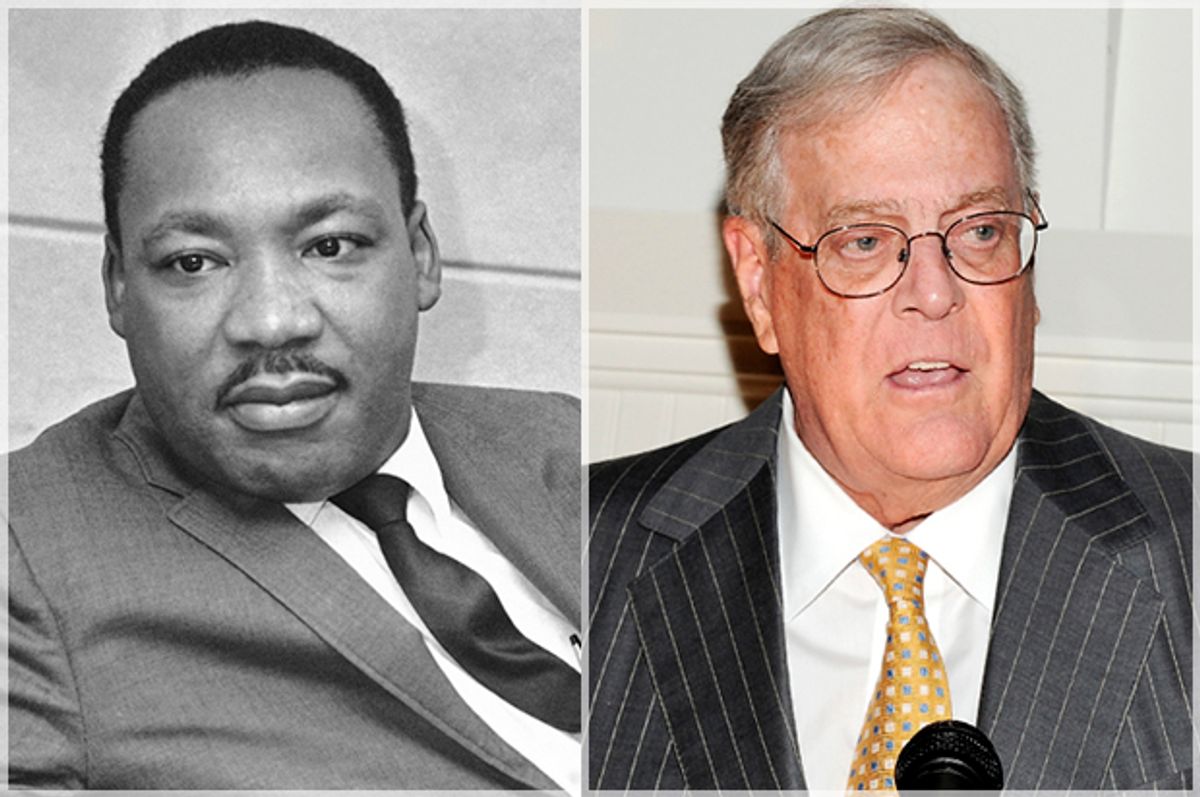 You’ve got to hand it to Charles Koch: The man doesn’t want for self-confidence. The Kochs and their allies are taking a page from Sen. Rand Paul and trying to dress up their free-market, anti-union, welfare-slashing 21st century feudalism as the answer to persistent African-American unemployment even as the economy recovers under President Obama.

Unbelievably, Koch invokes Dr. Martin Luther King Jr. as an ally in a stunning USA Today Op-Ed, “How to really turn the economy around,” which is essentially an argument for deregulating business, slashing welfare programs and forcing low-wage work on the poor in the name of the ennobling power of employment.

With laughable Koch paternalism, he shares life lessons from his father, Fred, an oil industry magnate and John Birch Society founder: “When I was growing up, my father had me spend my free time working at unpleasant jobs,” Koch tells us. “Most Americans understand that taking a job and sticking with it, no matter how unpleasant or low-paying, is a vital step toward the American dream.”

Not only does Koch fail to mention that he was the son of a very wealthy man when he worked those “unpleasant jobs,” he cites Dr. King as someone who agrees with him that “there are no dead end jobs.” (The Kochs, by the way, also fund “educational” groups that oppose the minimum wage.)

"If a man is called to be a street sweeper,” Koch quotes King, “he should sweep streets so well that all the hosts of heaven and earth will pause to say, 'Here lived a great street sweeper who did his job well.'"

This from a man who himself joined the John Birch Society in the mid-1960s, while it was targeting King as a “communist.”

Koch is right about one thing: King was indeed a great admirer of street sweepers. In fact, he was murdered visiting Memphis to fight for the right of city sanitation workers to join a union. Invoking King on behalf of his low-wage, union-busting, anti-minimum wage agenda is despicable, but Koch apparently thinks his money can buy him anything, including the right to claim King’s legacy.

He’s wrong. King died, by the way, while supporting AFSCME, the union representing the Memphis sanitation workers. AFSCME honored Dr. King by making the painful yet correct decision to end a partnership with the United Negro College Fund after UNCF accepted $25 million from the Kochs to establish a “Koch Scholars” program for black students. UNCF head Dr. Michael Lomax also dignified the annual Koch Summit, which plots its right-wing, free-market strategy, in June, alongside Republican senators and right-wing think tankers.

Along with their UNCF donation, which the Kochs widely publicized, Charles Koch’s Op-Ed represents a new front in their public relations battle. Neither their billions in wealth nor their trademark political stealth have served to insulate them from criticism and scorn. When asked about the Koch brothers, a recent George Washington University poll found that most people surveyed hadn’t heard of them, but 25 percent had negative feelings vs. 13 percent who had positive feelings. That’s bad news for a duo who have tried to keep their political activities undercover.

They apparently believe that funding African-American Koch scholars and invoking Dr. King can convince black voters they’re not the enemy. But quoting King on the dignity of street sweepers while forgetting – or never knowing – that he died while fighting for their right to unionize is at best boneheaded, at worst disrespectful. It won’t convince many Koch doubters.

Charles Koch’s billions can’t buy King’s legacy or King’s blessing for his radical far-right agenda, which opposes everything King stood for. But he probably can afford better ghostwriters.