"What If": Daniel Radcliffe and Zoe Kazan star in a sparkling, old-fashioned rom-com 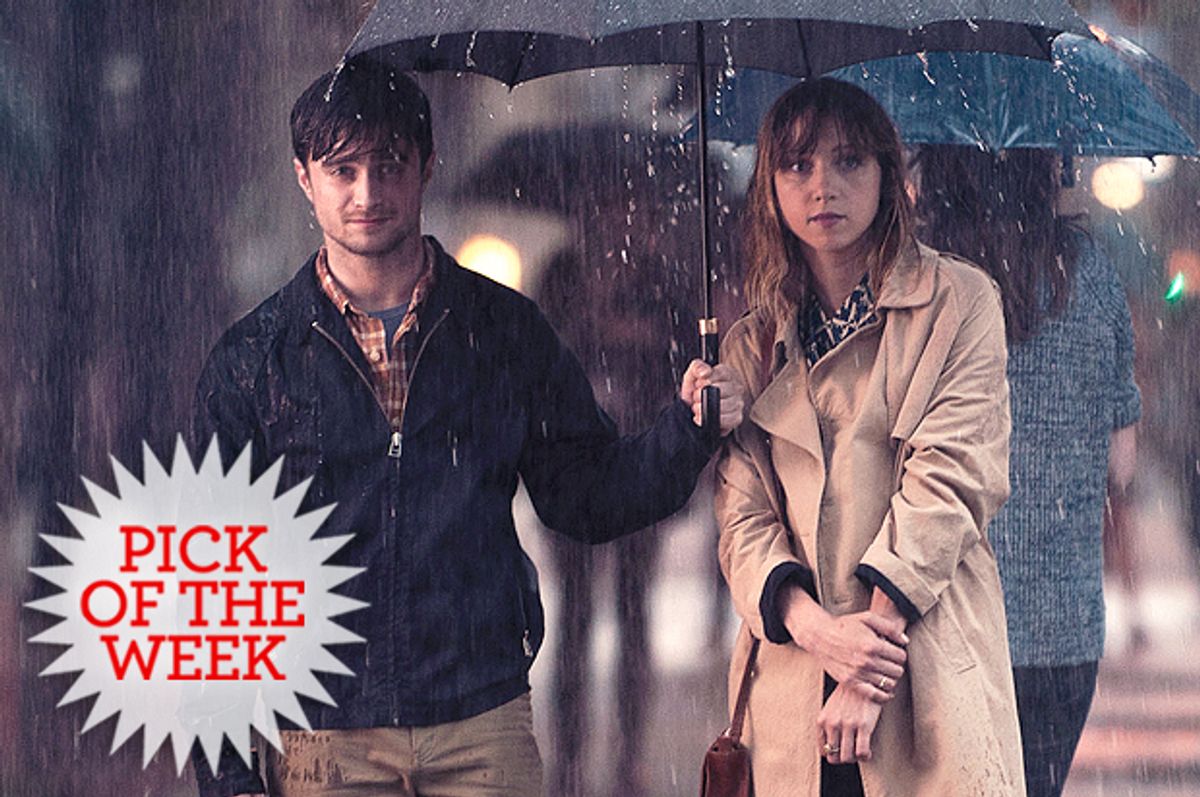 Daniel Radcliffe and Zoe Kazan in "What If" (F Word Productions)
--

Once you get past the Canadian setting, the 21st-century sexual ethics and the thematic reappearance of a truly disgusting sandwich concoction known as Fool’s Gold, there’s nothing unfamiliar or unconventional about the thoroughly charming indie rom-com “What If” – but that is precisely this movie’s secret. What seems at first like an unlikely pairing between Daniel Radcliffe and Zoe Kazan yields both intellectual and emotional crackle, and Elan Mastai’s screenplay is a return to rom-com basics of the 1930s, if not the 19th century. It keeps the two principals apart as long as possible, through means both plausible and ludicrous, compelling them to connect as verbal sparring partners and agree to ignore the obvious fact that they’re crazy about each other. “What If” could be the breakthrough film that underappreciated Canadian director Michael Dowse (“Goon” and “It’s All Gone Pete Tong”) has been waiting for, and at any rate it’s a sparkling screwball highball, perfect for a late-summer weekend.

At age 25, Radcliffe still bears a resemblance to the near-adult wizard of the last two or three films of the Harry Potter series. But after this film and playing Allen Ginsberg in “Kill Your Darlings” (and his upcoming role, with horns, in Alexandre Aja’s horror film “Horns”) he has pretty much completed the transformation into an entirely respectable grown-up actor. If he’s not likely to ever be half as famous as he once was, I can only imagine he’s delighted about that. In “What If,” he plays a lovelorn medical-school dropout named Wallace, a hangdog but handsome fellow who’s probably sick of people telling him he looks like Harry during one of his Hogwarts-sulk scenes. In the very first scene he makes an instant connection over misanthropic fridge-magnet poetry with Chantry (Kazan) at a party where they both feel like outcasts. At the end of the evening she says, yeah, she’d love to hang out sometime and, oh, will you look at the time? Her boyfriend will be wondering where she is.

You could argue that Dowse and Mastai are working slightly against stereotype here, in making the good-looking Radcliffe the sad sack, and casting Kazan, a winsome gamine with something of a wounded-deer demeanor, as the super-together young woman who’s in a Serious Relationship but has no problem being just-friends with a guy. But that’s a minor point and anyway pairing up the handsome fella and the funny-looking girl is an ancient romantic ruse, one that works subtle psychological magic on the audience that I won’t attempt to decode. What’s clear is that Wallace and Chantry crack each other up right away with gruesome gags about the deaths of Elvis and Marie Antoinette, or the details of the aforementioned sandwich. (Which Dowse helpfully illustrates in a vomitous montage: A loaf of Italian bread, slathered with butter and baked, then stuffed with entire jars of peanut butter and jelly and a pound of freshly crisped bacon. Yummy!)

I almost wish the filmmakers had found a way to keep Chantry’s nonentity lawyer-boyfriend, Ben (Rafe Spall), offstage for the entire film, since he’s not much of a character and his only narrative function is to serve as an obstacle and/or shared delusion. But I suppose the movie where he doesn’t exist and Wallace and Chantry are both deranged is not this movie, and anyway in that movie we wouldn’t get to see Ben “inadvertently” threaten Wallace with a chef’s knife, or see Wallace “inadvertently” shove Ben out a second-story window. You really have to work hard to make a pair of 20-something Torontonians in 2014 so ethical that they don’t act on their mutual attraction even after Ben takes a job in Dublin, where he may or may not be entertaining attractive Argentinean colleagues late at night. But it almost works: The idea is that Wallace and Chantry have both seen the effects of infidelity and cheating all around them, and are determined not to go there even at the price of unhappiness.

Dowse has a fine ear for dialogue and an eye for just the right doses of silliness and slapstick; he allows his two leads to bounce off each other in unpredictable directions, forging a connection so precious and fragile that we understand why they don’t rip off their clothes and go at it. There's a wonderful and nearly wordless scene between Wallace and Chantry that begins as dressing-room farce and ends in a nearly unbearable moment of intimacy. Adam Driver, the sleepy-eyed love-hate object from “Girls,” gets a terrific supporting role here as Allan, Wallace’s roommate and confidant, who is full of semi-helpful advice on how to shift the Wallace-Chantry relationship into a different key. (As Wallace sums it up, “You’re telling me to be sleazy, be conniving or be pathetic.”) Arguably the non-Chantry female characters are less satisfying, although Mackenzie Davis is a lot of fun as Allan’s girlfriend. The idea that Chantry’s slutty sister Dalia (Megan Park) wants to get her hooks into Wallace for unwholesome reasons is an intriguing complication, but one that’s not allowed to play out far enough to ruin Wallace’s almost monastic purity.

Unlike almost any recent Hollywood rom-com, Mastai’s screenplay actually sounds like real-life North American adults talking to each other. There’s certainly some frank sex talk and comic insults (my favorite: “Her thesis is probably about how to be a rat-faced whore!”), but “What If” never resembles the forced hard-R pandering or homophobic and misogynistic banter of so much post-Apatow screenwriting. I’m not claiming that this story of two young people pining for each other across months and years of chastity is especially realistic, but that’s really not the point. Like the happily-ever-after ending the genre demands, it’s a fantasy about how we sometimes behave in our better moments, or how we might behave in a better world, or how better people than us might behave, knowing the terrible things we know about love.