Do we need sexism ratings for music videos?

A new report from the U.K. calls for warnings for objectification 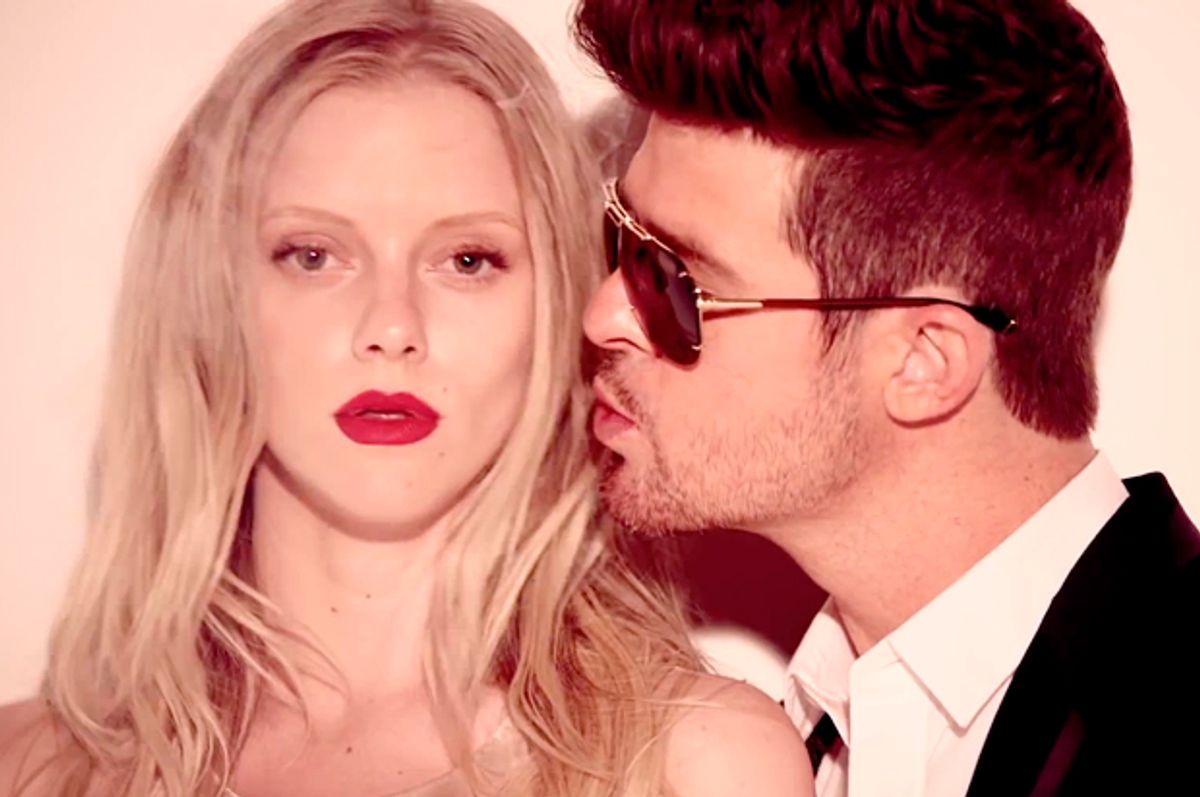 For decades, plenty of viewers have complained that there are considerably tighter restrictions around the violence our kids are exposed to in their entertainment than the sexism. But recently, that's begun to change. Last fall, Sweden introduced a Bechdel test addendum to its movie system, bestowing an "A" rating only to films that have two or more women in it who discuss something other than a man. Now, the authors of a new report out of the U.K. are asking for age ratings for "sexist and racist" content in music videos.

In a report with the incendiary title "Pornographic Performances," the End Violence Against Women Coalition has criticized the depiction of women in music videos as "endlessly sexually available," and said their research shows that "those who view such videos have been found to have an associated tolerance of racist, sexist and even rape-tolerant attitudes." Videos cited, predictably, included Robin Thicke's "Blurred Lines," Calvin Harris' "Summer" and Basement Jaxx's bootylicious "Never Say Never."

Of course, unrealistically sexualized images of women have been a part of music videos for as long as there have been music videos. It's been nearly 30 years since Robert Palmer's fembots sparked a feminist debate that could have given Robin Thicke and his models a run for their money, nearly 30 years since Tipper Gore and the Parents Resource Music Center successfully pushed to get advisory stickers on albums. (Ask your parents what an album is.) Hot chicks in music videos are not going away. Nor, by the way, are hot chicks in music videos and the like necessarily "pornographic" or inherently sexist. You can see Beyoncé right now on her current On the Run tour, grinding on a chaise like she's trying to get it pregnant, in a show in which the word "FEMINIST" also appears before the audience in large letters. Discuss!

But one thing that the report does get at – and that actually holds a flicker of promise for enlightenment – is that the focus of the conversation is not strictly about sex. It's about, instead, "the portrayal of women in very traditional gender roles in popular culture, with men representing characters of power and dominance." And encouragingly, the report further pays close attention to the way in which black women in particular are often portrayed -- as "hypersexual" and "wild and animalistic" in an industry in which "racialised tropes are deemed marketable."

Sarah Green of the End Violence Against Women Coalition notes that "Some forms of media, such as television and film, are well regulated and our society accepts and supports this," while "Other forms like music videos are getting away with very little scrutiny and as such seem to be competing for who can most degrade and insult women. If the 'creative' people who make them won’t stop this, regulators should rein them in and implement age ratings."

Plenty of music videos proudly sport a "mature content" distinction already, but imagine if what was going on in those videos was rebranded not as mature but something else. What if videos had a sexism or racism warning? Imagine a notice that a video depicts women, to borrow from the report, "being treated as a commodity by the men." It's not about presenting women as sexy. It's about asking that it be acknowledged when they're being presented as objects to be judged. Because that's not really mature at all, is it?