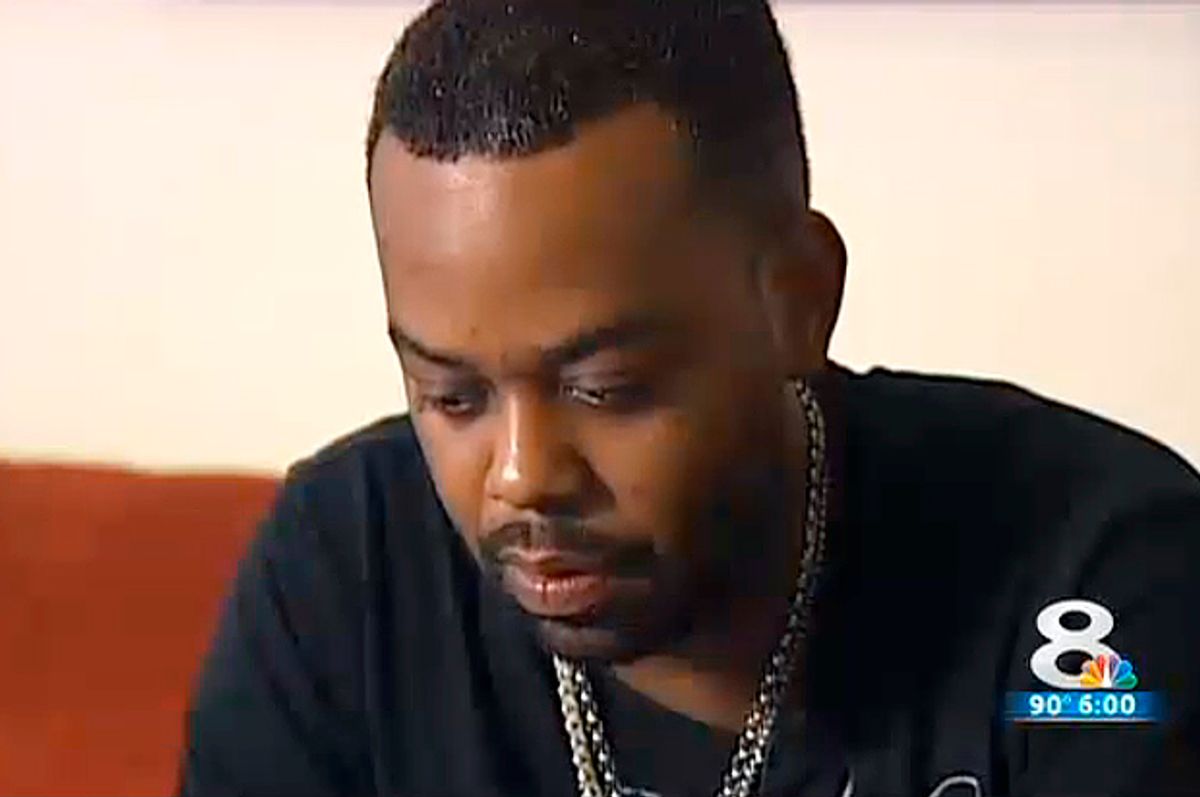 Julion Evans was only 42 years old when he died last month, after grappling for four years with the rare disease amyloidosis. His family, including his mother, Julie Atwood, wanted him to be remembered at the family church in Florida where she was baptized. But the day before the service, Atwood was standing at her son's casket during his wake when she got word from New Hope Missionary Baptist Church in Tampa. She says they told her that would be "blasphemous" to proceed with the funeral and that they were canceling it – because Evans was gay.

New Hope's pastor, T.W. Jenkins, says he only learned that Evans was gay when congregation members saw a mention of the man's surviving husband in his obituary -- and called Jenkins to complain. Evans and his husband, Kendall Capers, were together for 17 years before they married in Maryland last year. Jenkins told WFLA TV, "Based on our preaching of the scripture, we would have been in error to allow the service in our church. I'm not trying to condemn anyone's lifestyle, but at the same time, I am a man of God, and I have to stand up for my principles." Jenkins is such a man of principles that he initially agreed to an on-camera interview with the station's Shannon Behnken -- but when she showed up, the church was locked and her phone calls went unanswered. He also refused to respond to calls from the Tampa Bay Times.

It's fortunate that love and consolation can happen anywhere. They don't need a roof. They don't need a cross. Evans' family was left to find another venue with less than a day's notice, but Capers says, "Immediately I jumped out of grieving husband mode and launched into disaster recovery mode." The mourners wound up using the funeral home where the wake had taken place, though many mourners missed the event when they still showed up at the New Hope instead. Evans' widower, Kendall Capers, expressed to WFLA his understanding of the pastor's position, even though he and his family had hoped Evans would have a church service. But he added that the abrupt cancellation, in the midst of the wake, was "disrespectful" and "wrong."

It's perhaps unsurprising that a conservative Christian venue would find itself in a moral quandary over hosting a funeral for an openly gay man, one in which his grieving husband would be in attendance. If you are a church that is preaching against gay unions, if you're opposed to performing same-sex weddings, it would indeed potentially present a conflict to preside over a gay man's funeral. And maybe, had they known more in advance, New Hope could have spared Evans' family pain by stating, gently, their objections along with their condolences. And frankly, by the way, that's all still completely crappy and unenlightened and pretty much the exact opposite of what Jesus would do, but whatever. I'm just saying, I get that given the church's position, this information presented an awkward predicament to pastor Jenkins, who claims he had been on vacation and unaware of the situation until the last minute.

So let's think for a moment. What else could the spiritual leader of a congregation have done when the outraged members of his flock began calling and complaining about the prospect of a gay man's final blessing being bestowed there? Here's a thought. He could have led. He could have told those people who had a problem to look into the loving parts of their hearts, to see a grieving family who'd endured four years of pain and suffering, and were now in need of one final gathering of celebration and comfort. He could have said that they were not there to judge but to provide sanctuary and kindness. That sounds like less of a jackass move, to me, anyway. And as Kendall Capers says, "Regardless of our background, our sexual orientation, how can you wait that long and put somebody in a bind when they're going through a loss?"