"I am Groot": The secret environmental messaging buried in "Guardians of the Galaxy"

What "Guardians" sneakily captures about our conflicted relationship with the environment 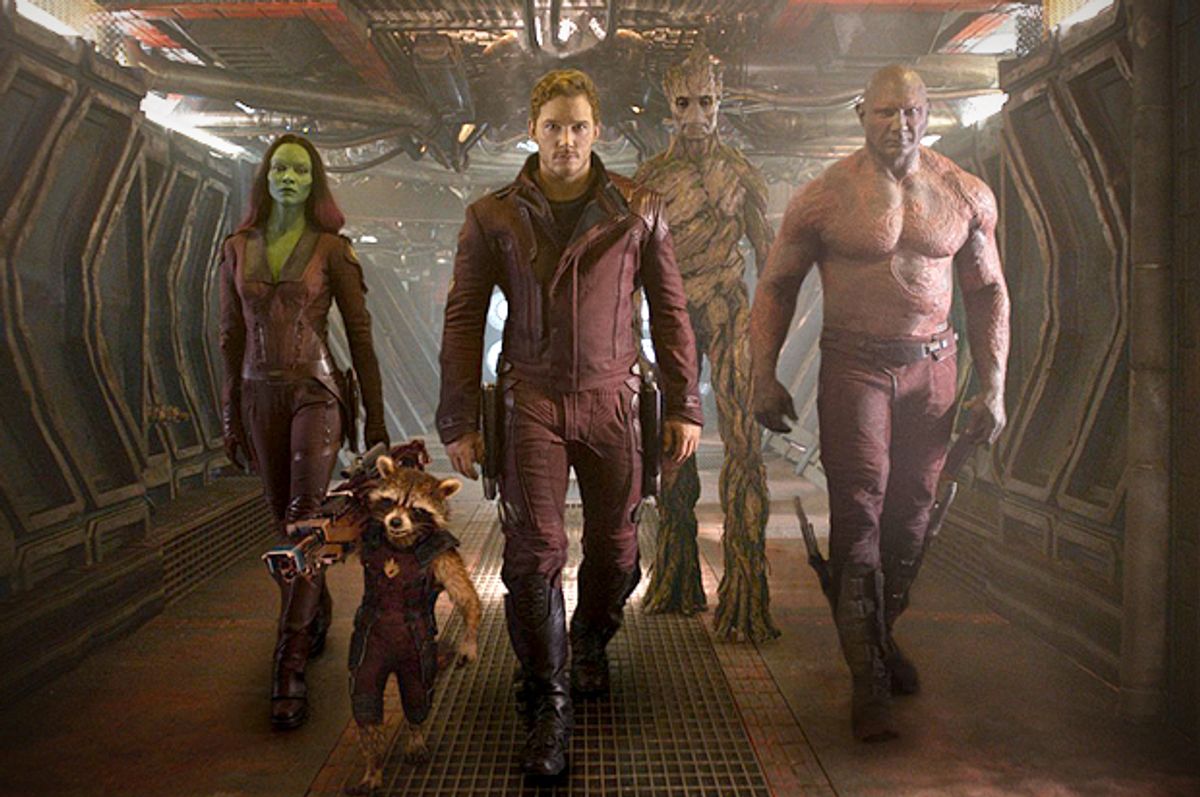 The best character in "Guardians of the Galaxy" is a walking CGI tree by the name of Groot. He’s tall with large, mournful brown eyes and a body made of regenerating twigs—a huggable look, though in practice he would probably be a little pokey. Much like Vin Diesel, the actor who plays him, he’s not the world’s most inspired conversationalist. His vocabulary is limited to “I am Groot.” But imbued with triumphant, thoughtful or furious inflections, the phrase turns out to be surprisingly versatile. For more nuanced thoughts, his best friend and business partner—a verbose genetically modified raccoon—is usually on hand to interpret.

For all these reasons, Groot is easy to love. The filmmakers seem to have recognized his broad appeal, positioning him as the comic relief as well as the character who provides his team of ragtag superheroes with rare moments of wonder. Ultimately, he even saves their lives by laying down his own. Through Groot, "Guardians" captures Americans’ troubled relationship with the environment. We love the way nature makes us feel, but we also expect to take from it without worrying about the consequences.

Beauty isn’t a matter of much general concern in "Guardians." The spaceships are bulky, the fashions functional, the galactic landscapes mostly industrialized. But thanks to Groot, the characters occasionally experience a sense of awe. Twice, Groot bristles his branches and produces a cloud of tiny, light-filled spores that envelope his friends. It’s the kind of twinkly, hipster-wedding atmosphere that would launch a thousand Pinterest pages.  Groot’s generally quick-witted companions are struck silent by the gesture, jolted out of their schemes by scenery that’s unexpectedly lovely and larger than themselves.

Groot doesn’t just give "Guardians" a dose of the sublime; he’s also the group’s most faithful protector. Early in the film, as the team breaks out of prison, he extends his limbs like Stretch Armstrong to smack a half-dozen guards against the wall, rendering them unconscious. Groot loses his branches while defending his friends in a different battle, but Rocket the raccoon has little sympathy, snapping at him that they’ll grow back. Rocket’s knowledge of Groot’s resilience makes him dismissive of his partner’s sacrifice. Of course a couple of self-restoring branches are a fair trade for the good of the group.

The scene is light-hearted, but it still made me wince in recognition. The self-interested logic that Rocket uses to write off Groot’s lost limbs is the same sort that I employ to justify the environmental damage caused by frequent plane trips or ordering take-out. I think about trade-offs; I minimize the costs of my choices so that I can continue to prioritize my own convenience.

"Guardians" attempts to bridge the cognitive dissonance of loving nature without caring for it by making Groot practically invulnerable. The characters can therefore shrug off his pain and accept the beauty and safety he provides, assured that there will always be more where that came from.

(It’s worth noting that while Rocket is himself a woodland creature, the film takes pains to distance the character from any innate raccoon traits. No rummaging through garbage cans for this guy! His snarky quips barely disguises a sense of alienation from his furry body; other people think he’s a freak, and Rocket’s absorbed their opinions. While Groot is also genetically altered, he’s in touch with his plant roots. Rocket is far more human: like us, he’s dissociated from his own animality.)

If the guardians take Groot’s heroics for granted, the film’s climax seems prepared to disrupt their blithe attitude. As their broken spaceship hurtles toward the planet Xandar, Groot wraps his fellow superheroes in a giant tree-hug, attempting to shield them from impact. “You’ll die!” Rocket protests, real fear in his voice now. But Groot is resolved. “We are Groot,” he says, his eyes welled with feeling.

In some ways, it’s a touching moment. For the first time, the characters and audience confront the idea that Groot is not a wholly renewable resource. But the scene also reflects Americans’ impossibly high expectations about what nature can and should do for us. Given what we already know of Groot’s gentle spirit, his decision appears inevitable. Of course he’s willing to be smashed to splinters if it means saving his pals.

And as it turns out, Groot’s pretty renewable after all. While Rocket mourns over the scattered remnants of his friend, Guardians isn’t willing to deal with the emotional wreckage of the big guy’s sacrifice. By the end of the film, a tiny new Groot is already sprouting in a pot that Rocket clutches as the team blasts off for new adventures.

It’s a definite relief to see Groot alive and well—I’m not made of moon rock! But the twist allows "Guardians" to evade any kind of reckoning with its own short-sighted environmental politics. If Groot can give and give and then grow right back, there’s no need to worry about asking too much from him. This depiction of Groot’s generosity is manifestly self-serving. Humans already put ourselves before nature; now we have a film that suggests nature would put us first too.

That’s a comforting thought, but not a credible one. "Guardians" seems to want to pull off a version of Groot’s floating light trick, which he produces for a second time as the spaceship plunges toward Xandar. Creating something pretty is a way to comfort his scared pals and distract them from the reality of his impending demise. Huddled together amidst the Groot’s curling leaves and softly glowing spores, the characters look like they’re in an enchanted forest—not preparing for a crash landing.

Sarah Todd is a writer and editor at Girls Like Giants.