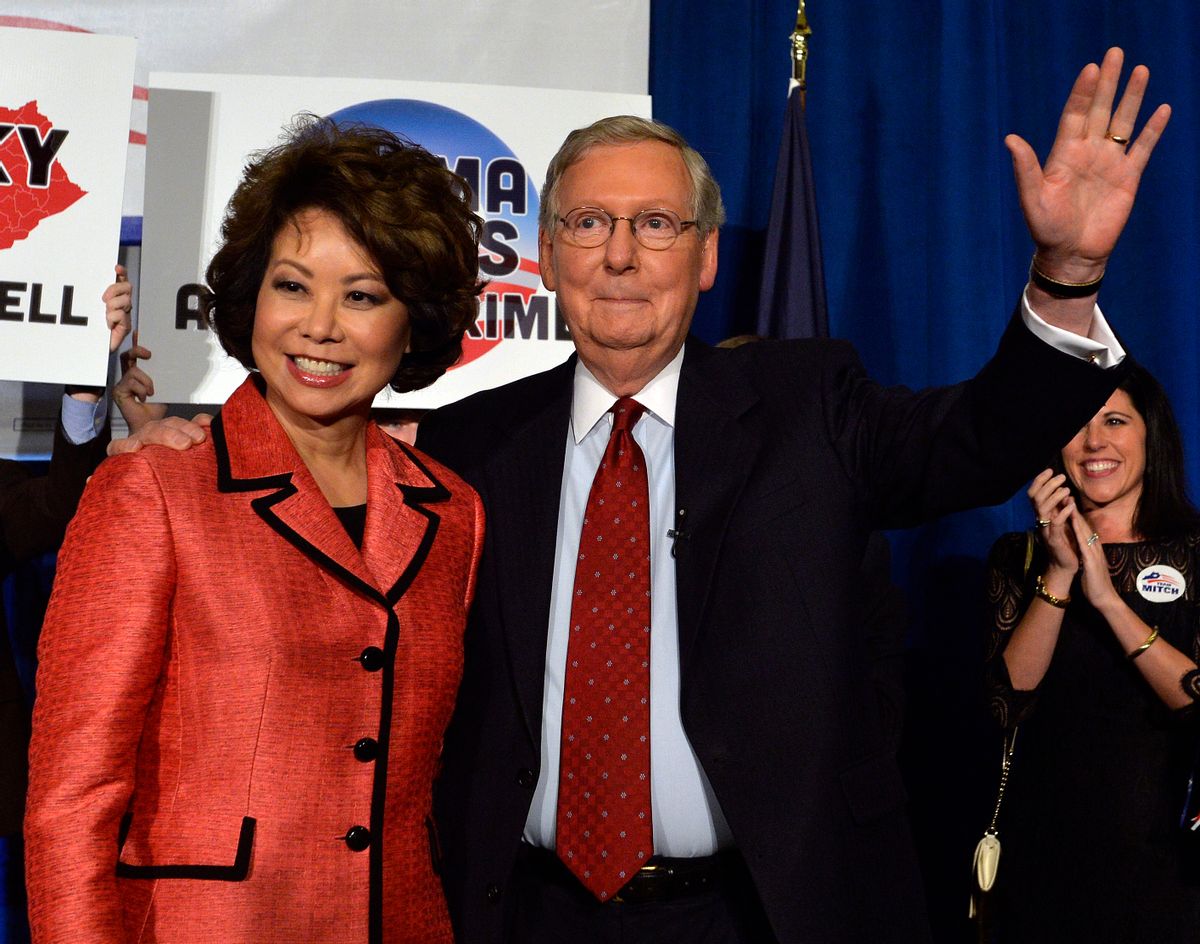 Kentucky Senator Mitch McConnell, right, and his wife Elaine Chao wave to his supporters following his victory in the republican primary Tuesday, May 20, 2014, at the Mariott Louisville East in Louisville, Ky. (AP Photo/Timothy D. Easley) (AP)
--

Republican Sen. Mitch McConnell, overly-enthusiastic detractor of Obama's 'war on coal,' seems to be waging that same war in his own bedroom. It turns out that McConnell's wife, former Secretary of Labor Elaine Chao sits on the board of Bloomberg Philanthropies, an organization working to kill the coal industry.

In 2011, Bloomberg Philanthropies teamed up with the Sierra Club to target coal plants for closure in an effort to "end our nation's reliance on dirty coal, plant-by-plant, community-by-community, and state-by-state," according to Bloomberg Philanthropies' website...The Bloomberg Philanthropies-funded campaign has a stated goal of “retir[ing] a third of the nation’s 500 coal plants by 2020, replacing the majority of retired coal plants, and keep[ing] coal in the ground in Appalachia.” The organization boasts that it has “prevented 150 coal plants from being built,” and has taken direct action against 16 plants in McConnell’s homestate of Kentucky, arguing that coal production is a health hazard and is harmful to the environment. The website takes credit for retiring 172 “dirty power plants” with “351 to go.”

Chao joined Bloomberg Philanthropies in April 2012 and earned $9,400 for her work that year. She also sits on the Board of Directors at Wells Fargo, which announced its intention to divest from Appalachian coal mining because of environmental concerns. Additionally, the company announced that it would cease lending to coal companies that participated in Mountain Top Removal.

Sen. McConnell has been aggressively campaigning throughout his home state Kentucky against the EPA's new carbon regulations which would shutter a number of the state's coal plants. He has also been outspoken in his disapproval of his opponent Alison Lundergan Grimes for her perceived support of the EPA's ban. "People are against the Kentucky way of life and need to be sent a strong message by the voters in November," he said on the campaign trail. "They question our values. They question our work habits. These people are not the kind of people we have here in Kentucky."

Sen. McConnell recently aired the following ad, promising to save the jobs of thousands of coal miners from destructive EPA restrictions:

But the senator's record on these issues is less than impressive. Last year, 12,342 people worked in Kentucky coal mines, compared with the over 40,000 employed in the early 1980s. Grimes' campaign manager, Jonathan Hurst said of the incumbent: "No matter how many ads Mitch McConnell runs, he can't hide from the fact that he has failed to save a single coal job in his 30 years in Washington."