The GOP's dangerous new BFF: What the Republican love affair with Uber is really about

Republicans and "sharing" don't often go well together. So what explains their allegiance to the sharing economy? 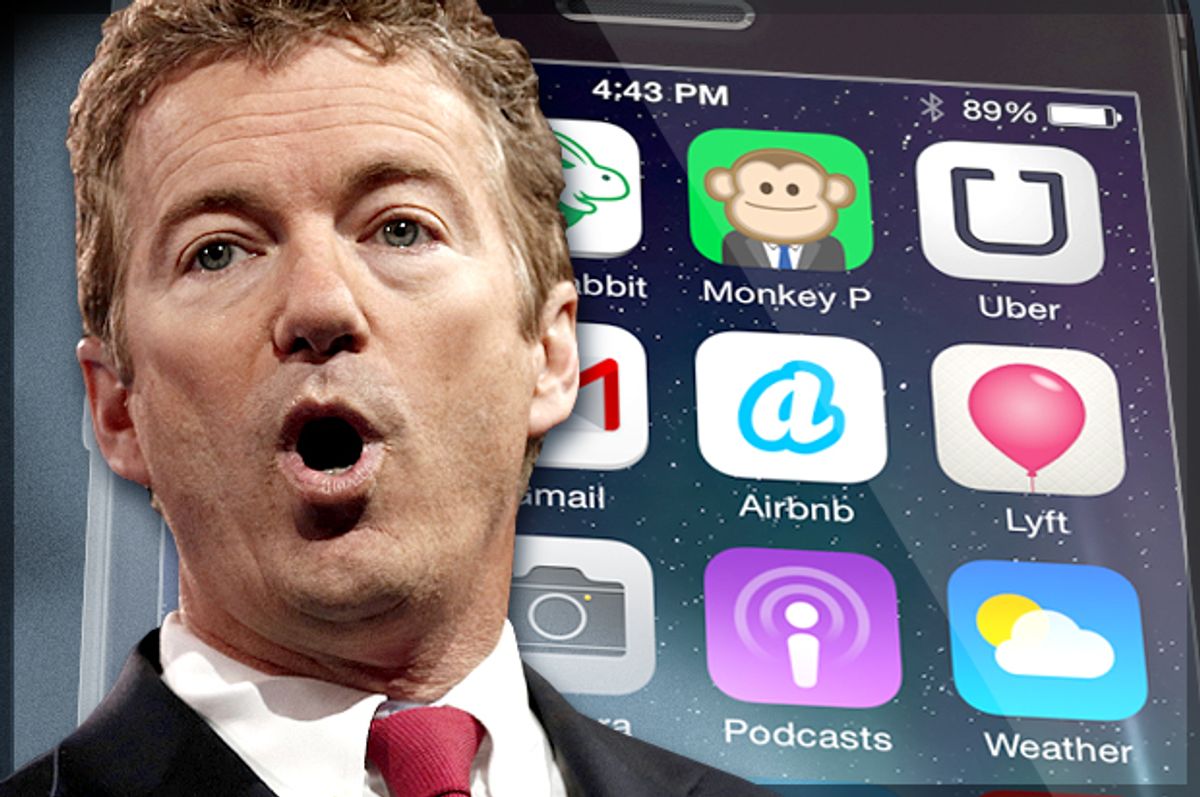 An important message from the GOP:

... Across the country, taxi unions and liberal government bureaucrats are setting up roadblocks, issuing strangling regulations and implementing unnecessary red tape to block Uber from doing business in their cities.

Yes, a funny thing happened on the way to the sharing economy: Republicans have suddenly jumped on the bandwagon, falling over themselves to embrace the new innovations pouring out of Silicon Valley.

Why is this funny? Because the sharing economy is sold by both its most sincere evangelists and the money-men looking for a big payday as a better, more enlightened, more progressive way to live on this planet. So there's a bit of a cognitive disjunction here: The rhetoric deployed to promote the likes of Airbnb, Uber and Lyft to the millennial masses looks awfully odd coming from Republican Party mouthpieces.

Let's start with the obvious: Just as your first toke on a joint leads inevitably to a life wasted fighting for dirty needles to feed your heroin addiction, everyone knows that "sharing" is a gateway drug to full-throated Communism. The exhortation "from each according to their abilities, to each according to their needs" might as well be carved on the door of every Airbnb host. Seriously, if Lenin had had access to today's smartphone platforms, he never would have been forced to junk "war communism" for the capitalist sell-out New Economic Plan. The sharing economy enables making the best collective use of our resources. Republicans need to do a little more thinking about what the consequences of the "end of ownership" truly entail.

But there's more. The sharing economy is also routinely marketed as an environmentally positive force -- to the point where mass adoption might even help us combat climate change. Ride-sharers don't need to buy their own cars! And if we consume less, and travel more efficiently, we'll burn less fossil fuel. For young people anxious about a future on an overpopulated and overheated planet that's running out water, the notion that when you click your way to a ride on Lyft you're helping to save the world is inherently seductive.

But of course, Republicans don't believe in climate change, increasingly resist any kind of conservation, and believe fuel economy standards are anathema and that we'll never, ever run out of oil. To the contemporary Republican, anything sold as environmentally progressive is basically a a liberal plot to destroy big business.

There are even bastions of the sharing economy, such as Yerdle, that profess to believe that consumption itself is inherently bad. Ronald Reagan would not be amused.

So what's going on here?

Here's what I think. Republicans have recognized two important things. The first is that the "sharing" economy is not actually about sharing. It's about finding new ways to separate people from their cash. Republicans have always supported and applauded such behavior.

But more importantly, Republicans have adroitly recognized that the clash between the sharing-economy upstarts and existing regulatory regimes fits neatly into classic conservative anti-government ideology.

As much is demonstrated by RNC chairman Reince Priebus in a recent op-ed in the Chicago Tribune:

[A]cross the country Uber has been targeted by state legislatures and city councils that have written regulations with the sole purpose of preventing Uber from doing business. In some places, the company has had to navigate outdated regulations and red tape that serve no discernible public interest, just special interests.

When legislators over-regulate, it's consumers who pay the price. In some cases, they pay more for goods and services because the government increases the cost of doing business.

Uber has thrived, in part because the public has spoken out in support of it. But why should any company have to fight the government tooth-and-nail just to be given a chance to compete?

Suddenly, Republicans have figured out how to be on a side of the culture war that doesn't automatically alienate young people.

Think about it. It's pretty well established that millennials are turned off by Republican stances on social issues like gay marriage. They're wary of Republican support for the wealthy and in an increasingly diverse society, suspicious of the lily-white polarization of the modern GOP. But gosh, do they love their smartphone apps!

By painting liberals as the enemy of new innovation, Republicans think that they have a way to win back the youth vote — and perhaps Silicon Valley (and all its money) along with it. It's brilliant.