Jane Austen meets mansplaining: This is the perfect satire of the anti-feminism movement 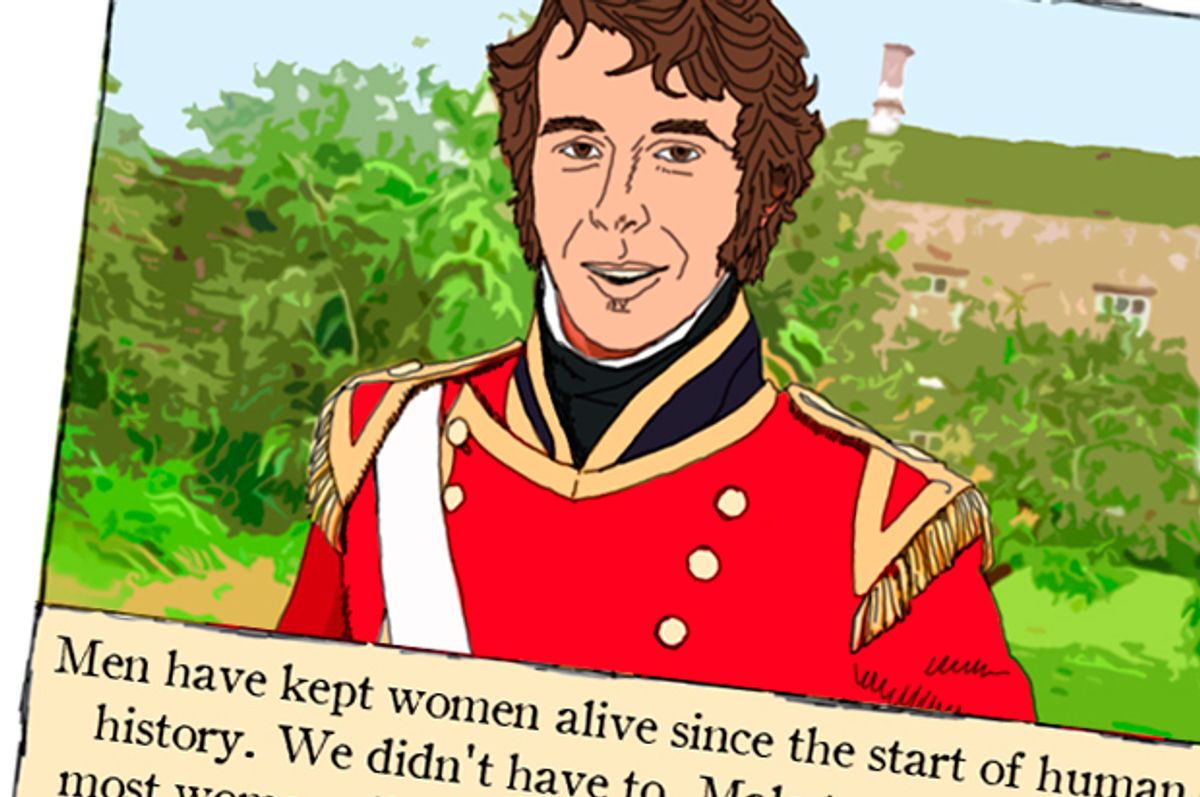 Over the years Jane Austen characters have been reimagined as vampires, zombies, rom-com stars and more, but now they’ve been reincarnated as something entirely new: dopey Internet mansplainers. The new Web comic "Manfeels Park," created by two women in Scotland, was born as a silly play on words but has rapidly become one of Web culture’s favorite children, making the rounds on both feminist and literary Twitter. The brainchild of creators Erin and Morag, 31 and 32, of Dundee, Scotland, "Manfeels Park’s" formula is simple: juxtapose the near-verbatim arguments of anti-feminist, mansplaining and misogynist Internet commenters with hand-drawn images of scenes from the most beloved Austen adaptation of them all, the 1995 BBC "Pride and Prejudice." And then let the readers infer what they will.

Take, for instance, the most recent comic, in which the bumbling, absurd clergyman Mr. Collins opines at the dinner table while Lizzy Bennet has to hide her giggles behind a napkin. In the scene as imagined by Austen and enacted by the BBC, Collins was talking about his calculated plans for marriage and social climbing. Here, his words are those of commenters on a Facebook thread about ordaining women in the Mormon church, so he’s saying things like “It isn’t fair that women are the only ones who can have children” and so forth, a popular MRA and anti-feminist argument. Meanwhile: snorts and skeptical looks from Lizzy and her father.

The question, of course, remains: Was the home-bound novelist a before-her-time feminist, or was she actually a social conservative? Critics and scholars will be arguing this point until the very last day of Austen’s popularity (which means until the end of recorded time). But in the interim, those of us who relished both the rebirth of Austen mania in the mid-1990s and the dawn of Internet feminism soon thereafter can go right ahead and claim Austen’s words and characters to mock misogyny, because they’re perfectly suited to the cause. Austen may not have been overtly political, but she did delight in the ridiculous -- the ridiculous as experienced by young women in a male world. And today's incarnations of feminism offers us plenty to ridicule, making Austen’s work and the cultural empire it has since spawned the ideal poker to singe irony-laced holes into the fabric of the patriarchy. “Austen definitely had something to say about the place of women in society,” Morag told me in a recent interview. “Her books vary in how overt that is, but she was pretty switched on.”

Many of the scenes in "Manfeels Park" feature the skeptical Lizzy Bennet, played in the original film by Jennifer Ehle, reacting to the men around her. “Jennifer Ehle gives good eye roll,” says Morag. Reading the installments makes you realize how much of Austen’s social interactions have a gendered undertone and how much of Lizzy’s beloved wit, archness and irony is a weapon she uses to fight her own relative disempowerment. Not unlike a feminist blogger in the vast patriarchal sea of the Web, really. While the creators had initially planned a more elaborate spoof, “we ended up enjoying the juxtaposition of these gents with modern dudebro commentary.” And by avoiding further editorializing themselves, they let the Austen scenes do the work for them, with every Lizzy reaction shot revealing, with her frustration or amusement or pique, the silliness of the objections to feminism encountered on the Web.

Erin and Morag began the "Manfeels Park" Web comic based only on the sound of the word.  “We were talking about some feminist issue or other,” explains Mo, “and I said something sarcastic about 'manfeels' and Erin observed that whenever someone used that term she thought 'Manfeels Park'. And I said, ‘Yep, I'm using that for something if it kills me.’" They chose to work with the 1995 "Pride and Prejudice" because they happened to have screen caps lying around. But the movie’s iconic status means that it’s an ideal starting point, since most readers will have seen the scenes in question and can hear the voices and imagine the mannerisms of the characters. Of course, early on, they had to include the now-infamous film addendum to the book in which Colin Firth as Mr. Darcy dives into the lake to deal with his, erm, male feelings. Now, turned into a misogynist temper tantrum, it has become one of "Manfeels Park’s" most popular installments.

In seeking quotes to use as material, Erin and Morag have been careful to stay away from the most extreme sexist hidey-holes on the Web. “We don't generally dip into the places known for the worst commentary like YouTube or MRA forums,” says Erin, who does a lot of the quote hunting. “We want the stuff we feature to be pretty 'mainstream' reactions to discussions of feminism.” But Facebook, Twitter and now submissions from readers provide plenty of fodder. They’ve also been able to jump on trends both within the movement and reacting to feminism. Recently, they took on TERF (trans-exclusive radical feminist) by putting a TERF Facebook critique of their very own Web comic, “'Cis' is a made-up word,” into the mouth of Austen’s notoriously snotty -- and much older -- Lady Catherine De Bourgh. And when “women against feminism” made its appearance, “Austen Characters Against Feminism” offered a rejoinder, remixing quotes from "Pride and Prejudice" about gender to great effect. “I don’t need feminism because a man looks nothing without regimentals,” says the notoriously boy-crazy Lydia Bennet. We know how that philosophy worked out for poor Lydia: Her position on the good looks of soldiers could have used a good feminist antidote.

The success of that project offers a glimpse into the future of "Manfeels Park." “Now that things are rolling,” says Morag, “We’re thinking of getting more topical and actually pulling commentary together on the Feminist Issues of the Day.” The easiest place to start? Their very own commenters and trolls, including a Reddit thread devoted to dissecting, and misunderstanding, the site. After all, Jane Austen knew a thing or two about misunderstanding.