We watched so you don't have to 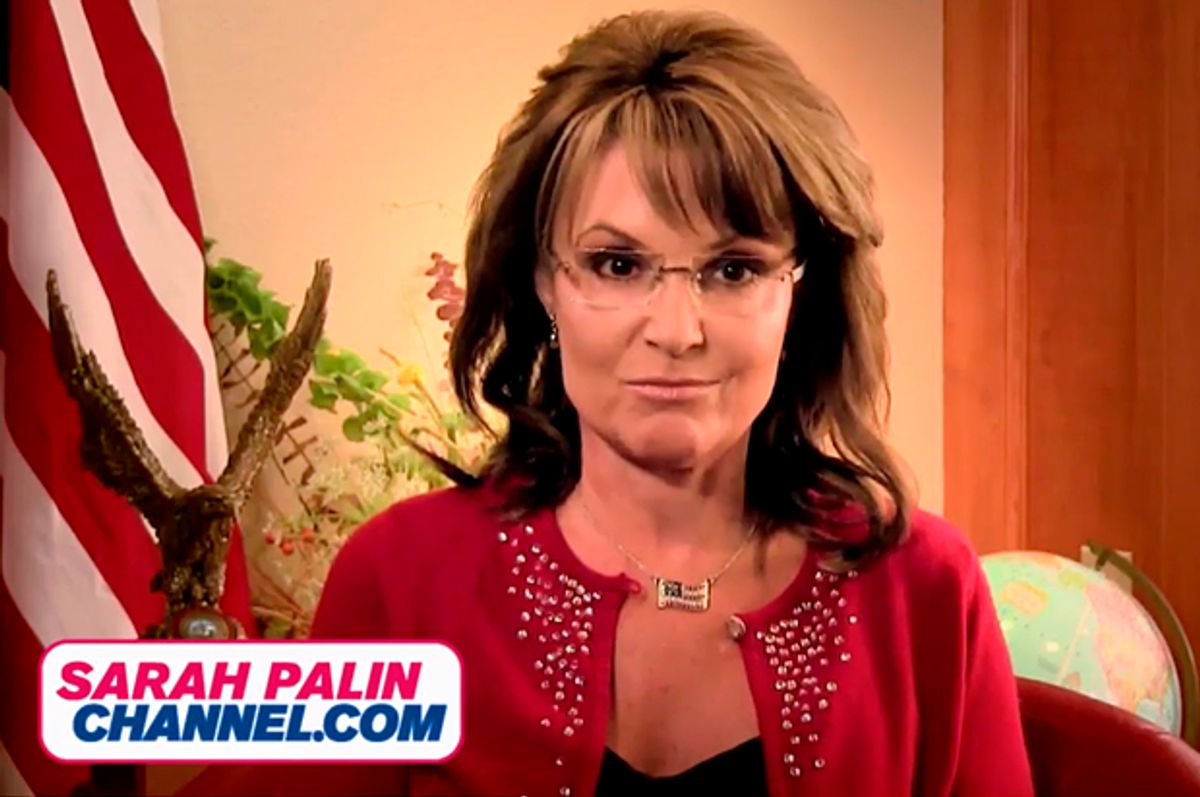 You may have heard that Sarah Palin started her own member-supported Internet TV Channel recently. It's part of the TAPP Network, digital channels run by former TV execs, and really more of a website with videos and blogs and pretty low production values. But glory hallelujah! Free-wheeling Palin wanted to get around all that “politically correct stuff” in the mainstream media and just talk to real Americans about real issues, from her heart, or whatever passes for it. Subscribers can join her conversation for a mere $99.95 a year, though given her past record, there’s no guarantee she’ll stick with it for a whole year. Caveat emptor.

We recently took a look at what’s going on at SarahPalinTV, so you don’t have to. (You’re welcome.) Sadly, it seems that Palin has not taken any of the Twitter suggestions generously offered up for programming on her channel, suggestions like “Death Panels, She Wrote.” Sarah Palin TV runs with more of an "Impeach Obama Around the Clock" kind of theme, along with some of Palin's homespun homilies. Here are some of the more ridiculous morsels of content streamed on the site.

On the front page of SarahPalinTV, viewers are greeted with a countdown clock for Obama’s presidency. Palin measures it in days, hours, minutes and seconds, so Obama-haters get the satisfaction of watching the number of seconds go down — in real time! This is extra ironic, since Palin is also obsessed with impeaching Obama. In fact, she has a video on the channel all about the "I Word" (but more on that later). But that countdown clock would suggest that even Palin doesn’t believe her own claptrap about Obama’s impeachability.

Next to “Days Left in the Obama Presidency” is another kind of clock: “Our National Debt.” Reminiscent of the late right-wing libertarian real estate developer Seymour Durst’s debt clock in Times Square, this also has some really big numbers on it. Those numbers are constantly moving. Mostly they go up according to some unknown algorithm that likely has no connection to reality and makes it seem really, really scary. Deficit hawks like Palin love that.

Why is there a word of the day on the Sarah Palin Channel? No idea. Perhaps it's due to her own documented history of difficulties with the English language. On the day we looked at the site, the word of the day was “Mellifluous.” Isn’t that a pretty word?

Laughable that Palin thinks she can go toe-to-toe intellectually with Warren, but some low-lights in this video, which shows grainy footage of Warren's speech intercut with Palin's commentary, are lower than others. When Warren states, “We believe in science, and that we have a responsibility to protect the earth,” Palin responds: “We believe in science and God’s magnificent creation overflowing with resources.” Never mind that believing both is technically impossible. She goes on to say that God wants us to honor him and develop those resources, and exploit them. And use them to heat up the planet. She’s obviously tight with God.

Another bizarre moment is when Warren asserts the progressive tenet that fast-food workers deserve to make a living wage. Palin goes on a hilarious tangent about how she thought progressive lefties think that “fast food is of the devil” and “shouldn’t fast-food workers should go to purgatory and all go vegan or something.” Oh, hahaha. “And wages and picket lines don’t get discussed much in purgatory.” She's good. Wonder if she's ever tried stand-up.

As for Warren’s assertion that women have a right to their own bodies, Palin’s response is that “babies have a right to their own bodies nestled in their mother’s wombs.” And if you want contraception, says Palin, “more power to you” (you trollop), and you can just go pay for that yourself, rather than violate some corporation’s religious rights which are, after all, enshrined in the Constitution.

5. But Back to That Impeachment Thing

Palin is, of course, obsessed with the utterly hopeless idea of impeaching this “lawless,” “imperial president” named Obama, and she boldly says so in her catchily named video: We Can’t Be Afraid of the Scary "I-Word." By her count, Obama has “25 impeachable offenses,” but the last straw is this “deliberate border crisis” he has caused. “It’s enough to make a battered wife say, no mas,” she says demonstrating her command of Español , and her sympathy with the hard-working Americans and the legal immigrants. “If Obama is not impeachable, who is?” she wonders. Should be a slam dunk. And in Palin’s little echo chamber world it might be. But, you know, just in case it doesn't work out, she has that Obama administration countdown clock running.

Who doesn’t want to hear more from Bristol Palin? On the day we checked this ongoing piece of content, Bristol had an oh-so-clever cartoon up comparing “botched executions” with abortions. Nope, the apple does not fall far from the tree. Mother and daughter share terrific senses of humor.

7. Palin has not ruled out running for president.

Fans are always asking Palin questions on her Facebook page, so on the Sarah Palin channel, there's a video of Sarah looking at the camera, and just talking, just answering those questions. One of the questions she gets all the time, like constantly, is when is she going to run for president. Palin replies she does not like to close any doors, although she does not have any plans to run in 2016 as of yet. She's confident that there will be a deep bench of "common-sense conservatives" running. But she hasn't closed any doors. Yikes.

8. Motto: Sarah Palin’s Channel is all about you!

This might come as a surprise given the amount of blathering Sarah Palin does about Sarah Palin on her channel. (There’s a long tangent about how much she likes to go fly-fishing for you outdoorsy types on that Q&A part.) But really, it’s all about you. And Sarah. And what you think of Sarah. But you.