What was Tony Stewart thinking?

Investigators say there's no evidence of criminal intent, but the heat of competition can be deadly 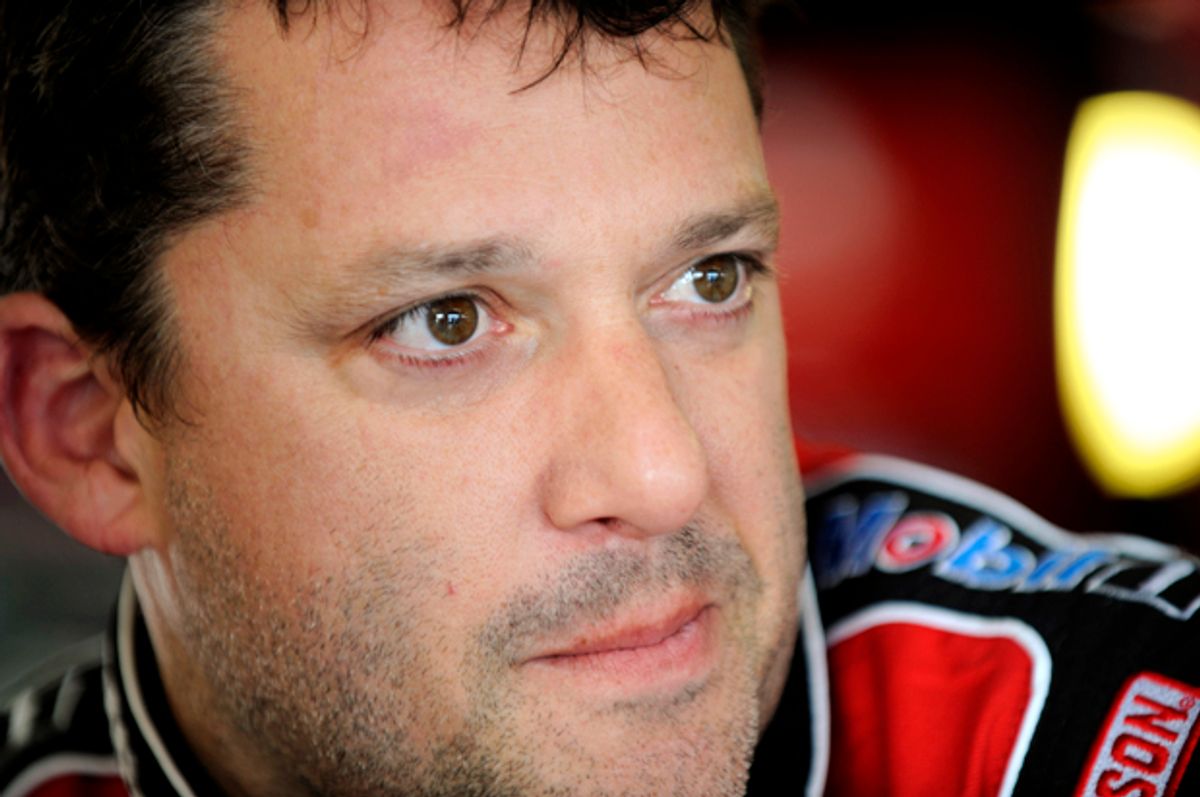 Maybe the thing that's astonishing about the death of Kevin Ward Jr. this weekend isn't that it happened. It's that it doesn’t happen more often.

On Saturday evening, three-time NASCAR champion Tony Stewart was competing in a dirt-track sprint car event in upstate New York. Reporters describe a confrontation in which the 20-year-old Ward, whose vehicle had been hit and "sent spinning" into the wall by Stewart, got out and angrily stood on the track, pointing accusingly at Stewart. As the scene appears on the video footage that has now been viewed and scrutinized over a million times in just the past few days, what happened next was an arresting and chilling sight. There was Ward, defiant and angry as vehicles continued to whip by him. And then there was Stewart's car, making what appears to be a small swerve to Ward, striking him and then dragging him. There was Ward's body on the track, motionless. Ward was declared dead at a local hospital shortly after.

Ontario County Sheriff Philip Povero quickly announced at a news conference that there are "no criminal charges pending at this time," adding, "We have reviewed the investigation to this point with the Ontario County district attorney. At this very moment, there are no facts in hand that would substantiate or support a criminal charge, or indicate criminal intent on the part of any individual." Investigators noted the "slick and muddy" track surface, as well as Ward's dark suit and the "dimly lit part of the track" where the fatality occurred. But Tyler Graves, an eyewitness described as a "sprint-car racer and friend of Ward's," told the Sporting News Saturday that "Kevin got out of his car … He was throwing his arms up all over the place at Tony for most of the corner. I know Tony could see him. I know how you can see out of these cars. When Tony got close to him, he hit the throttle. When you hit a throttle on a sprint car, the car sets sideways. It set sideways, the right rear tire hit Kevin, Kevin was sucked underneath and was stuck under it for a second or two and then it threw him about 50 yards." And Rich Willis, whose sister viewed the event from Turn 1, said she described it similarly. "He approached him and evidently when he was driving by the guy standing on the track gesturing at him, he gunned his engine. What happened was the back end kicked out and clipped the guy and the guy flew across the track."

This weekend, Stewart pulled out of another event and issued a statement that said, "There aren't words to describe the sadness I feel about the accident. It’s a very emotional time for all involved, and it is the reason I’ve decided not to participate in today’s race at Watkins Glen. My thoughts and prayers are with his family, friends and everyone affected by this tragedy." He calls what happened an accident, and as of now law enforcement agrees. But in the heat of a moment, intention and action can get muddy. The 43-year-old Stewart has been described as "NASCAR's resident hothead," a combination of "talent and a nasty temper." The New York Times notes that "Stewart has gotten out of his crashed racecars and has wagged his finger at other drivers, warning them that a flogging could come for causing him to wreck. Verbal and physical altercations also have unfolded in the garages or on pit road," and there was a notorious 2012 incident in which Stewart left his vehicle during a race and threw his helmet at another driver's windshield. A full 12 years ago, Sports Illustrated said of Stewart, "He can also be broody and hotheaded, they'll say. He runs a little tight, like a car that won't turn and wants to run into the wall. He is, in other words, flawed and fully human." And it noted that "The very things that make a good driver -- the necessary sense of infallibility, the aggression, the lightning reactions, the boundless, bulletproof arrogance and the bone-deep unwillingness to concede an inch, even conversationally -- worked against him," and described a physical confrontation with a photographer that led Stewart into anger management.

If you have ever been behind the wheel of a car, you've likely had at least a moment in which you've felt frustration at another driver or pedestrian -- which is a powerful force when you're inside a big metal box. If you have ever competed in anything, even as a casual amateur goofing with your buds, you likely know the intense rush of adrenaline that a contest can bring. If you want to compete professionally, you have to have a fair amount of that sense of infallibility and aggression that both have served and hindered Stewart throughout his career. And that's how, on a Saturday night in August, you might find yourself driving on a track in which another man, fueled by anger and indignation, is standing and pointing at you – just as you yourself have done to others in the past. It is not a scene of thoughtful contemplation on anybody's part. There's only the instinct to win, the fury to dominate. And that's as real as the "sadness" beyond words that can follow.

Stewart did not get in his car on Saturday with the intention of killing. He got in it, after a difficult previous season marred by accidents and injuries, looking for victory. And sometimes that passion leads to profound damage. "You never mean to do something like that," Tyler Graves says. "Kevin was pissed and he let Tony know. And Tony was trying to give the message back that he wasn't happy either. He went over the line with it."