An awareness-raising stunt goes viral, but it's hard to say whether it will change anything 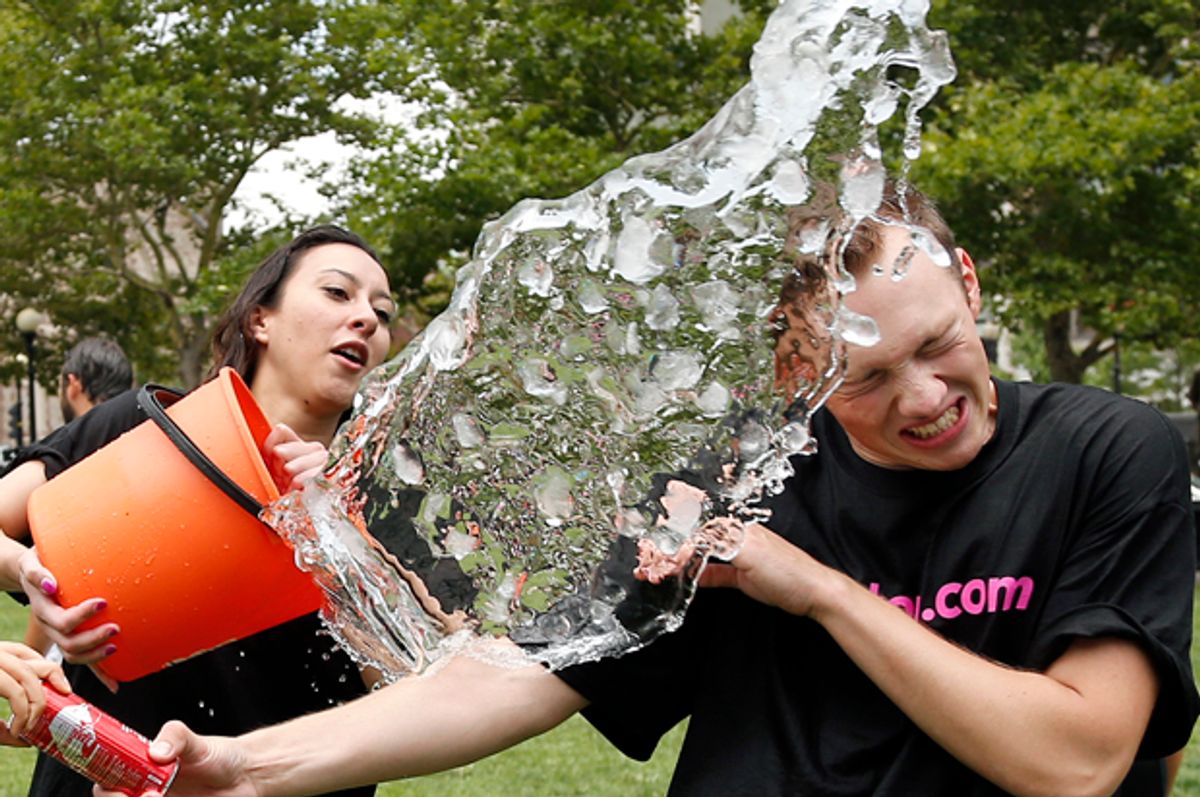 These are the facts: A bucket of ice will not cure a disease. Your momentary discomfort cannot be exchanged for the relief of someone else's pain. This is a fact, too: Ever since former Boston College baseball player Pete Frates first issued the challenge to friends to endure dumping buckets of ice on their heads, the ALS Association has seen a 1,000 percent spike in donations over this time last year. In case you've been off social media lately and somehow missed it in your feed – the challenge works when a person or group of people posts a video of themselves self-dousing with a bucket of ice, and  then naming other people to take up the gauntlet or donate to a challenged Barack Obama.

In seemingly helpless situations, doing something, even something that feels entirely unrelated to a real solution, often feels better than doing nothing. And if you want to get people involved in a cause, enticing them to do something that's lighthearted and playful and involves others is a much easier than sell than simply asking for their money. Everybody likes a tangible benefit, something that instills a sense of accomplishment, even if the accomplishment is a cold, wet shirt. But as a person with very mixed feelings about self-congratulatory "awareness" stunts, I've watched the #icebucketchallenge go viral lately and curmudgeonly wondered, like Slate's Will Oremus, why in so many cases "The charity part was an afterthought" and why people can't just help a cause "without the promise of receiving piles of Facebook likes in return."

But when I spoke recently with Stephen, a friend's brother-in-law who has ALS, he had a different take. As he says, the disease associated with a long-ago ball player "is still uniformly fatal and affects just as many people as it did 75 years ago. So anything that shines a light on what people currently living with the disease and their loved ones are going through is a positive." He admits that, "Sure, in some of the videos it isn’t clear whether or not people truly get it or just want to see themselves on Facebook" but that getting involved in the challenge can encourage someone to learn more, and as he says, "It only takes a second for the reality of ALS to hit you when you see Pete Frates."

Do we need goofy stunts to get people to care about serious, debilitating diseases? Apparently we do. But there's a difference between raising awareness and actually accomplishing things. And it's worth asking what happens when a cute summer trick is not so appealing in a few chilly weeks. For now, however, there's momentum and behind that momentum there's real and very badly needed money. And there's something else too. There's the message to people with ALS that they are recognized and they are valued and they are not forgotten. Stephen says, "Seeing the outpouring of support for other people living with ALS through a silly thing like the ice bucket challenge gives me hope that the ALS community will receive the resources it needs to find a treatment or a cure as quickly as possible. I have been humbled by the support my family has received from our friends. With something like this, you see how many people are supporting other families facing this disease. You realize that the tent is growing." And he adds, "If pouring ice water on your head and making a silly video on Facebook brings more people into that fight, then we as a community win."