"He was this sort of electric, shining piece of humanity," Maron says, remembering a king of comedy 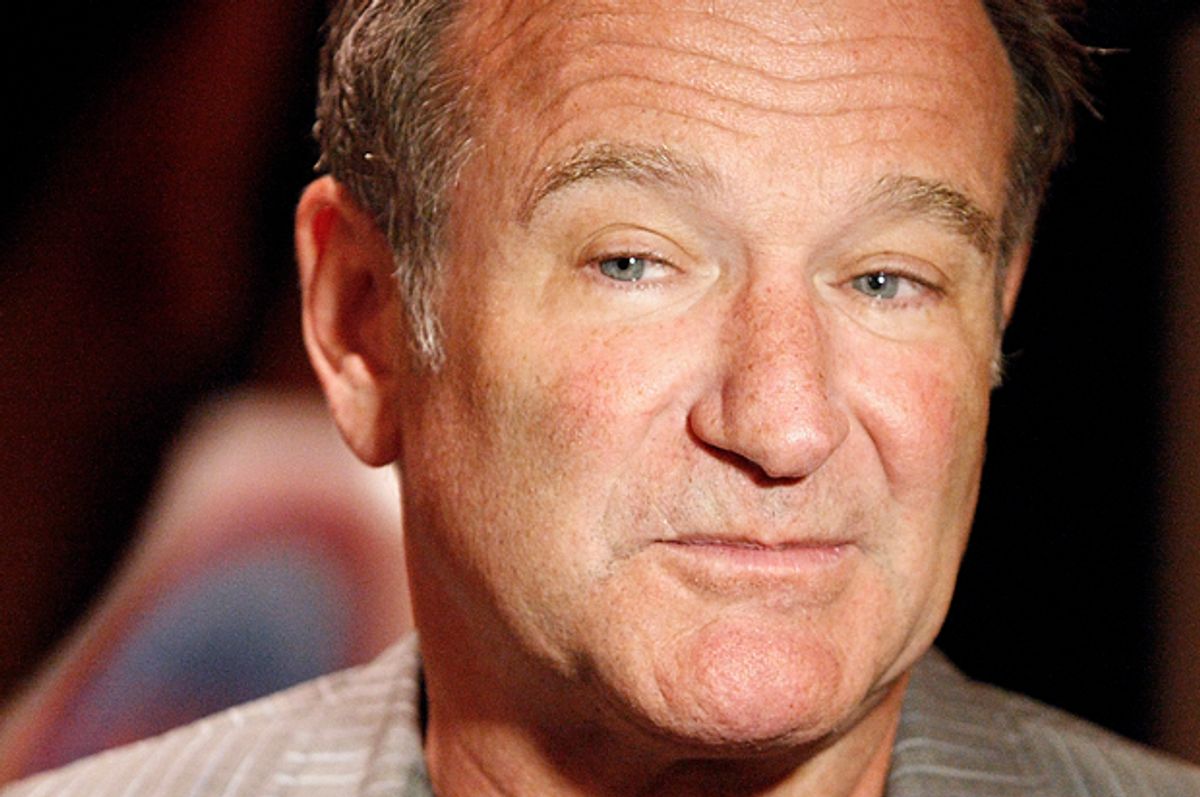 Though he'd talked about some of his alcohol and drug abuse issues in public before, it was on an episode of Marc Maron's "WTF Podcast" in 2010 where Robin Williams, the intensely funny but deeply troubled comic who died of an apparent suicide on Monday, bared his soul and truly opened up about depression, addiction and divorce. As Maron's 67th guest, Williams helped to establish the podcast as a safe, understanding space where comedians could shed their public personas to talk about their inner demons and personal struggles.

Today, in honor of Williams, Maron has reissued the special episode with an introduction that remembers Williams and the conversation that changed Maron's life. Maron, though clearly shaken and emotional, so wonderfully articulates the sense of loss the world feels right now. And, during a time when some ignorant commentators are criticizing the suicide as "cowardly," Maron's insight lends some much-neeeded humanity and compassion to a discussion about how all-consuming and unfair and terrifying depression can be. It's a must-read for anyone who loved Williams, loved his comedy, or loves someone with depression. Please give yourself a few minutes, though, because you might get emotional:

Depression is real. I don’t have any details. I don’t know what happened. I can’t make a comment. I was never in his inner circle. But I do feel the loss and I do know what depression is and I do know from talking to him personally that this was something he struggled with and having talked to many comedians and many artists is something a lot of people struggle with. Having a father that struggles with it, it’s a horrible thing.

But we have to remember that Robin Williams is really one of the greatest comedians, ever, ever, ever in the history of the world as far as I know it. Because he had all the things that were necessary to be a great comedic artist. He was sensitive, he was perceptive, he was empathetic. His mental agility was astounding. He was full of love. And he, by nature of putting all those out into the world, required that of us. And we felt it. And there was a humanity to Robin Williams. Robin Williams changed everything. There’s nobody that wasn’t touched by Robin Williams. He was the king. The spirit of pure comedy ran through this guy. He was unto himself. There was nobody else like this guy. Nobody else like him ever. And as a comic, despite what any other comics say and whatever your judgment of him as a comedian, he did it all. He did everything that all of us wanted to do and he did it brilliantly. There’s never been a comedic artist like this guy. And there’s no more painful realization than the other side of whatever comic genius is, is sometimes this. That with that sensitivity, with that perception, with that empathy, with that love, with that mental agility comes a heart too heavy to live, a heart that becomes so heavy that it chooses not to go on, for whatever reason. I don’t know his reasons. It’s horribly sad, and it’s a horrible illness — depression.

But on a personal level, when Robin Williams invited me to his home in 2010, that conversation is what defined the show from that point on, and what defined my life in a lot of ways. I had known him a little bit in passing and he was always — it was amazing about Robin Williams. He was this sort of electric, shining piece of humanity whose entire life onstage was to entertain thoroughly and with a type of presence that nobody has ever seen before. There’s nobody who wasn’t touched by it. And when you met him personally, he was almost shy. And he was very warm and very … you just felt like he really cared about how you were doing, what was going on with you. He was very sweet. But he was ready to talk. It seemed to be he was ready to talk for almost the first time in his life in a way that he never talked publicly before and I was happy to be there for it. I learned something. I learned something about him. I learned something about being there for other people. To sit there with this guy, this guy who was — his own momentum — to sit there with a guy who was known to not sit still, who was known to sort of depart on riffs that almost essentially enabled him to avoid himself in a lot of ways and to have him be as present as he was, it wasn’t daunting at all. It was an honor. It was my pleasure. And it was completely surprising and just full of humility and just … he was a person. With his own problems. That he carried with him. And I think part of his genius came from the struggle with those problems, obviously. And he was too young. It’s so sad.

The world is going to miss Robin Williams. The world is going to feel his absence, certainly right now, but moving forward as well. You’ll see. Just like how he stuck with you whenever he hit your brain and built a home in it you could always go back to, this loss will do the same thing. It’s a very sad day, but I’m happy I have the conversation to share with you. This is my talk with Robin Williams from April 2010.