Robin Williams' secret life as a video gamer: The online gaming community mourns one of its own

Like them, Williams was a video game obsessive for whom fantasy was a welcome retreat from the world 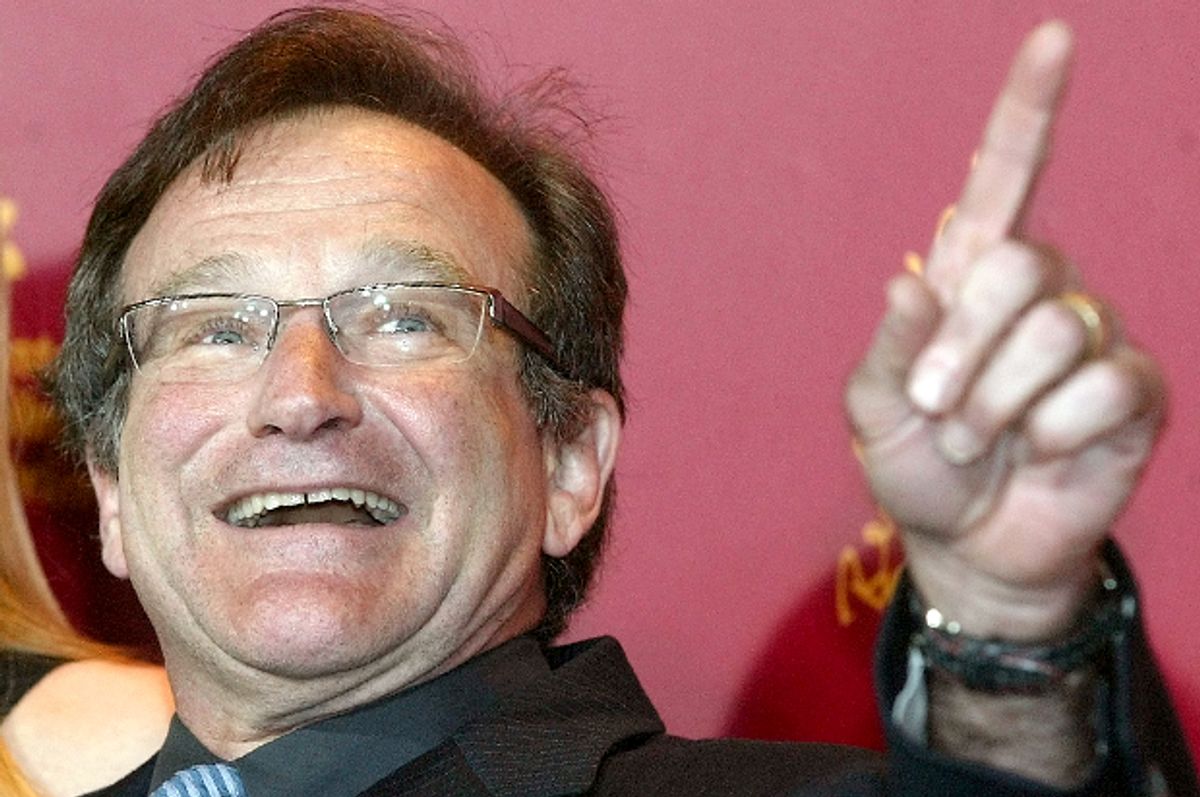 On the IGN Entertainment forums, in a raucous under-the-radar section of the site known colloquially as The Vesti, there’s a thread that was started on the morning of Friday, Aug. 8, by a user called DigInTheCrates. It’s titled, “Are people bracing themselves for the fact that Robin Williams will die soon?”

The heading is creepy, but the contents are sincere. DigInTheCrates, along with being an avid gamer, is a Williams superfan who had recently begun to fret about the state of Williams’ health. When another IGN user asked, “Are you going to kill him or something?” DigInTheCrates responded, “He’s old and his health is poor which is why I made this thread. no I don’t plan to kill him you sick weirdos, why would I kill someone I love.”

In retrospect, this bizarre thread looks like an eerie harbinger or an act of the Illuminati, but it’s not surprising that gamers were discussing Williams three and a half days before his death. The online gaming community adores Robin Williams. And not just because he’s funny and geeky-sharp — as are many of these forums’ users, who’ve mastered the rhetorical space between trolling and really good sarcasm. But also because he was, like them, a video game obsessive for whom virtual fantasy was a welcome retreat from the world.

“He was one of us,” wrote Ed130 The Vanguard last night on the forums for The Escapist, another gaming destination. Sure, much of the world remembers Williams for his rapid-fire stand-up and the way he whispered, “It’s not your fault,” to a weeping Matt Damon, but he was also a guy who was so enamored of video games that he named his daughter after “Legend of Zelda,” and named his son after Cody from “Final Fight,” and who talked at length about his favorite video games during a Reddit Ask Me Anything in 2013 (“I’m looking forward to the next Xbox. I can’t imagine the graphics being any better. It will be like these characters are living in your house”). He also appeared in the world’s most tear-inducing video game ad for Nintendo’s "Zelda," during which he told his daughter that she and the princess are “both pretty magical.”

To the gamers trading jokes and barbs on IGN.com and us.battle.net and mmo-champion.com, the gamers contributing to threads like “Are you buying Middle Earth: Shadow of Mordor?” and “if you are on this list you suck and are ignored,” Robin Williams was a dude who played the games they played and knew exactly why they played them.

At 4:03 p.m. on Monday, four hours and one minute after Williams was pronounced dead in his home, DigInTheCrate’s thread exploded. (OK, it “exploded” by IGN standards.) The thread swelled with mostly tongue-in-cheek accusations against DigInTheCrate and his preternatural timing:

“Yep op is possessed by Satan.”

“did anyone else think ‘I really hope RW didn’t find this thread, see we haven’t been entertained in well over 10 yrs and end it all’”

“OP is the angel of death”

“Don’t blame me,” DigInTheCrates responded. “I blame all you people for not loving and appreciating him enough while he was here.”

Robin Williams played “Portal,” and “World of Warcraft,” and “Call of Duty,” and was open about his addiction to them. “It’s like cyber-cocaine,” he told the Daily Telegraph in a 2011 interview. “Especially if you’re online playing against other people, it’s totally addictive, you get lost in the world.” And though he didn’t always play online — “because getting my ass kicked by an 11-year-old is very humbling,” as he said during his Reddit AMA — gamers harbored secret hopes of playing against him someday. “God I hope I end up playing a ‘Call of Duty’ match with you,” one user wrote, wistfully, during Williams’ Reddit AMA.

Now players might just stumble across Williams in a game after all. The idea to memorialize Robin Williams as a “World of Warcraft” Non-Player Character was born in a “World of Warcraft” forum on Monday night, and within hours, a Change.org petition had been created to do just that. The petition contextualizes Williams firmly within the gaming community, not as a celebrity, but as one of them: “It was reported that Robin used to play on the Mannoroth server, and was something of a troll in trade on good days or when anonymity allowed. … Because of his presence within our community, we the players of ‘World of Warcraft’ are asking Blizzard to kindly create an NPC within the game that memorializes the actor/comedian. Many have expressed a wish [that] this character perform some of Williams’ best jokes within the World’s End Tavern, so that he may continue making us smile long after his passing.”

The petition ballooned to almost 9,000 signatures by this morning, and rumors are swirling that the "WoW" powers-that-be have already approved the request. “Celestalon has seen the petition and has been quoted as saying ‘We’re taking care of it,’” wrote the petition organizer. (I reached out to Celestalon, a technical game designer, and while he expressed a great love of Williams, he was unable to comment on "WoW’s" future plans.) Even the gamers griping about the idea of Williams getting a minor role in “World of Warcraft” are doing so because he was just a “regular player,” which is a backward homage to the guy’s gaming authenticity.

Naturally, “Zelda” players want Williams for their own, and there’s already a thread on gamefaqs.com debating whether Nintendo should dedicate the next “Legend of Zelda” game to him. On an even sweeter note, some “Zelda” players might even be opening up their wallets with no hope of a dedicated game at the end of it all. As user Vulpes wrote on a Zeldauniverse.net forum, “Considering his connection to ‘Zelda,’ does anyone think the community sending his family some kind of organized condolences or something like that would be appropriate? We could raise money for his Windfall charity, maybe?”

Later, Vulpes told me, “The most impressive thing about Williams’ relationship with gaming was how shameless he was about it. These days, if a celebrity admits to playing games, it’s frequently treated as a dirty secret: 'I know it’s nerdy, but I play video games!' Williams loved video games, 'Zelda' in particular, and not only did he not care who knew, he acted like there was no reason to care who knew. He named his daughter after ‘Zelda’ like it was the most normal thing in the world.”

Most touching are the individual tributes from gamers, who seem to revere Williams as a fallen soldier. “I was playing a game vs. a mate when he came around and asked some Q’s about Eldar and I remember he liked my swooping hawks. Truly an awesome man, but if you know anything about him he had his daemons,” writes a Warhammer 40K player. “Dammit, he didn’t even get to experience the ‘Halo: Master Chief’ collection in 1080p 60fps and dat ‘Halo 5,’” writes a Halo player. “The fact that he was a WoW gamer has given his passing extra resonance amongst this community,” writes a ‘Word of Warcraft’ player. “It’s a tiny thing, but from now on when I play a game from ‘The Legend of Zelda’ series, I won’t be playing as Link. I’ll be using the name-entry so his name is Robin. It feels like the only tribute that I can give the man,” writes a Zelda player.

When I first asked DigInTheCrates, the Internet’s latest soothsayer, why he posted his peculiar thread on Friday and where that premonition came from, he demurred. But eventually, he opened up. “Alright, I’ll answer your questions,” he messaged me. “I’ll do it for Robin.” He told me that no specific event had inspired him to create the thread. He’d just woken up one morning and found himself thinking about Robin: specifically, about "how great he is, and how sad it is that he’s been suffering lately.” After the gamer's name, he included an emoji of a single rose.