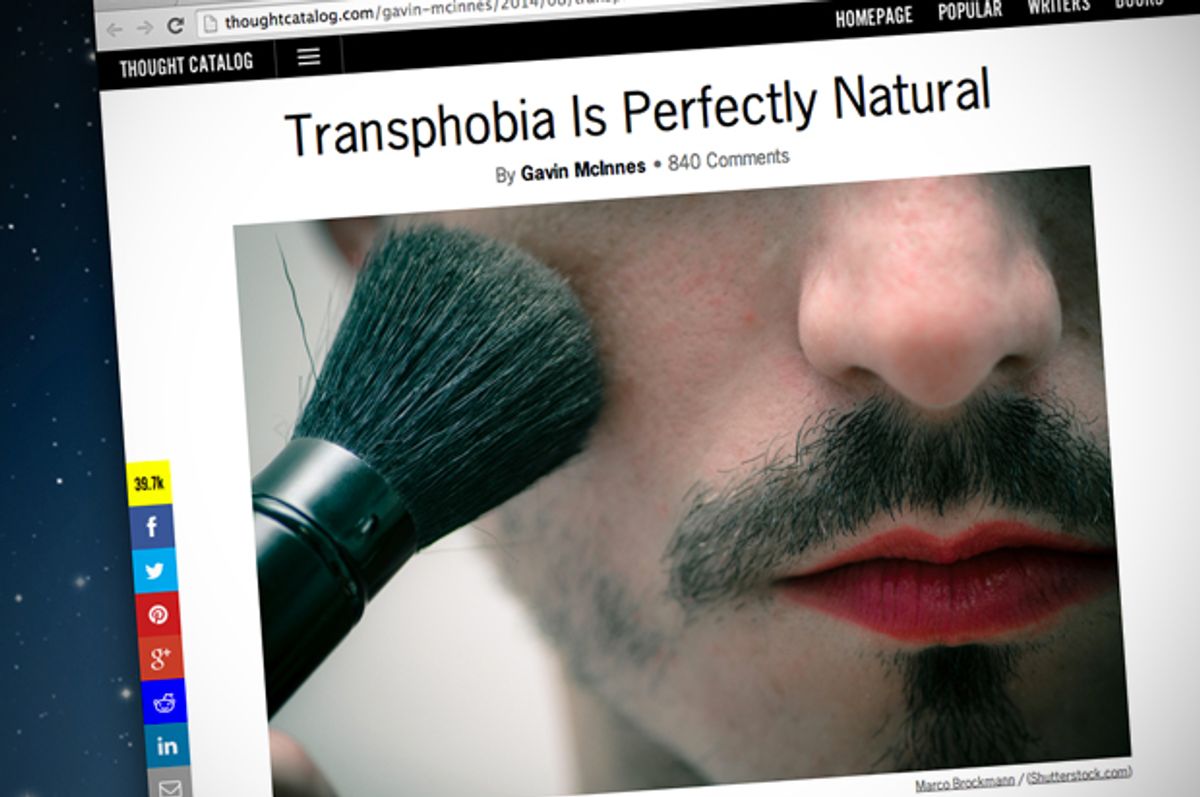 Gavin McInnes, the controversial co-founder of Vice who has published garbage like "When Is It OK to Hit a Woman?" and defends sexism to Sean Hannity, has outdone himself with a new piece of vitriol for Thought Catalog titled "Transphobia Is Perfectly Natural." In the essay, he dismisses people who identify as transgender as "nuts trapped in a crazy person’s body," and justifies transphobia, the hatred of a group of people who already face disproportionately high rates of bullying and suicide.

I don't want to republish this guy's toxic waste, but to show you just how horrible and damaging this is, here's an excerpt -- please be warned that it's really disturbing:

"We’re all transphobic. We aren’t blind. We see there are no old trannies. They die of drug overdoses and suicide way before they’re 40 and nobody notices because nobody knows them. They are mentally ill gays who need help, and that help doesn’t include being maimed by physicians. These aren’t women trapped in a man’s body. They are nuts trapped in a crazy person’s body. I see them on the streets of New York. They are guys with tits and a sweatshirt. They wear jeans and New Balance. “What’s the matter with simply being a fag who wears makeup?” I think when I see them. You’re not a woman. You’re a tomboy at best. Get fucked in the ass. And ladies, if you’re a butch lesbian, you’re a lady with a lot of testosterone. Put a dick on a belt and fuck your girlfriend. You don’t need to turn your vagina inside out. You’re not a man. You don’t even know what Turf Builder is.

The Advocate's Parker Marie Molloy raised a good question in response to this piece: "After publishing an absurdly transphobic missive, the question needs to be asked; at what point does an offensive opinion become hate speech?"

I dislike giving more attention to McInnes or Thought Catalog, both known for their trollish baiting, and considered ignoring this essay entirely. McInnes isn't going to stop writing about this stuff, but my (naive?) hope is that, even though it'll fuel traffic, Thought Catalog might reconsider this strategy. I hope that social media and the larger Internet community will put pressure on the site to stop publishing such abusive, intolerant words. Molloy and others are trying to do just that:

If Thought Catalog won't take this piece down, I hope that writers and aspiring writers will follow the footsteps of Molloy and KT Haché. But please, Thought Catalog, take this hateful trash down.