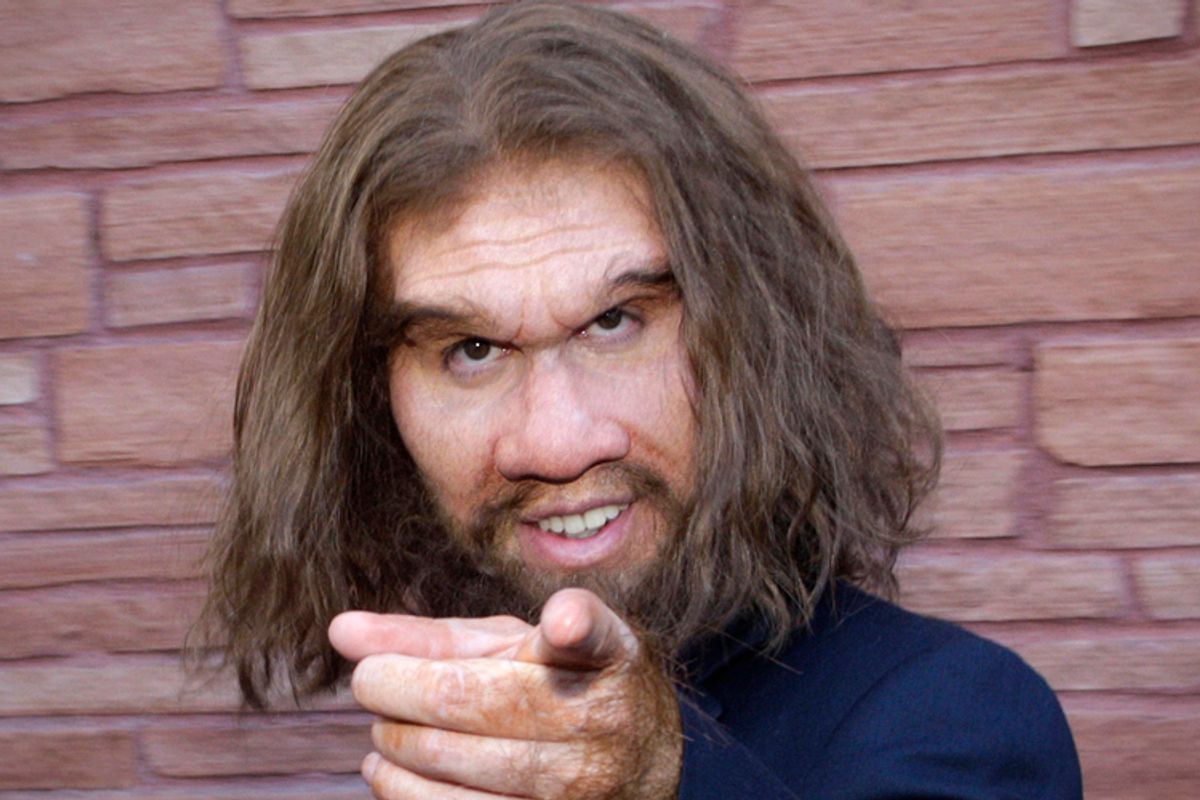 Does the Democratic Party have a white male problem? Are white men attracted to the GOP because they have a "natural instinct to protect their herd"? Are women easier to persuade than men? Will craft beer and mountain climbing help Democrats hold on to the Senate? Where do babies come from? Important questions, all. Unfortunately, writer David Catanese only grapples with the first four in a Tuesday piece for U.S. News and World Report. (David Catanese of the much maligned "legitimate rape" thought experiment.")

"The male drift from the Democratic Party, particularly white males, isn’t an entirely new phenomenon," he observes. "But in a campaign cycle set to see a handful of margin-of-error races that determine U.S. Senate control, it’s an often overlooked and undervalued element of the election."

Catanese goes on to ponder the white male turnout for the midterms and something about Colorado Sen. Mark Udall, IPAs and skiing, then does this (emphasis mine):

Democrats have held varying advantages among females going back decades, just as Republicans have with men. There are age-old reasons for this. Men are more drawn to the abstract ideology embraced by the GOP of self-reliance at home and a muscular defense abroad. Women are unsurprisingly more concerned about social issues like abortion because they directly affect their life and health care choices. Women also gravitate to a more collectivist view of society’s role, which fits neatly into the fabric of the Democratic Party, whereas men’s natural instinct to protect their herd attracts them to the individualist Republican identity.

Age-old reasons, indeed. (Early man had a notoriously Republican bend, by the way. Ogg, a caveman quoted in a Wall Street Journal article from 100,000 years ago, said he considered himself a "compassionate conservative," but felt that increases to food assistance programs like WIC would "create a culture of dependence" among single cave mothers.)

Catanese doesn't bother to support his age-old reasons with much of anything, even though I'm sure that he could have found some available research to make a claim about men and women's so-called political natures. (While, of course, ignoring cultural conditioning, social environment and the host of other factors that shape how we live our lives, experience our genders and vote or do not vote our interests in the United States.) But he doesn't have to, it seems, because he is talking about age-old reasons. The conventional wisdom on women and men requires no evidence, I guess.

The Mars/Venus thing is an enduring conceit. It can even feel tantalizing to believe that people can be born progressive by some accident of nature. But real life doesn't bear this out, and neither does research grappling with gender and difference. As a piece in the July issue of the Economist pointed out, as we get closer to answering some of those questions, the more we learn about how these differences are largely social, not genetic. One study from the International Institute for Applied Systems Analysis in Vienna found that rather than being genetic destiny, cognitive differences are "learned from the roles a society expects males and females to perform" and that "those differences can change as society changes."

The same could be said of the so-called empathy gap, the reasons for the dismal representation of women in science and tech, the lack of men in early childhood education. And as for Catanese's analysis about women's allegiances, it's worth noting that one of the architects of Texas' sweeping omnibus abortion bill is a woman. The lawmaker who pushed hardest to enact Tennessee's pregnancy criminalization law? Also a woman. And as the New Yorker's John Cassidy pointed out after the 2012 presidential election, white women come out hard for Republicans:

But nature. Or something.

The Democratic Party's lack of traction with certain white voters -- working-class men, older married women -- raises lots of questions about, say, racial anxieties at a moment of shifting demographics. But Catanese's piece doesn't reveal much of anything about gender or the actual forces behind voter turnout, though it does reveal something about him.