New York-based Stop Patriarchy says it's in Texas to "help." A coalition of advocates have said, "No thanks" 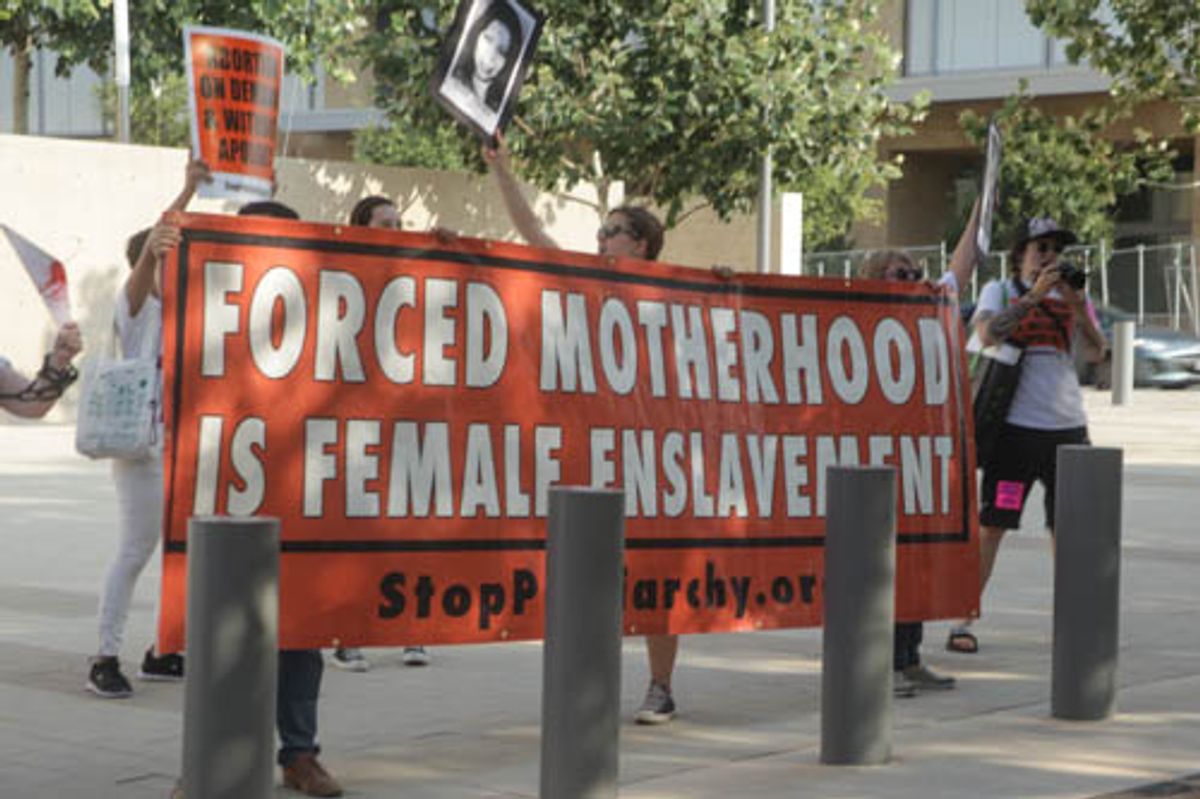 Texans are known for their hospitality. Just ask anyone who’s planned a visit to the Lone Star State. Honky tonk, BBQ and hospitality.

So why has the New York-based group Stop Patriarchy felt so much hostility as it's traveled around the state? Activists here say it’s only partly due to its $32,508 Kickstarter for this month’s “Freedom Ride," which is going into the production of a movie touting the group’s radicalism. The opposition has more to do with the way the group is going about it: no cooperation with local organizers and the unapologetic use of appropriative language.

"We love the support of outsiders, but we don’t need to be told about how we’re doing it wrong by not wearing chains and shouting,” said Sarah Tuttle, board member at the Lilith Fund For Reproductive Equality. "Feminism has left women of color by the wayside too many times. We will not be part of a movement that does that again.”

Among the props Stop Patriarchy has assembled for the “Freedom Ride” are chattel slavery-style chains Tuttle referenced and a 6-foot-long coat hanger with fake blood on either side of their printed website. They typically march a short distance to their protest location chanting, “Forced motherhood is female enslavement!” and carrying a banner that says the same.

Kit O’Connell, Texas-based gonzo journalist and editor at Firedoglake, agreed with Tuttle. “I don't want anyone to get the impression that we're closed to outsiders,” said O’Connell. "If a bus had driven into Texas with a few dozen volunteers, a film camera, and $35,000 and had then asked existing Texas activists, ‘How can we help?' the story would be very different now than the one we're telling of conflict and concern."

Stop Patriarchy had plenty of warning that many in Texas felt its presence was both unwanted and unhelpful. A sizable contingent of reproductive justice activists and organizations together penned the “United Statement in Opposition to Stop Patriarchy” under the collective title Texans for Reproductive Justice

Their statement in part declares:

"We, a united group of Texas reproductive justice activists, organizations and nationwide allies, oppose this “freedom ride.” We believe abortion care should be safe, legal and accessible to all who seek it. We oppose Texas’ abortion restrictions. We also oppose Stop Patriarchy’s messaging, tactics, dishonesty, and racism.”

One of the co-authors of the statement, Andrea Grimes, who is a senior political reporter at RH Reality Check, had heard of Stop Patriarchy before the “Freedom Ride” and began to take notice when the group caused disruptions at the Civil Liberties and Public Policy (CLPP) reproductive justice conference. Grimes said the fact that Stop Patriarchy is led by a white patriarch named Bob Avakian whose teachings for the Revolutionary Communist Party (RCP) are pushed at the group’s “People’s Forums” and counterprotests turned her off even more.

"They are a cult of personality interested not in working as allies but in converting everyone to their bizarre brand of commu-feminish-ism,” said Grimes. "I mean, when the feminist revolution comes, it isn't going to be led by a white, heterosexual cisgender man. It just isn't. That's not my feminist revolution.”

O’Connell first came into contact with Stop Patriarchy last summer at the capital when members were tabling and handling out RCP literature during the Wendy Davis filibuster and related Special Session actions.

"I was attracted by their name. My friends were screen printing a 'Smash Patriarchy!' design I still wear to this day, but [I] became disenchanted when I read their anti-sex worker positions,” said O’Connell. "There were a number of proud sex workers I worked closely with last summer in protests. Some of them were assaulted by troopers or arrested and it was important to me to be in solidarity with them. I still think it's important and that 'abortion on demand without apology' should include them and their work as well."

The Texans for Reproductive Justice statement lays out numerous troubling aspects to Stop Patriarchy’s tactics, positions and history. What stood out to most Texans during their Monday morning counterprotest at the courthouse, however, were the group's optics and ineffectiveness. Over and over you could hear people murmur:

“But why are they here?” “What are they accomplishing?” and “Are the white women wearing actual chains?”

Grimes echoed what bystanders noticed and reproductive justice activists of color have been demanding answers on since Stop Patriarchy announced the “Freedom Ride”:

"I oppose the appropriation of the language of the Civil Rights Movement in America, and taken in conjunction with Stop Patriarchy's relentless refusal to give up their "enslavement" language, I can only conclude the worst about Stop Patriarchy: that they are a movement more concerned with media attention and hyperbole — playing dress-up, walking around in pretend slave chains — than enacting the kind of systemic change that is most needed."

Most attempts to engage Stop Patriarchy on these issues result in denigration of the Texas state flag, cries of “McCarthyism!” or a list of predetermined talking points proffered as “facts.” The ease with which the group’s frontwoman Sunsara Taylor and others dismiss legitimate criticisms from longtime activists who have saved lives and changed the culture across this country is astounding to many activists in the state.

"When I hear people of color talk about how this appropriative language hurts them, how the slavery language erases their own lived, human experiences and that of their ancestors, how it only serves to reinforce a white supremacy that tells people of color their concerns will be addressed later, later, later — I cannot in good conscience stand with Stop Patriarchy on any level,” said Grimes. "Repeatedly, Stop Patriarchy has given excuses as to why they simply cannot give up the 'forced pregnancy is female enslavement' rhetoric and I have to wonder: Why is this ‘slavery' language more important than anything else? Why is using  'slavery' language more important than developing something more inclusive, more compelling, more ally-oriented?"

Most activists here don’t expect a substantive answer to those questions, they said.

Instead, they’re asking out-of-state allies to amplify the voices of those already doing the work on the ground.

Heather Busby, executive director at NARAL Pro-Choice Texas, emphasized the long-game strategy of those working to change stigma in her state.

“We are going around the state doing activist trainings and listening tours where people can speak to lawmakers directly about their concerns,” said Busby. “We are escorting outside the clinics and raising money to fund abortions as well as giving rides to people who need them.”

When she says “we,” Busby doesn’t just mean NARAL Pro-Choice Texas. As is typical of pro-choice and reproductive justice organizations and activists here, where the territory is vast and the need is great, she includes the collective work of many groups specializing in meeting the needs of their communities across the state.

“You don’t have just one protest and affect change; you’re not going to have a ‘revolution’ over abortion rights. You have to change the culture and reduce stigma. And you do that by having people speak about their experiences. That isn’t something you do by carrying coat hangers in the town square.”

Julie Gillis, reproductive justice activist and co-producer of BedPost Confessions, utilizes storytelling in her art and activism to effect the change Busby referenced. Her specific platform made her interested in the “People’s Hearings” Stop Patriarchy is holding on its tour. She watched the Houston event via the live stream.

"This mutual sharing of seeing and being seen, hearing and being heard, can create a feedback loop of intimacy and power that will shift and change the trajectory of people's lives in both subtle and profound ways," said Gillis, who said she didn’t see that happening at the “People’s Hearing.”

"I think for many Texans who have been telling and sharing stories about reproductive justice even far before the hearings last year,” said Gillis, “that medium has to contain vulnerability and to be inclusive of all, intersectional and thoughtful."

Martha Plimpton, actress and board member of the reproductive rights group A Is For, had originally signed on as a “Freedom Ride” supporter, not realizing the email came from Stop Patriarchy. She expressed similar concerns about the group’s lack of inclusiveness in its methods and rhetoric.

“I felt it was important to correct the error [of signing as a supporter], as A Is For doesn't agree with Stop Patriarchy's tactics and prefers to work with organizations for what they want and need,” said Plimpton. “Certainly my own error in signing automatically means I have responsibility, too.”

Stop Patriarchy removed Plimpton’s name from its supporter list after being contacted by her representatives and a set of tweets making her position clear.

This week Stop Patriarchy has moved on from Austin to San Antonio and plans to head to the Rio Grande Valley after that. It’s unclear whom they will be protesting in a clinic desert where activists like Lucy Felix of National Latina Institute for Reproductive Health have had to travel to the United Nations to tell the story of the crisis in her community. The contrast in tactics and cooperation should be especially stark on that leg of the “Freedom Ride.”

Update: After initially declining to comment for it, Stop Patriarchy issued the following response to this story:

"We are in a countdown to the completion of the most dramatic round of abortion clinic closures to hit a single state since Roe v. Wade. On September 1st, Texas could close all but six clinics (down from 46 in 2011).

The Christian fascist program of forced motherhood is fast becoming a reality. Relying on politicians, courts, and elections to stop this has proven to be a disaster. Funding abortions, while laudable, is a way to help individual women not a strategy to reverse this direction.

What is urgently needed is massive nation-wide independent political resistance.

Forging this resistance and changing the terms – bringing alive that the fight over abortion is over women's liberation or women's enslavement – is the Abortion Rights Freedom Ride 2014: Ground Zero Texas's mission. Our Advisory Board of nationally significant abortion providers, the thousands who have supported, and our dozens of volunteers who've been in Texas for over a month, urge all to join in this.

Debate over strategy is necessary, but we were shocked that Salon published Katie Klabusich's 'expose' about this Ride. Klabusich has made it her personal mission to wreck the ARFR. Her article is neither accurate nor objective. She has aligned with people who threatened physical violence against StopPatriarchy. She has instigated scandal then interviewed friends to support her position, and has refused open dialogue with StopPatriarchy."