John Oliver won't be your therapist: How he torpedoed the reassuring tropes of fake news

The "Last Week Tonight" host isn't interested in offering a balm for tough times. He wants you to pay attention 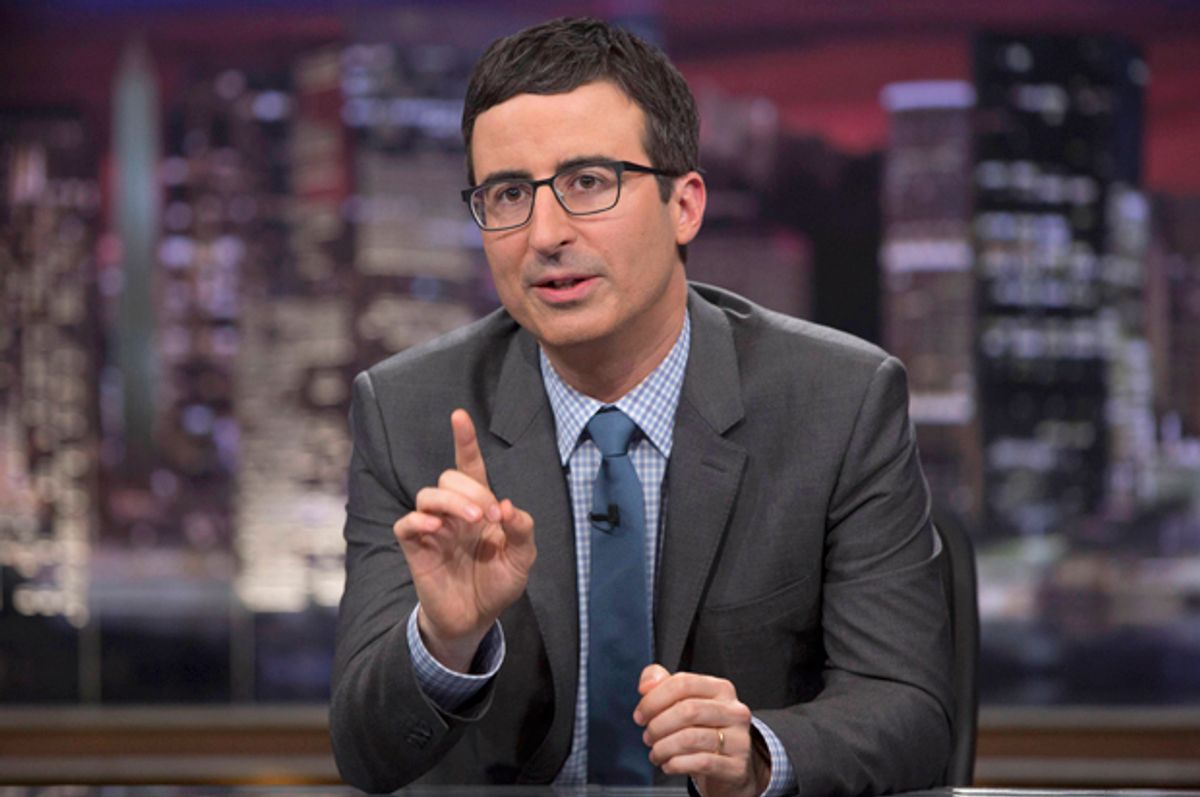 It’s been something of a shock — and a joyous one — to see how quickly John Oliver’s HBO program, “Last Week Tonight,” has gone from an awkward up-and-comer to an outright hit.

Not only is the program wildly popular with critics in the big markets, it’s being hailed in plenty of smaller regional venues. It’s pretty safe to say that landing an extended rave in the Auburn Citizen — circulation 10,000 — means you’ve broken out of the New York City media bubble.

The significance of the show’s surging popularity goes beyond its various laudable, and widely lauded, elements (the more diverse writer’s room, the commercial-free format, and so on). What the success of “Last Week Tonight” suggests, on a deeper level, is that American television viewers may finally be tired of the frantic bombast generated by the Stimulation Media.

What’s more, after years of making do with the therapeutic jibes of Jon Stewart and Stephen Colbert, they are finding in Oliver a figure more interested in making sense of the world than in making them laugh.

This is not to say that Oliver isn’t funny. He and his writers and guests have come up with some uproarious bits, most recently an infomercial supplied by comedian Sarah Silverman urging Americans in dire financial straits to do anything other than borrow money from a predatory payday loan firm. “People will pay you to pee on them,” she confides. “That’s true. Doodies too! Doodies are more. Like double.” But a bit like this is not the point of the show. It’s merely the scatological kicker to a much larger story, one about the rapacity of an industry dedicated to exploiting our most economically vulnerable citizens.

Oliver spent more than 15 minutes detailing what payday loans are, how the industry targets desperate consumers with misleading ads, conceals its draconian fees and dodges regulation. It was a tour de force of explanatory journalism. After eviscerating the obvious targets, Oliver even took aim at those consumers who fail to use common sense in dealing with their debt. Everyone involved had to shoulder some blame.

This was precisely the kind of story that would never appear on a fake news show. First, because it’s not part of the idiotic news cycle that most of those shows wind up aping (i.e., there’s no “hook”). And second, because it happens to be about the segment of our population most underrepresented in the media: poor people.

As much as Oliver has been praised for his radical decision to cover stories about people other than Americans — the election in India, Uganda’s state-sponsored homophobia, Singapore’s gambling problem — the most striking aspect of his editorial vision has been his willingness to turn his gaze away from our shiny temples of wealth and power.

Instead, he’s offered viewers a long, thoughtful disquisition on income inequality, an impassioned deconstruction of the death penalty and, more recently, a cri de coeur about the prison industry, which ran nearly 18 minutes. That’s almost as long as an entire “Daily Show.”

Not only did Oliver point out that America has more prisoners than any other country – nearly 1 percent of the population — he explained the historical reasons for this, the racism inherent in our criminal justice system, and the profound corruptions of privatization. He sprinkled jokes throughout this epic rant, most of which landed. (A clean-cut Brit who favors boxy suits and skinny ties, Oliver exudes the goofy charm of a substitute teacher, which often masks the subversion of a first-class wit.)

But the crucial innovation of his show is that it dares to privilege education over entertainment. And as a viewer, therefore, I’m in a different headspace when I watch “Last Week Tonight.” I’m not constantly waiting to have my outrage lanced with a joke. I find myself more compelled by the ways in which Oliver serves as a cultural narrator rather than a court jester.

For the past two decades, as our civic institutions have become increasingly corrupt and decrepit, Americans, particularly on the left, have turned to our court jesters as a means of opiating our anger and helplessness. Morality gets served up, these days, with a mandatory laugh track.

Oliver and his staff seem to recognize that the vital ingredient isn’t the gags, but the capacity to tell large and disturbing truths about these broken institutions. In contrast to the fake news programs, he doesn’t much rely on punny graphics and rapid-fire video montages. In short: He appears to have evolved past the point of shtick.

There are moments during “Last Week Tonight” when I can sense Oliver’s nervous need to crack wise. This makes all the sense in the world. He made his name at "The Daily Show,” where big laughs were the coin of the realm, and still performs stand-up.

I often find myself wanting to say to him, “Hey, man, you don’t need to prove you’re clever, or make a dumb joke about Cheerios. We’re with you. Just trust the story you’re telling, and the power of your insight, and that’s enough.”

But in fairness, most of the time Oliver seems to have the same instinct. When he makes a joke he rarely luxuriates in the ensuing laughter — as Stewart and Colbert do reflexively. He often actually interrupts the laughter a bit, in his eagerness to get on with the story.

In the end, the segments that have critics and regular old people buzzing aren’t necessarily the funniest. They’re the ones in which Oliver is teaching us something vital that the rest of the media has not seen fit to cover. Or which they cover so simplistically or sensationally as to render unintelligible.

The quintessential example was Oliver’s exploration of those who oppose "net neutrality," a term I had read and/or heard a hundred times but never (for the life of me) understood. Oliver spent more than 13 minutes explaining why eliminating net neutrality would allow huge cable companies to jack up prices. What people remember about this segment isn’t the cheap laugh he got slagging Sting, or his awkward effort to imitate a mobster. What they remember is the piercing insight he delivered about why the public has yet to raise any hue and cry about net neutrality. “The cable companies have figured out the great truth of America,” he noted. “If you want to do something evil, put it inside something boring. Apple could put the entire text of ‘Mein Kampf’ inside the iTunes user agreement and you'd just go ‘Agree.’”

They might also remember that Oliver helped crash the FCC’s website by encouraging his viewers to send them comments — a call for direct citizen activism almost never seen in the world of comedy news, where the goal is to relieve, rather than incite.

Oliver’s most recent coup was a segment about “native advertising” — sponsored content dressed up as news — that doubled as a sophisticated lesson in the historical relationship between corporations and the Free Press. Among his most prominent targets was the New York Times, the supposed gold standard of journalism in this country. I’m sure this marks me as naive, but I’d never heard the term "native advertising." I have now.

As corny as it might sound, Oliver is performing a public service with his program. He is following in the tradition of our finest journalists, which is to help us understand the hidden systems of power and injustice in the world around us.

It is my hope that he’ll see the initial success of “Last Week Tonight” as a testament not to his comedic chops but to his moral instincts, and to the stunning, hopeful revelation that Americans want more substance and insight than they’ve been getting from their Fourth Estate — even from a Brit who steps on his own laugh lines.