Journalists arrested, tear-gassed as protesters are abused for another night. Where is the political leadership? 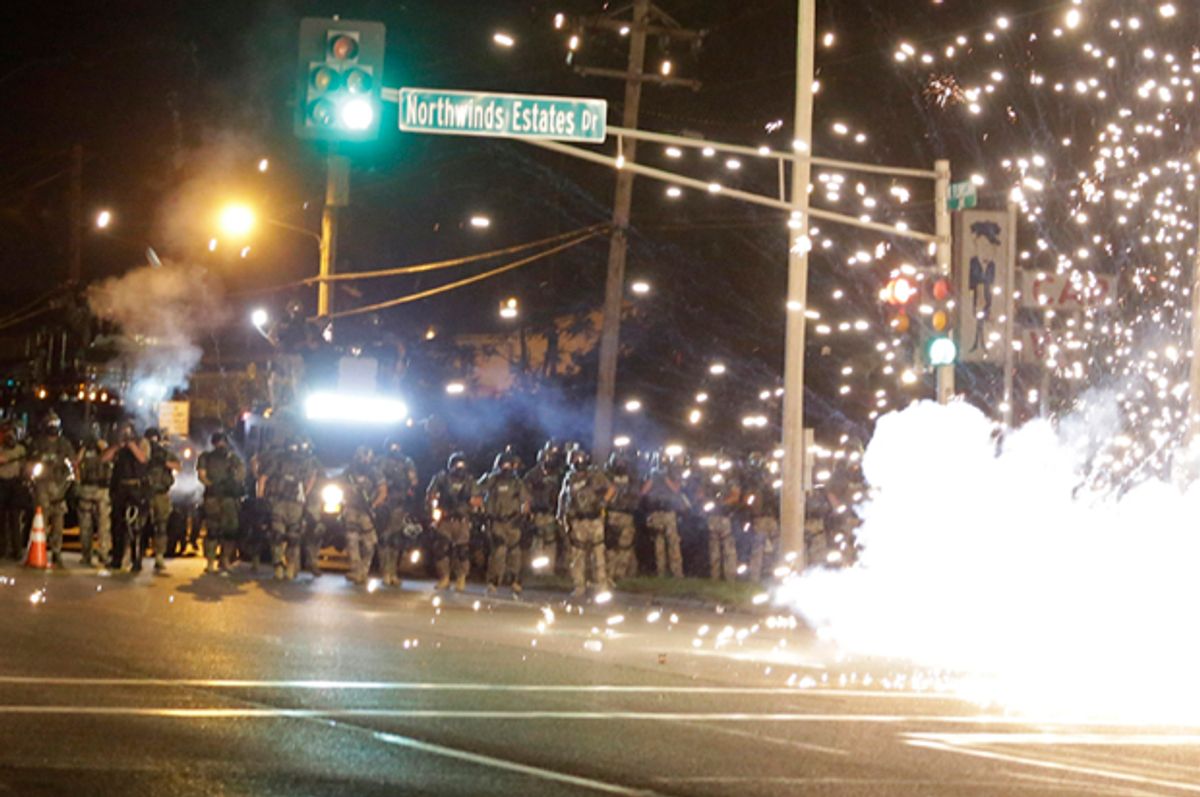 A device deployed by police goes off in the street as police and protesters clash Wednesday, Aug. 13, 2014, in Ferguson, Mo. (AP/Jeff Roberson)
--

The news and images from the conflict between a stunningly militarized police force and peaceful community protesters in Ferguson, Missouri, were horrifying Wednesday night, even before reporters from the Washington Post and Huffington Post were arrested, and MSNBC’s Trymaine Lee was tear-gassed and terrorized.

Let’s be clear: Michael Brown’s killing remains the horror here, but the cops’ continued brutality, against peaceful protesters and reporters, has been appalling. Every news anchor should broadcast from Ferguson on Thursday.

Wesley Lowery of the Washington Post and Ryan Reilly of Huffington Post were arrested after police tried to clear out a McDonald's in which they were working. MSNBC.com’s Trymaine Lee, who has been doing crucial reporting from Ferguson (as he has from so many scenes of violence and police-community conflict this year), was choking on tear gas, and could barely speak, as he tried to narrate the chaos on MSNBC’s “Last Word” Wednesday night. Lee said cops began lobbing tear gas and flash grenades within only 15 seconds of warning the crowd.

“This looks like a textbook case of what not to do,” Sherrilyn Ifill of the NAACP Legal Defense Fund told Lawrence O’Donnell.

On the 49th anniversary of the 1965 Watts riots in Los Angeles, it’s important to remember that the famous Kerner Commission established to look at 1960s urban upheavals found that virtually every “riot” was triggered by police brutality – and that has continued in our own time, from the so-called Rodney King riots in 1992 through today. On MSNBC Ifill indicted the failures of police training and culture that led not only to the killing of Michael Brown, but also the overreaction to every night of protests.

But Ifill also made the important point that the militarization of the Ferguson police is something entirely new and enormously disturbing. The images Wednesday night should wake all of us up to the alarming militarization of local cops all over the country. How did a local police department get tanks and trucks and body armor that look like it all was designed for the streets of Baghdad and not a little city outside St. Louis?

I know the answer; good journalists have been reporting on this for a while. I apologize for not writing about this sooner. This is a bipartisan disaster that ought to be inspiring a renewal of bipartisan cooperation between civil libertarians of every political stripe. Yet local and national political leaders have been under-involved.

Alderman Antonio French has become a folk hero on Twitter for his on-the-ground reporting. But Gov. Jay Nixon, a Democrat, has been mostly AWOL, and Sen. Claire McCaskill belatedly tweeted that she’s communicating with the Justice Department Wednesday night. (While her tweet seemed belated, I should note that McCaskill had been in touch with the Justice Department before that.) Missouri's other senator, Republican Roy Blunt, has said nothing. In this obvious libertarian moment, Sen. Rand Paul has been silent, reportedly fundraising in the Hamptons this week. (Update: Paul just wrote this for Time.)

President Obama lamented the killing of Brown, and Attorney General Eric Holder announced the Justice Department will investigate it, but the administration has said nothing to date about the police department brutality using federally funded weaponry.

Michael Brown's killing was awful enough, but the Ferguson police department's crude and brutal crackdown on protest reminds us that the so-called war on terror is now terrorizing innocent people -- in this country too.