Michael Brown, now dead, has no anonymity. His past will be excavated. What about the cop who shot him? 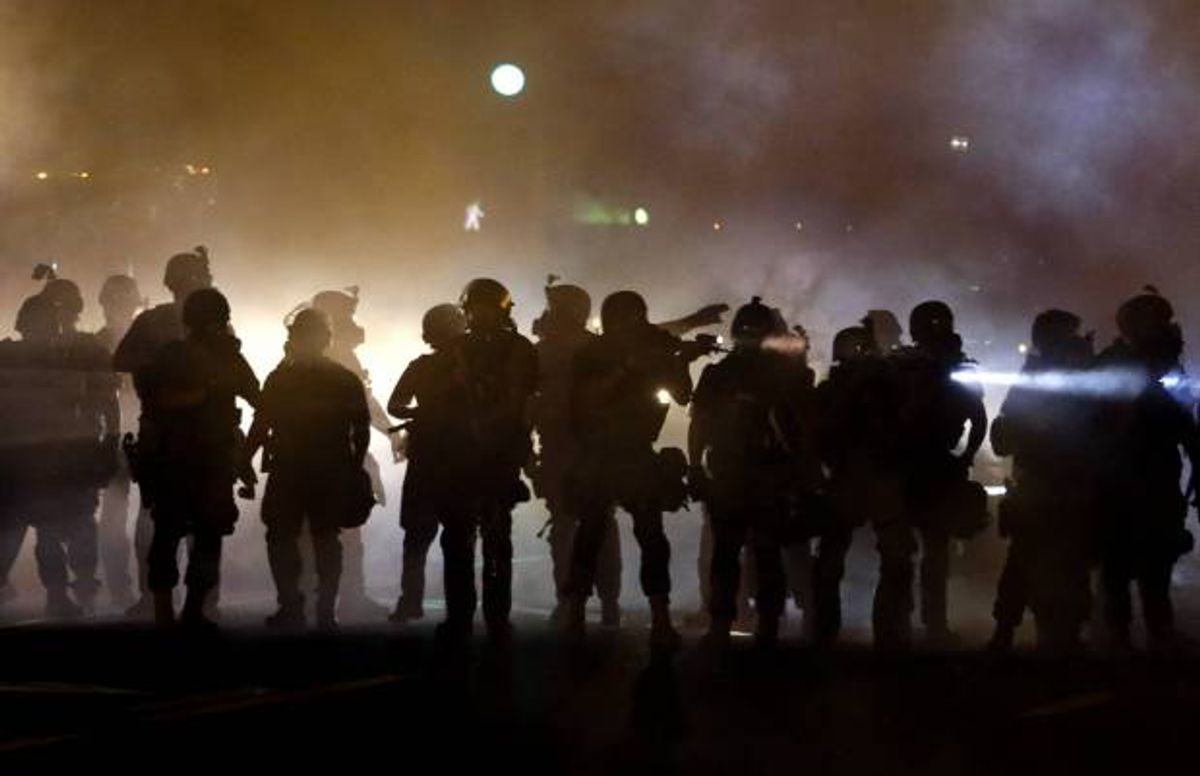 The portraits delight and haunt:  Black and brown kids in tuxedos, in football uniforms, nuzzling their pet rabbits, juxtaposed with staged images of the kids faux-gangster style. Ask yourself: What kind of nation do we share, when vulnerable kids feel compelled to create their own hashtag #IfTheyGunnedMeDown?

Yet another pair of parents now mourns the shooting death of their unarmed son in a “stand your ground” state. Ferguson, Missouri, the St. Louis suburb where 18-year-old Michael Brown was gunned down Saturday, is 67 percent black and 29 percent white, according to the most recent data. Ninety-four percent of the community’s police force is reportedly white.

As important, the state’s strong gun lobby helps sanctify its shoot-first values. Pain sears any reasonable conscience learning that another unarmed black youth, apparently in surrender, has been killed.  Anger singes any reasonable mind wondering why and how the young man died.

Michael Brown was not Trayvon Martin. Each boy lived his own individuality, enjoyed his own humanity.  And unlike Trayvon’s, the exact circumstances of Michael’s shooting remain to be investigated.

In this process, here’s a start: Authorities should release the name of the Ferguson police officer who, at present, is shielded in police secrecy. This situation is not a 12-step program, Debtors or Alcoholics Anonymous. Why is the Ferguson police officer being granted the benefit of anonymity even as a youth is dead?  Not only does Michael Brown have no anonymity, his family should brace itself: Police apologists and right-wing news media are chomping at the bit to excavate the deceased boy’s past – school records, potential recreational drug use, friendships, etc. — publicly to smear his name as a means to justify his death.

Hopefully, the law will distribute justice, however necessary, in Michael’s case.  But then there’s us, our communities, and the value of our lives. This time around, a grass-roots and political response to a young man’s death must actively confront all the problems at play: race, racial profiling, a powerful, profit-obsessed firearms lobby, “stand your ground,” youth, young people’s perceived poverty and criminality, and gun capitalism in America.

After publishing an Op-Ed in the New York Times about Trayvon’s death, I received over a hundred positive and pro-youth emails.  But I received as many negative messages, such as:

This has to do with crime and danger. We've all been shown an adorable picture of Trayvon that turns out to be five years old at least. We find now that he was tattooed, had gold teeth, possessed marijuana, used gang signs on his twitter account, assaulted a bus driver, possessed tools in his backpack, and womens' jewelry not belonging to him. He was suspended from school for ten days. Also, he was a strapping guy who was over six feet tall.

This email — representative of dozens of others that I received — maintains that Trayvon had it coming to him, as though tattoos, a school suspension and so on warrant an unarmed innocent minor being gunned down. I had to point out to such readers the obvious: Even if Trayvon had been a convicted felon, he deserved his humanity and proper due process treatment from legitimate law authorities.

Every time such a tragedy erupts, certain people in the U.S. — use your imagination — get forced to revisit our own brushes with profiling. The drumbeat of such shootings should horrify. I revisit thoughts that I first shared on this site.

Weeks before George Zimmerman’s acquittal, I returned to New York City from Fire Island on a Sunday evening, and decided to stop by my office.

After I let myself into the office, I noticed some white folks mingling around. I paid them no mind, since our office often has off-hours visitors who rent the common space.

“Can I help you?” said a middle-aged man, testily.

“Oh,” he said, stepping back slightly.  “I saw you and just wanted to make sure things are OK.”

“Thank you, George Zimmerman,” I said.

Weeks later, when Zimmerman was acquitted, my sarcastic one-off felt more warranted than I could ever have imagined.

Here, this typical “Can I help you?” doubles as a passive-aggressive demand for me to justify my presence even where I belong. Thankfully, I have never encountered an armed white person on the other end of that presumption.

Some youth pay for that common presumption with their life.

The Zimmerman acquittal, as I warned then in Salon, would have devastating consequences.  The verdict served a green light for every paranoid vigilante to go on victimizing black youth.

Since our juridical establishment often turns its head – or even winks – at the prevalence of racial profiling and police brutality against black and brown people, we are faced with yet another horrific case. Implicitly and explicitly, the law condones this racial paranoia. The so-called rationales used to design and peddle the “stand your ground” credo, “stop and frisk” laws, and anti-immigrant hysteria fuel the very vigilante mentality putting many young people at dire risk.

Why did leaders ignore George Zimmerman’s acquittal, such a brutal cautionary tale on racial profiling and vigilante justice? Why do they embrace the paranoid logic of gun capitalism?  Zimmerman claimed he didn’t feel safe. Did Trayvon feel safe?  After all, the youth was shot by an assailant with a troubling history with law enforcement.

It’s a mordant case of déjà vu, this willful ignorance on our leaders’ parts. Why hasn’t the 2012 Aurora shooting and the 2012 Newtown massacre forced us all to confront the illusory sense of safety in our communities?

With "Regeneration Through Violence," "The Fatal Environment," "Gunfighter Nation," Richard Slotkin delivered a masterful historical trilogy on this country’s long-standing love affair with vigilantism, cruelty and gun violence.  Read carefully and Slotkin’s masterwork offers trenchant insight into these shootings, alongside the racist vitriol documented by George Zimmerman and certain cops.  The penetrating trilogy uniquely exposes the ugly, barbed issues at work, from the colonial era on.

Today, the questions remain: How will law enforcement maintain “justice” in a country getting browner by the day? And in a nation that feels the need to “regenerate” itself through violence? What will this country do to keep young people safe?

Our violent frontier myth dominates our politics and culture, from the Pentagon to the trenches of local policing. We remain a gunfighter nation. From Trayvon to the kids in Newtown to Michael Brown, young people are vulnerable to mentally ill or paranoid or racist adults wielding guns. Sadly, Michael’s parents’ pain serves as a blunt reminder of who writes our laws, who enforces our laws, and the very presumptions guiding our laws.

Meantime, in their own preemptive strike, our youth grasp to shield themselves with irony and a hashtag.