"The Trip to Italy": A deceptively genius road-trip romp

Steve Coogan and Rob Brydon do Italy in another faux-casual comedy of death, poetry and Michael Caine impressions 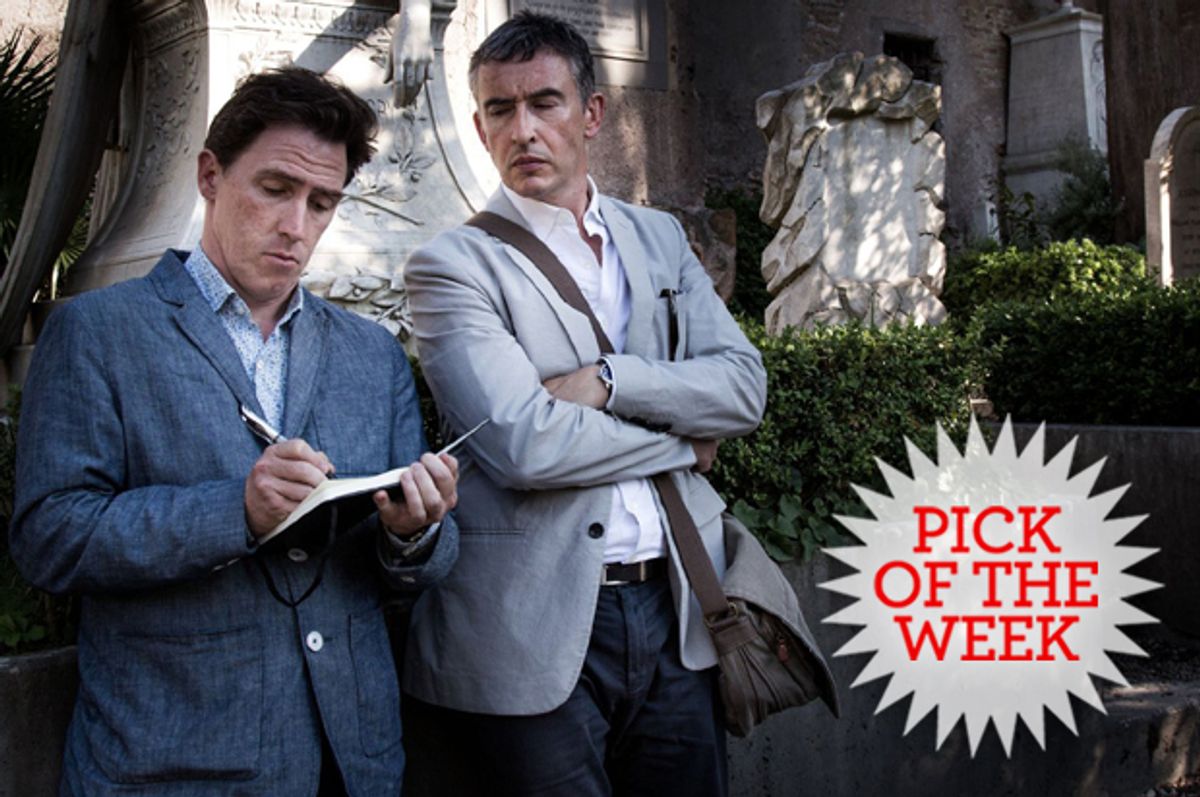 When British comedians Steve Coogan and Rob Brydon find themselves in the catacombs of the Fontanelle Cemetery in Naples, an ancient underground ossuary visited by Ingrid Bergman in the Rossellini film “Journey to Italy,” they can’t help trivializing the whole experience. “This place reminds me of one of your shows,” Coogan says to Brydon, gazing around at the piles of skulls and human bones. “It’s full. I’ll give you that.” A few minutes later, Coogan calls an abrupt halt to the banter and one-upmanship to deliver an impromptu reading of Hamlet’s famous graveyard speech to the skull of a jester he once knew: “Alas, poor Yorick! I knew him, Horatio: a fellow of infinite jest, of most excellent fancy: he hath borne me on his back a thousand times, and now, how abhorred in my imagination it is! … Where be your gibes now? Your gambols? Your songs? Your flashes of merriment, that were wont to set the table on a roar?”

That sudden pivot, from irrelevant and irreverent middle-aged farce to somber consideration of mortality, is precisely the subject and method of “The Trip to Italy,” which reunites Brydon, Coogan and writer-director Michael Winterbottom for a sequel to their peculiar but delightful 2010 road comedy “The Trip.” From the beginning, Coogan is openly skeptical when Brydon proposes another all-expenses, food-and-wine trip to luxurious destinations (their first voyage took in the English Lake District). Everybody knows that a band’s second album is likely to be “a bit of a damp squib,” and movie sequels are generally terrible. “‘Godfather II,’” Brydon replies, and Coogan rolls his eyes, because that's the exception that everyone comes up with, and only serves to prove the rule. That of course provokes Brydon to his very funny Al Pacino impression – we get to hear a great deal of that one, maybe too much – and as we say these days, it’s on.

I am not the first to make this joke, but “The Trip to Italy” may live up to the “Godfather: Part II” analogy, at least insofar as it’s better and tighter than its predecessor. There’s even more spectacular scenery, from those Neapolitan catacombs to the Isle of Capri to the excavated ruins of Pompeii, and the two wags of course indulge in their now famous (and YouTube-friendly) warring Michael Caine impressions one more time. There’s an extended riff on an imaginary episode from the set of “The Dark Knight Rises,” in which an assistant director tries to tell both Christian Bale and Tom Hardy that nobody can understand them, that’s one of the funniest improv bits ever committed to film. (And another, with Brydon as a fatuous British TV host belittling Coogan in an interview, that reduces them both to helpless laughter.) But neither of the “Trip” movies is just random comedy bits; although partly improvised and deliberately episodic, they are actually carefully constructed narrative films with actors and characters.

That’s an important concept that bears repeating, because many potential viewers may be scared off by the idea that they’re just seeing a highlight reel from Coogan and Brydon’s TV series, or some kind of loosey-goosey travel documentary featuring two comedians who remain almost unknown in America. Not so at all. Remember that we’re talking about Michael Winterbottom, an ingenious craftsman who constantly seeks to break the frame and excels in concealing one kind of story as another: He has twice made radically restaged adaptations of Thomas Hardy novels ("Trishna" and "The Claim"), captured the spirit of the drugged-out Manchester music scene in “24 Hour Party People,” blended documentary and fiction in “The Road to Guantánamo” and made a self-unraveling non-adaptation of Laurence Sterne’s unfilmable “Tristram Shandy.”

So “The Trip to Italy” is not artless, just meant to appear artless. There may be elements of reality in the contentious relationship between Coogan and Brydon, for instance, but they are playing fictional versions of themselves with fictional families and heavily fictionalized careers: Brydon’s screen wife is not his actual wife, and the tour guide he sleeps with (spoiler alert!) is an actress too. As for Coogan’s anxious relationship with his teenage son, Joe, who gets stranded in Ibiza and has to come tag along on Dad’s big trip – well, Coogan doesn’t have a son. Sadly for both guys, Coogan has not spent two years as the star of an American TV drama, and Brydon will not be playing a mob accountant in an upcoming Michael Mann movie. (Not that they couldn’t do those things; these guys can be a bit prickly.)

Furthermore, when we get to the question of what “The Trip to Italy” is about – well, the food and wine of Italian resort destinations, although it looks superb, is down around eighth or ninth on the list. It’s about “poor Yorick” and what befell him and will befall us all, calamari and Pinot Grigio or no. One of Brydon’s funniest and most obnoxious bits in the movie – there’s no clear boundary between the two – is his imaginary dialogue with a fossilized corpse at Pompeii, whom he basically voices as Jimmy Stewart trapped in a box. It’s not just about Brydon and Coogan’s pop-culture obsessions – although there’s a good deal more discussion of Alanis Morissette than I was expecting -- but also their pursuit of Shelley and Byron, most famous of English expats in Italy, whose onetime haunts are now surrounded with 21st-century commerce and kitsch. (Brydon observes that the statue of Byron in the Villa Borghese gardens in Rome makes him look like George Michael in the “Careless Whisper” video. Yes, he’s deliberately getting it backward, a key element of his shtick.)

Winterbottom gives these two guys the freedom to make complete asses of themselves, to venture into thoroughly offensive comedy and then try to struggle back to safety, to depict themselves as lecherous, defensive, death-haunted and human. Coogan comes across as a fair bit nicer this time around, which considering his reputation as a flaming egomaniac with a history of intense debauchery, may not be saying a lot. (After his success as writer, producer and star of the Oscar-nominated “Philomena,” he may be trying to position himself as less of a sardonic funny man and more of an auteur.) Brydon, who is far more likable, remains so uneasy in his own skin that he can’t recite a Byron poem without doing it as Richard Burton or Anthony Hopkins or Hugh Grant. (His Grant is priceless; his Woody Allen is nowhere near as good as he thinks it is.)

Last but certainly not least, “The Trip to Italy” is haunted by echoes of other films about English-speaking visitors to that ancient sunlit peninsula. First and foremost there’s the Rossellini film mentioned above, shot in Pompeii and the Naples catacombs in an earlier tourist era. It’s a bitter-flavored drama with an implausibly happy ending, with Bergman and George Sanders playing an estranged English couple on the verge of divorce, whose visit to Italy rekindles something that had long seemed lost in their marriage. And then there’s “Roman Holiday,” with Audrey Hepburn and Gregory Peck, perhaps cinema’s most beloved story of unconsummated love and duty to others placed above self. While we await the fate of Yorick, we all yearn to have such nobility or experience such an epiphany. Instead, we make do with lobster risotto and gags about Michael Caine burying Batman.