Since 9/11 we've spent huge sums to outfit local authorities with military gear. It's un-American -- and here's why 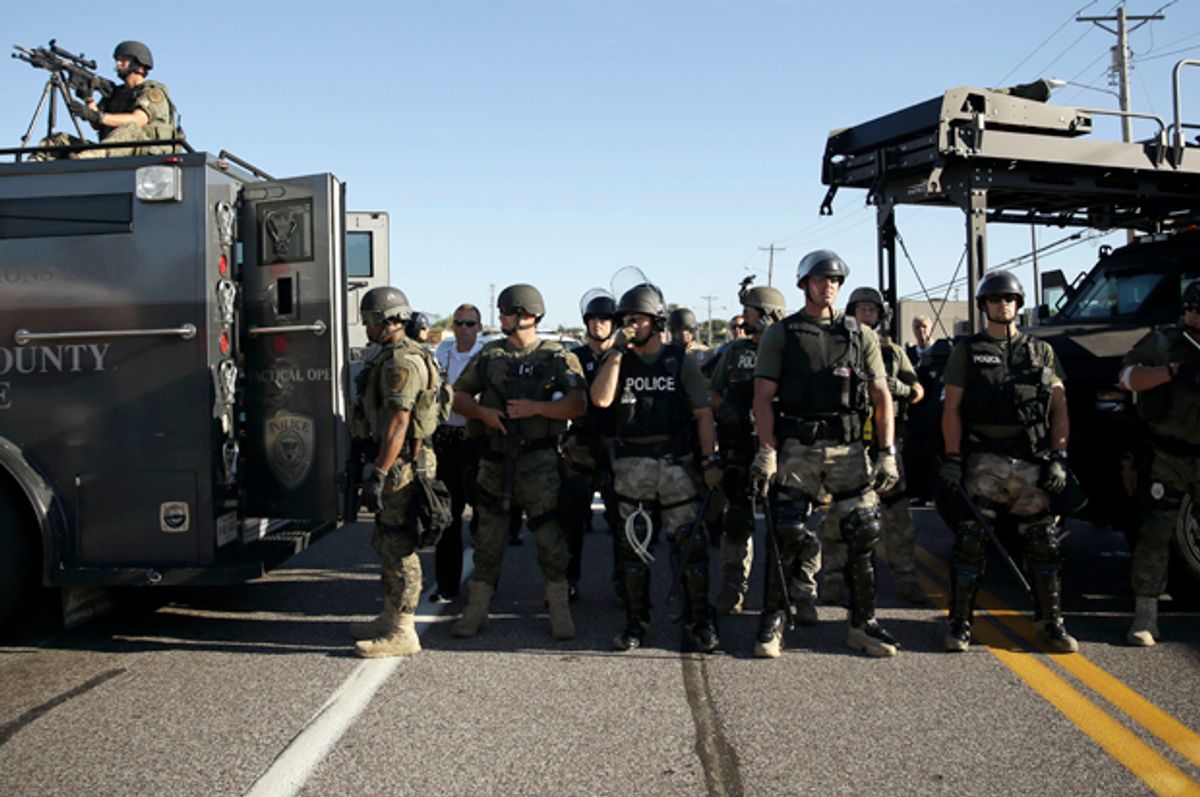 Sometime after 9/11 strange stories began to emerge about small town police agencies all over the nation receiving grants from the newly formed Department of Homeland Security to buy all kinds of high-tech equipment to fight "terrorism." One famous early example from 2006 was a bizarre report from the village of Dillingham, Alaska:

[E]yebrows were raised in January when the first surveillance cameras went up on Main Street. Each camera is a shiny white metallic box with two lenses like eyes. The camera's shape and design resemble a robot's head. Workers on motorized lifts installed seven cameras in a 360-degree cluster on top of City Hall. They put up groups of six atop two light poles at the loading dock, and more at the fire hall and boat harbor. By mid-February, more than 60 cameras watched over the town, and the Dillingham Police Department plans to install 20 more — all purchased through a $202,000 Homeland Security grant meant primarily to defend against a terrorist attack.

Dillingham has a population of 2,500 people. It is only reachable by boat or plane.

As Radley Balko thoroughly documented in his book "Warrior Cop" the military industrial complex has created a new industry: the police industrial complex. And it's been quietly militarizing our police agencies for quite a long time. Indeed, he traces this trend back to the early 1980s under the freedom- and liberty-loving Ronald Reagan. The Gipper deemed the drug war to be a real war and easily passed the Military Cooperation With Civilian Law Enforcement Act, "which allowed and encouraged the military to give local, state, and federal police access to military bases, research, and equipment." The police got training from the armed forces to use their new war-making equipment and the military became involved with intelligence and operations in the drug war. Every president since then, including the current one, has reauthorized the program, putting more and more money on the table. Balko wrote, "Then-Secretary of Defense Dick Cheney declared in 1989, 'The detection and countering of the production, trafficking and use of illegal drugs is a high priority national security mission of the Department of Defense.'"

So this really isn't a new thing. But it's been on steroids since 9/11 with the creation of the new Department of Homeland Security. Needless to say, that was just the tip of the iceberg. Since 9/11 the United States has been spending vast sums of money through DHS to outfit the state and local authorities with surveillance and military gear ostensibly to fight the terrorist threat at home.

What we have been seeing in Ferguson, Missouri, these past few days is largely a result of that program -- and an entire industry has grown up around it. Attorney General Eric Holder is reportedly concerned about this deployment of military gear. Where in the world has Eric Holder and every other officeholder who's expressed dismay these last couple of days been? This equipment didn't just materialize on its own. As we've seen, it's mostly been paid for by the federal government. Indeed, in less than a month a group of militarized police equipment vendors across the nation will be gathering for an annual confab called "Urban Shield" ("Critical training for critical time") in Oakland, California. It features dozens of sponsors, from the Department of Homeland Security and police agencies all over the country to such vendors as Armored Mobility Inc., which bills itself as "the Worldwide Leader in Dynamic Mobile Armor and Shields: Today's threat is rifle rounds and they are coming in bunches, through doors, walls and ceilings! Our Dynamic Armor and Mobile Armored Shields will save lives!!!!" Here's one of its "highlight" videos:

The Department of Homeland Security disburses somewhere in the vicinity of $3 billion a year for this sort of thing. Add in the loot that's legally appropriated by police agencies in the war on drugs and you have a massive incentive to turn the streets of Ferguson, Missouri (or Zuccotti Park) into a scene that looks more like the siege of Fallujah. After all, that's explicitly what that video is telling these "troops" they need the Robo-Cop equipment for. And that's the problem. If you build a police state, the police are going to want to use it. It's human nature. In fact, according to Balko, they're commonly using SWAT teams to deliver all search warrants in some jurisdictions now -- no matter what the crime. What else are they going to do? There simply aren't enough "sieges" going on in any given town on any given day to justify all this gear.

All this week people were shocked to see police officers dressed up in what one wag called "commando-chic" pointing guns directly at unarmed civilians. They were taken aback at the idea that heavily armed officers wearing desert battle fatigues would enter a McDonald's where children were present to roust the customers and arrest reporters who were sitting quietly charging their laptops. They saw the unmotivated discharge of tear gas and rubber bullets at protesters. They wondered why there were tanks and automatic weapons in our streets. Well, it's a long overdue wake-up call. We've been spending billions of taxpayer dollars for decades to turn the streets of urban America into a war zone at the merest hint of dissent. And now it's here.

One cannot help noticing, however, how differently members of the right react to protests over a police officer gunning down unarmed young men in the streets and their reflexive support of Cliven Bundy's armed resistance last April when the government seized some cattle to pay for a delinquent tax bill. In fact, some of the most common right-wing images from the stand-off were the pictures of six cows "murdered" by jackbooted thugs accompanied by screaming headlines about "mass graves." (The government admitted that six cattle were euthanized. Unfortunately, they never made it to market where they could be served as steaks alongside others from their herd at the Bundy Bar-b-que.) The killing of Michael Brown and the subsequent protest have brought headlines like "Five Race Riots in Obama's Post Racial America." But then, the Bundy protests were about property, something much more sacred than the life of a young black man ever is.

You need only check in with appalling hate talk show host Laura Ingraham to understand where they are coming from. As Media Matters noted with astonishment, last April Ingraham called the Bundy protesters the new "Freedom Riders." Yesterday, unbelievably, she characterized the Ferguson protesters as a "lynch mob."(Yes, she really said that.) So I wouldn't expect much solidarity from the Bundy bunch.

Rand Paul, at least, has stepped up. He's wrong on many things and a hypocrite about many others. But when he's right, he's right:

When you couple this militarization of law enforcement with an erosion of civil liberties and due process that allows the police to become judge and jury—national security letters, no-knock searches, broad general warrants, pre-conviction forfeiture—we begin to have a very serious problem on our hands. Given these developments, it is almost impossible for many Americans not to feel like their government is targeting them. Given the racial disparities in our criminal justice system, it is impossible for African-Americans not to feel like their government is particularly targeting them.

It is not hard to predict the results of importing this battlefield mentality onto American soil, aimed at American citizens: “From Warfighter to Crimefighter.” The results have been clear for those who have looked – or those who have been subject to this – for years. The events in Ferguson are, finally, forcing all Americans to watch the outcome of this process.

There's a reason the Pentagon made reporters "embed" with them during the Afghanistan and Iraq campaigns rather than allow them to report on their own. They learned their lesson from Vietnam: control the images of the fight lest the American people see the horror in their living rooms. It's the same reason why police are often confiscating video shot by citizens. It's why they arrested those reporters in Ferguson on Wednesday night. Once you let the American people see the war with all its domineering violence they will question its necessity. The police in Ferguson have been unable to keep the press from showing those pictures of tanks running through the streets of an American town to quell unarmed protests over a police shooting of an unarmed teenager. And the American people are questioning it. Finally. Maybe, at the very least, we can agree that enabling our police to adopt the ethos that the people are their enemy might just be a little bit un-American.