"He is a hero": Why the KKK is raising money for Ferguson police officer who shot Michael Brown

Desperate for publicity and any opportunity to spread hate, the KKK said more white cops should follow suit 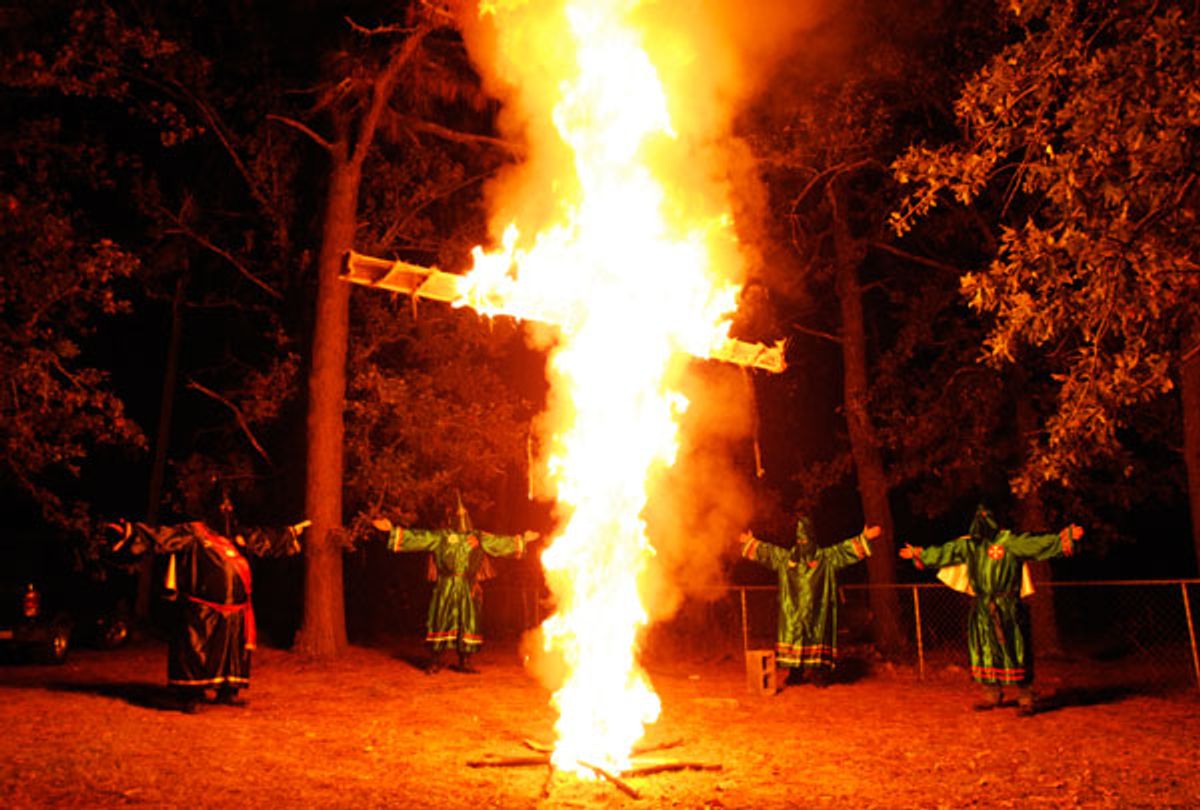 The one thing the racially charged and besieged city of Ferguson, Mo. does not need or want to add to the combustible mix of rubber bullets, snarling police dogs and clouds of tear gas that have filled its streets for three days is the Ku Klux Klan.

But the Klan –– desperate for publicity and any opportunity to spread hate and terror –– is climbing atop the powder keg that Ferguson has become following the police killing of an unarmed college-bound black teenager last Saturday.

The South Carolina-based New Empire Knights of the Ku Klux Klan says its Missouri chapter is raising money for the still unidentified white police officer who shot and killed Michael Brown, 18, who was scheduled to begin college classes this week.

“We are setting up a reward/fund for the police officer who shot this thug,” the Klan group said in an email. “He is a hero! We need more white cops who are anti-Zog and willing to put Jewish controlled black thugs in their place. Most cops are cowards and do nothing while 90% of interracial crime is black (and non-white) on white.”

In a Tuesday editorial about the case headlined “The Death of Michael Brown: Racial History Behind the Ferguson Protests,” The New York Times expressed hope that the FBI will be able “to answer the many questions surrounding the death” of the teenager” while focusing on St. Louis’ history of racial problems.

“[I]t doesn’t take a federal investigation to understand the history of racial segregation, economic inequality and overbearing law enforcement that produced so much of the tension now evident on the streets,” the editorial said. “St. Louis has long been one of the nation’s most segregated metropolitan areas, and there remains a high wall between black residents – who overwhelmingly have lower incomes – and the white power structure that dominates City Councils and police departments like the ones in Ferguson.”

Brown –– dressed in shorts and flip flops –– was reportedly shot multiple times in broad daylight after he and a friend were confronted by the officer for walking in the middle of the street in Ferguson, a predominately African American suburb of St. Louis. Police officials say Brown assaulted the officer and tried to wrestle away his gun before fleeing and being shot. At least one shot was fired in the police cruiser during the struggle, police say.

Brown’s friend, Dorian Johnson, 22, told a radically different version of events. He told reporters that he and Brown were close to their destination when confronted by the officer, who angrily told them to get out of the street. Suddenly, the friend said, the officer grabbed Brown by the neck and tried to pull him into the police car. Brown broke free and both young men began running away when Brown was struck by a bullet. He turned and raised his hands in surrender only to be shot several more times, dying where he fell.

Brown’s body lay in the street for several hours as police gathered evidence and the neighborhood’s shock turned to rage. Three days of protests, some of it violent, followed. A gas station/convenience store was burned. There was some looting. Police in riot gear fired tear gas and rubber bullets to disperse a crowd of mostly angry African Americans. But there were whites marching in some of the protests as well, holding up their hands in surrender as Brown had reportedly done, chanting, “Don’t shoot.”

The one thing everyone seems to agree on is that Brown was unarmed, a fact that prompted President Obama to call Brown’s death “heartbreaking” while urging calm. The Justice Department has begun an investigation into the killing.

The social turmoil that has erupted around Brown’s death has proven too appealing for the Klan, which in recent weeks has been quick to capitalize on a series of racially charged news events. Last week, for example, a Klan chapter in Arizona called for “corpses” in response to a feared influx of children seeking asylum as violence in Latin America forced their families to send them northward. But about St. Louis, their rhetoric has turned vile and predictable.

“We know that Michael Brown was nothing more than a punk. The media and others are painting him out to be a ‘good son’ and ‘great kid.’ The blacks of Missouri are showing their love of him by rioting, attacking and shooting people. Nothing new,” the chapter wrote on its blog.

Email requests to Imperial Wizard Chuck Murray on Wednesday were not answered.

Activists in St. Louis, however, have been focusing on calming tensions. There were two separate rallies for peace and justice held in the area Tuesday night, according to the St. Louis Post Dispatch. At one, attended by about 400 people, including a large number of local ministers, Missouri Gov. Jay Nixon told the standing-room only crowd, “Justice must not simply be pursued, but in fact achieved.”

The other rally was held by Rev. Sharpton, who told Hatewatch there were about 1,500 people in attendance at the Greater St. Mark Missionary Baptist Church just east of Ferguson. At one point, Sharpton asked for 100 young men to volunteer and join what he’s calling the Disciples of Justice –– the DJs –– “to do our own unarmed patrols.” At least 170 men signed up.

Sharpton told Hatewatch today that he has found, especially among the young black students in Ferguson, “a lot of outrage, a lot of it could have been me, a lot of, this was an execution.”

Sharpton said he was returning to New York City today to prepare for a march in the borough of Staten Island to protest the death there of Eric Garner, 43, a black father of six, who died after a white police officer applied a banned chokehold even as Garner pleaded 11 times, “I can’t breathe.”

“You cannot have racial profiling as a police strategy and not end up with this as a result in Ferguson and Staten Island,” Sharpton told Hatewatch.