Patriots don't torture: Why excusing it is an American catastrophe 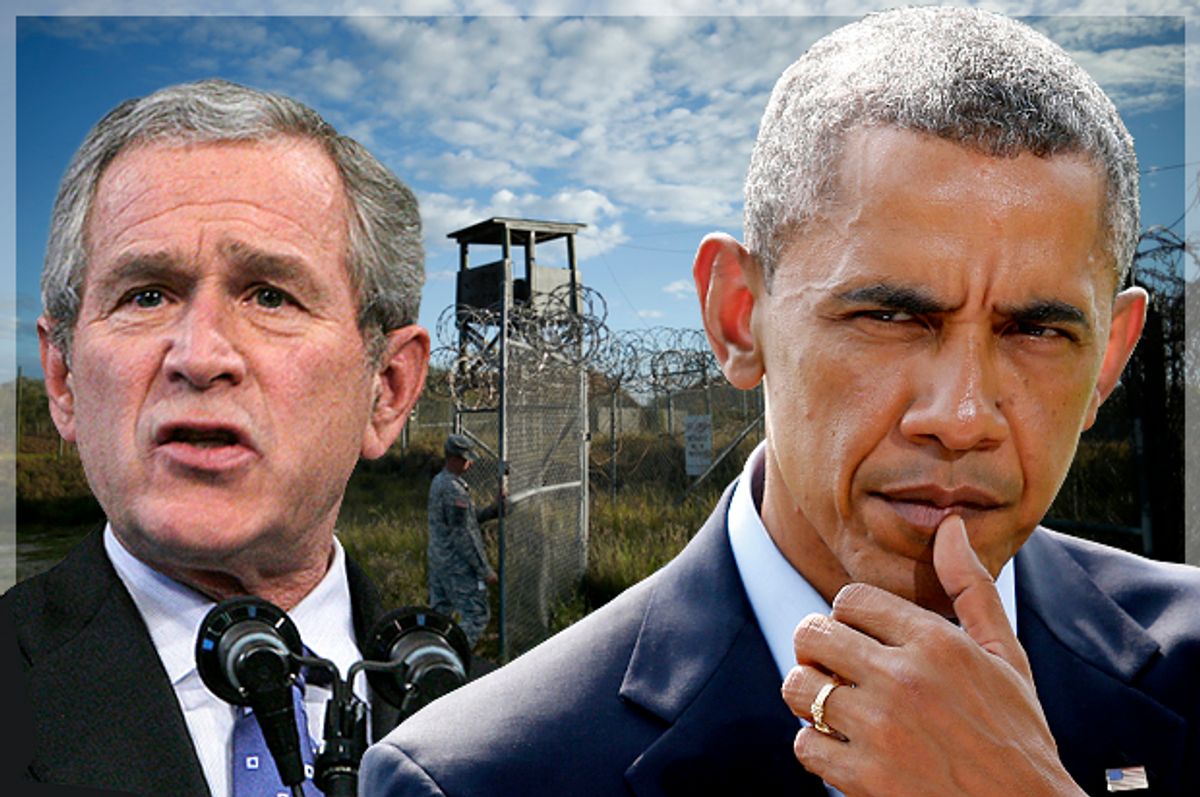 About a week ago, for the first time ever, the U.S. government, through the comments of its chief executive no less, confirmed that “folks were tortured.” Simultaneously, he observed that there "was little need for sanctimony" given the heightened fears of the American public in the wake of the 9/11 attacks and the enormous pressure that law enforcement officials were under to prevent future attacks.

The president’s official confirmation that “folks” were tortured and not just undergoing “enhanced interrogation techniques” was remarkable. His words were striking not so much because the public learned something new, but because they should have ramifications for those who designed, justified and endorsed torture as part the U.S.’s national security strategy to combat terrorism.

For those who provide the legal cover for torture, including John Yoo and Jay Bybee, there might be some fear that an official U.S. confirmation of torture will have ramifications for them. But they claim not to be afraid of prosecution. Given the soothing, exculpatory tone of the president’s remarks and Attorney General Eric Holder’s lapdoggish compliance, (despite his resolute acknowledgment in 2009 that waterboarding is torture), they have every reason to believe it.

Yet, his remarks are notably deceptive on a number of fronts. The president’s remarks suggest that torture was an accidental practice, one deployed under pressure and randomly, rather than in the way that we understand now, as intentional and systematic. In fact, we have had official confirmation of torture since at least 2004, when pictures revealed the abuses of prisoners in Abu Ghraib. We also know that the plan to engage in torture was not the result of passion and mere patriotism. Rather, it was part of a series of policies that were designed to evade the charge of torture. These plans were carried out systematically by the CIA staff under the instruction and endorsement of high-level Bush administration officials (despite their denials). The CIA had the approval, the endorsement and the “legal” architecture of a policy to conduct intentional, deliberate, systematic torture of enemy combatants.

The president’s use of the collective “we” fails to acknowledge that a deep divide was exploited between Americans and residents who were Middle Eastern, Muslim, or South Asian (MEMSAs) -- and all other Americans -- in the aftermath of 9/11. While that divide emerged on the occasion of the 19 hijackers on 9/11, it was mercilessly reinforced by President Bush, Dick Cheney, Karl Rove and political and non-Muslim religious leaders across this country. Many others, including Deepa Kumar and Arun Kundnani, have developed astute analyses of these politics elsewhere.

As a matter of accuracy and truth-telling, the president’s “we” needs to be qualified — not in terms of fear and patriotism, but in terms of the state-approved racism and xenophobia that disqualified most MEMSAs — many of them men -- from the full protection of the law and respect in the aftermath of 9/11. The president’s “we,” in addition to his generic, unqualified reference to “people” -- as in “People were afraid”; “People” did not know whether or more attacks were imminent — seduces the public into mistakenly believing that all Americans (Muslims, non-Muslims, all minorities, all progressives) were part of the “we” that called for or endorsed torture.

There is another deception in the president’s remarks: They indicate that fear is an acceptable motivation to discard principles and laws that are supposed to protect people from state-led violence, precisely during those times when passion, fear and vindictiveness seem like acceptable excuses to do otherwise. The Week’s Ryan Cooper, quoting key aspects of the 1949 Geneva Conventions, has called out POTUS for his genial yet amoral “impartial” stance on torture. That is the point of the 1949 Geneva Conventions: There are no exceptions that are acceptable for torture.

Contrary to POTUS’s statement, in the immediate days following 9/11, not all of us were afraid -- at least not of the men who were being targeted, hunted down from the jungles of American suburbia, and scapegoated for the crimes of 19 men. Many of us knew that the actions of 19 hijackers who claimed to kill in the name of Islam were not templates for all Muslims.

We knew, as we have been reminded yet again this week, that the fears of whites — especially of those in power -- are convenient excuses for political and economic exploitation, social manipulation and racism. If anything, the fear that many MEMSAs and other minorities have long had is of local and state police officers, FBI agents, CIA agents, most of them white men (and women) with enormous power and authority to make life miserable for MEMSAs -- for political gain and career development; for public assurances of security that would inevitably cost many of “our” acquaintances, friends and family members their freedom, their security, their family connections, their peace of mind, their happiness. Needless to say, many of “us”— the “us” that the president is not talking about -- knew that Muslims/South Asians/migrants of Middle Eastern descent were innocent. “We” were afraid of the potential ways in which they would wreak havoc on our lives and families.

“We” knew that 9/11 would be an opportunity to ratchet up various hostilities and associated programs of state surveillance and police overreach that had been on the back burner for months, years, even decades: from racial profiling to institutionalizing anti-Muslim hunts not just in the U.S. but internationally, in countries where such hostilities have simmered and flared up for centuries.

But POTUS’s admonition for us not to “be too sanctimonious about torture” is absolutely right: There is absolutely no need to feign indignance about torture — not when there are plenty of good reasons to be sincerely furious, profoundly outraged and loudly calling for accountability for not only the architects of torture but those who will exculpate, protect, and sympathize with the architects, the torturers, and those who complied with the instructions to torture other human beings.

There are plenty of us who are furious. And we should be — especially when “we” were among the crowd who objected to discussions of the “acceptable conditions” under which torture should take place. In short, unlike the "great civil libertarian" Alan Dershowitz, there are no conditions under which many of “us” would endorse, sanction or condone torture. Many of us, even before the Internet, knew that torture was an ineffective, inefficient method by which to obtain information.

Let’s be clear. Even without the confirmation of experts on torture (enough hiding behind the euphemism of enhanced interrogation techniques), all of “us” know that torture is a highly public signal to indicate that “some of us” in positions of leadership were endorsing violent and heinous actions as a vindication for those whose trauma manifested in bloodlust and revenge.

So when the president tells us to have mercy on the torturers and the torture architects, because “a lot of those folks were working hard under enormous pressure,” I have to wonder why he’s so willing to give these guys a break in the name of pressure or even patriotism. What does patriotism have to do with hurting people? Since when did vindictiveness in the name of patriotism become an acceptable standard for torture?

For the president to officially admit that men were tortured in the name of national security is one thing. For him to justify those actions, and attempt to induce sympathy or even exculpate those who were in charge of designing and implementing a torture program -- in the name of all Americans -- is reprehensible.