Stephin Merritt interviews Bob Stanley: "I want to understand why people like other music" 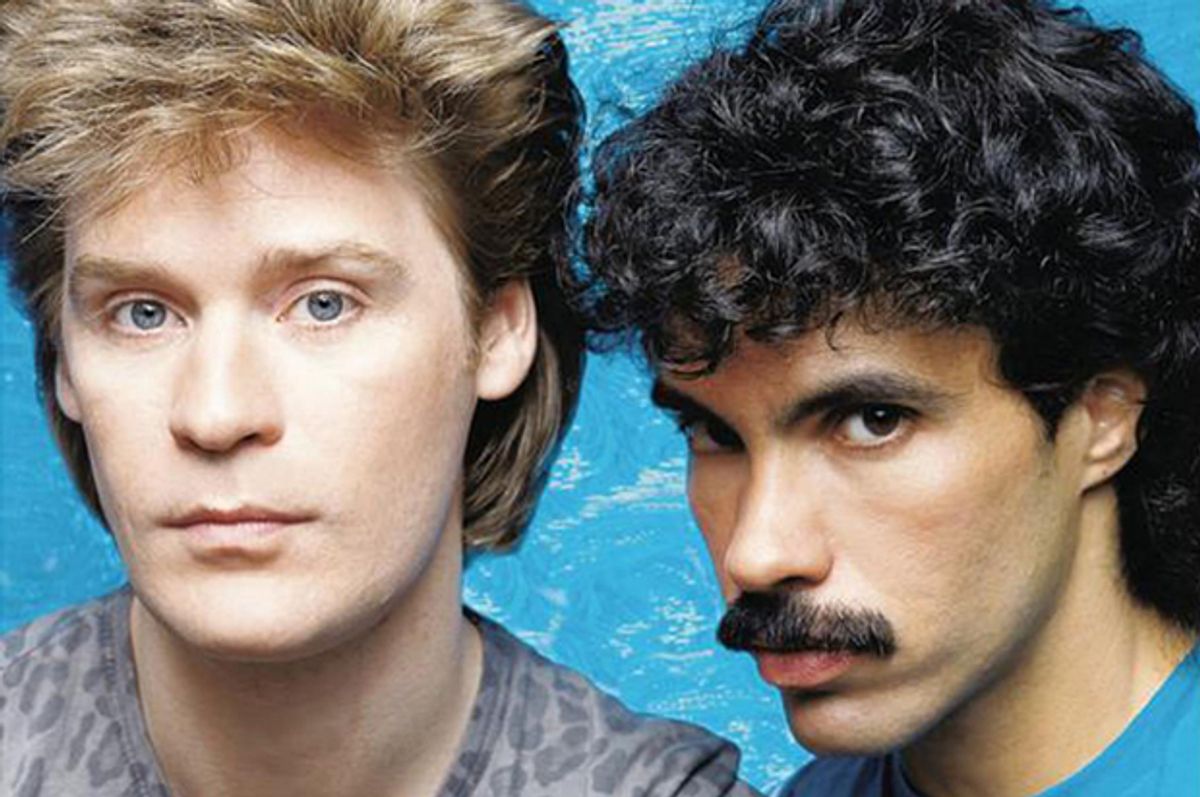 "Yeah! Yeah! Yeah!: The Story of Pop Music from Bill Haley to Beyoncé" is Bob Stanley's gleefully eclectic history of the music that brought us all together in the last half of the 20th century. Stanley is a journalist, DJ, label head and film producer most famous as one third of London's beloved "indie dance pop" band Saint Etienne, whose aesthetic of playful juxtapositions is magnified in his big, big book.

I interviewed him this week over email.

What changed for the American edition?

The UK edition has a lot of footnotes which were mostly dropped for the U.S. edition. A few names were edited out (Roy Wood and Sparks I remember noticing were absent) along with a chunk of the Glam chapter, the pre-rock early '50s chapter, and all of the Skiffle chapter -- maybe understandably. The only things I added were short pieces of Hall & Oates and Huey Lewis & the News, as the mid-'80s section seemed a little too Anglocentric. I'm very pro Hall & Oates.

Most pop books aren't 737 pages long, for some reason. How long did it take to write?

Five years on and and off, though I'd been carrying a lot of it in my head for years and years. Even at 700-plus pages I couldn't fit everyone in. Van Morrison is a little shortchanged, though I'm more annoyed with myself that I didn't include Freddie Cannon. That would have given me the opportunity to mention that "Palisades Park" was written by Chuck Barris, kind of a renaissance man in that he was a songwriter, quiz show host and alleged CIA hit man.

Pop history seen from Britain makes me long to read it from a Japanese perspective, etc. You memorably characterize most of the early British covers of U.S. rock songs as "dire." How would you characterize the initial American covers of British Invasion songs?

I know what you mean. The world reactions to rock 'n' roll and then the Beatles do fascinate me -- the Swedish beat group scene was incredibly fertile for such a small country, and it leaned towards the minor-key, melancholy side of the Kinks and the Zombies rather than the riffs of the Stones. The American covers of British Invasion songs are fairly thin on the ground, because so many of the songs were originally American! Del Shannon's "From Me to You" was, I think, the first American cover of a Beatles song, and it's, OK, a bit of a carbon copy.

American copies of the British sound are much more interesting -- The Knickerbockers' "Lies" is a pretty convincing Beatles copy, only with added U.S. sunlight and oxygen; it somehow breathes more easily than the British equivalent. British pop often sounds like it's from a small, damp island, a bit claustrophobic, playing fast to keep warm. My favorite U.S. Anglo-knockoff is "Seventeen Tears to the End" by The Liverpool Set, with very clear English diction, "Twist and Shout" backing vocals, but laid over this distorted, very American garage-fuzz production. Actually, I think they were Canadian!

You recommend a boatload of records in the book. (I ordered two Ruth Copeland albums.) Any chance of a box set?

I was planning to do one with Ace, but we ran out of time. So in the end I decided against any kind of official compilation, or playlists, as everyone will be tickled by different descriptions of songs and effectively curate their own. I'm very happy to have put you onto Ruth Copeland -- the first album, "Self Portrait," is a masterpiece, veering from funk, to light opera, to singer-songwriter ballads and soul -- with bagpipes! People say you have your whole life to write your first album, then a year to write your second. Ruth Copeland clearly condensed all 20-odd years of her life into "Self Portrait" -- it's phenomenal. I think she's still alive and living somewhere near Detroit. I don't think she's ever been interviewed.

Part of the fun of reading a music history book is spotting what has been left out. For example, I noticed you ignore the entire industrial genre. How much of that was dictated by your personal taste, which is wide-ranging but not without standards?

None of it was personal taste. I was guided by the Top 40. Anything that makes the Top 40 is pop, whether it's "Whole Lotta Love" or "The Real Slim Shady" or "Sukiyaki." The only exceptions I made were for artists who had a clear influence on Top 40 pop of the future -- the Stooges and Velvet Underground, Afrika Bambaataa, the Johnny Burnette Trio. I didn't really consider industrial -- Nine Inch Nails have always seemed too niche to be pop. I know Scott Walker loves them, and he's the definition of un-pop these days, sadly.

Of Steely Dan you write: "....people really love them. I've tried hard. I think, as with 90 percent of jazz, I might like them a lot more one day." And on boy band Westlife: "One day I may get round to appreciating their craft, but not just yet." Why do you want to like more things? I want to like fewer things, so I can spend my limited time digging into them. Do you feel you ought to, or do you just like liking things?

I want to understand why people like other music. So many people I know love Steely Dan that I feel like I must be missing something. It's not really the same story with Westlife; I can't imagine I'll ever be a fan as their stuff is so milky and predictable, but you don't have 13 UK number ones by accident. I suppose I don't like having blind spots. I tend to binge on genres -- girl groups, techno, soft rock -- and listen to nothing else until I think I've got a solid understanding of them. Currently, I'm obsessed with Belgian Popcorn, which is roughly analogous to Northern Soul, a reinvention of the past based on people's dance-floor tastes.

You mention your own delightful band Saint Etienne only in passing, and without describing them. How do you see their, and your, role in pop history?

It's almost impossible to see your place in pop history. We had a few Top 40 hits here, a couple of Billboard dance chart number ones, and I'm very happy with that! I don't know how much of an influence we've been. Personally, I'd like to hope that "Yeah Yeah Yeah" can sit on a shelf with Lilian Roxon's "Rock Encyclopedia," Dave Marsh's "The Heart of Rock And Soul" and Greil Marcus's "Mystery Train" without being shown up. Only time will tell.

You end in 2000, with the advent of file-sharing and the death of the single. If you were given a million pounds to write a sequel (YYY2), what might some of your chapter headings be?

Everybody Is a Star: X Factor and American Idol. The Rinky-Dink Panther: Nicki Minaj. Oops I Did It Again and Again: Max Martin and the New Hit Factories. Grime. Crunk. Twerk.

With the hundred million pounds profit from "Yeah Yeah Yeah 2" you are hired to revive one of the several venerable UK music media institutions that have succumbed (as you lament) in this beastly century. Which one?

The loss of "Top of the Pops" was calamitous for British pop. We've an unmatched pop TV archive which now stops dead in 2006. Clearly, it couldn't be brought back with its original format, but turning it into a successful Saturday night TV show shouldn't be beyond the BBC. Our biggest show in that slot is currently "Strictly Come Dancing," which revived an arcane '70s show based around regional ballroom dancing. Pop music, with its stars, and sex, and glamour, its heroes and its villains -- what's not to like?

Was one chapter especially difficult to write, requiring you to learn a lot of unfamiliar music or history?

The period covered by the very first chapter in the British edition, the pre-rock era of the early '50s, was entirely alien to me. It's still largely undocumented. Someone like Frankie Laine, in particular, is a very underrated figure -- I can hear echoes of Frankie in Joe Meek,  Nick Cave, the "Twin Peaks" soundtrack, he's all over the place. And I'm now very fond of Guy Mitchell, Teresa Brewer and Britain's Eddie Calvert -- the Man with the Golden Trumpet. It's a period full of novelty and bonhomie.

With the Magnetic Fields, Stephin Merritt has written, produced, and recorded ten albums, including 69 Love Songs, which was named one of the 500 best albums of all time by Rolling Stone. Merritt has performed as part of Lincoln Center’s “American Songwriters” series and at BAM’s “Next Wave of Song,” and he has composed the score for the Academy Award–nominated film Pieces of April and for Eban and Charley.