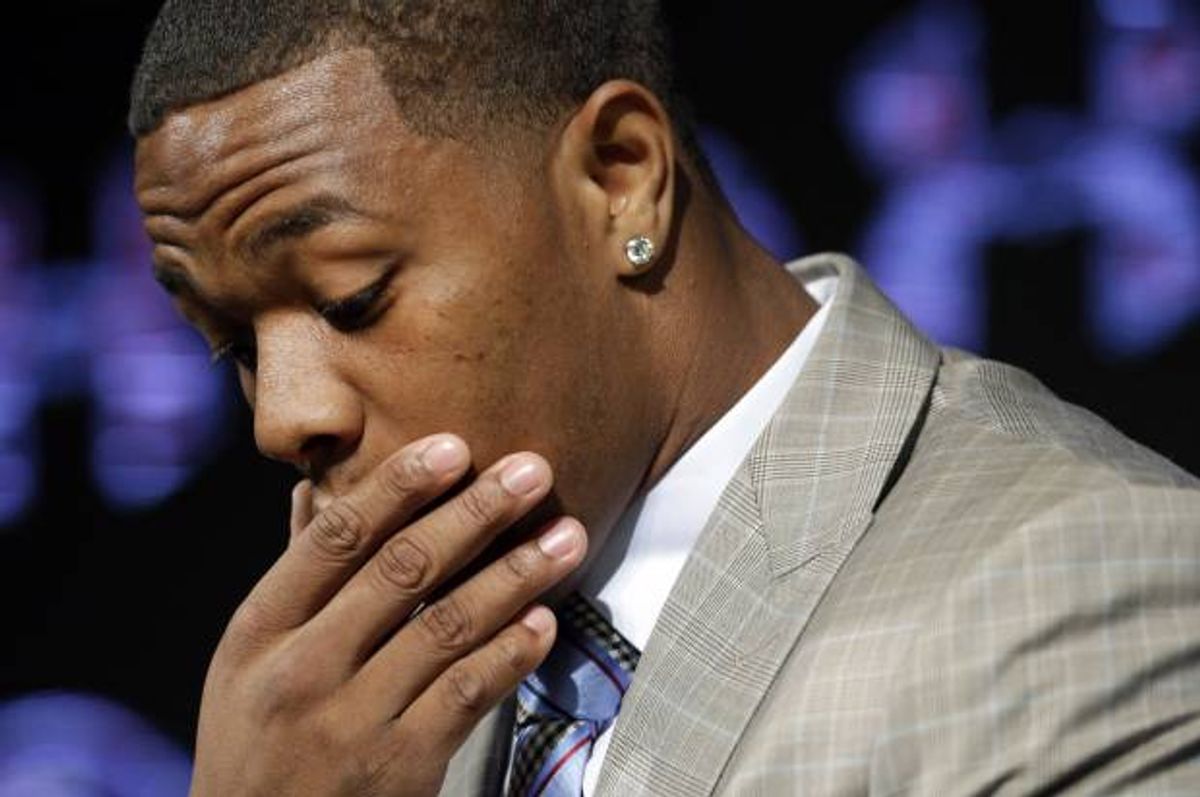 If I had a dollar for every time I’ve been asked this question, I could put myself through college again. But it’s par for the course, I guess, when you’re a female Steelers fan.

I’ve navigated through the sea of “Rapistberger” jokes that burned my ears after multiple allegations. And a year after writing about them, I’ve cemented my position that Big Ben should no longer be playing for the Steelers, and since retired his jersey to the back of my closet in favor of men like Joe Greene and Hines Ward who have represented the team in a positive way. Last summer I watched as 49er Ahmad Brooks, released from the Bengals in 2008 following an incident where he punched a woman in the face, allegedly went on to assault teammate Lamar Divens, but was not charged as Divens decided “it would be bad for both their careers.” Now the Ray Rice spectacle — and accompanying video evidence — unfolds before my eyes, and Roger Goodell answers with a two-game suspension. To be clear, that is two games less than Odell Thurman received for failing to show up for a drug test in 2006. Thirteen games less than Browns receiver Josh Gordon’s punishment for smoking some grass.

I’m tired of supporting a league that does not support its female fan base. And I’m not alone. Lifelong Bengals fan Lisa Schare Johnson recently addressed an open letter to the NFL on why she will no longer be attending games, buying merchandise, or otherwise supporting an organization whose commissioner refuses to condemn domestic violence:

I have griped and grumbled while watching the evolution of the cheerleading uniform until it’s virtually non-existent — proving that NFL “cheerleading” isn’t really much about cheering, but more about the objectification of young women on the sideline. I have been horrified at the racism allowed to occur in the locker rooms and dismayed at the slow response to the detrimental long-term effects of sustained head injuries. However, this last decision has officially done me in as a fan.

While I applaud Lisa for her letter and decision not to put any more money in Goodell’s pocket, hers is a choice that no female fan – or any fan who condones violence against women — should have to make.

As it was for Lisa, football was an integral part of my upbringing and sense of family. We lived, breathed, and bled black and gold in an area populated by disgruntled ex-Colts fans who would later don purple and propagate the fiercest divisional rivalry the NFL had ever seen. My favorite present on Christmas Day 1997 was a Kordell Stewart jersey, which, though it swallowed my bony ten year old frame, I happily wore every Sunday for the remainder of the season.

But 2008 was the year that took me from admiration to total immersion. My friend Eric had broken his foot in late August and would be laid up for the duration of football season. I kept him company on lazy Sunday afternoons and through his pain, he patiently and diligently taught me the names of plays, positions, and penalties until I felt like a certified expert. What had been mere appreciation had developed into an understanding of the intricate ins and outs that would make that year’s Super Bowl win all the sweeter.

If I were to hop in a time machine and revisit that little girl, swimming in her Slash jersey, what could I tell her about the NFL today? That it’s run by a commissioner who doles out stricter punishments for lighting up a doobie than for beating a woman. That one day she’ll have friends who run into Ray Rice at a local mall and smile for pictures with him, days after a video of him dragging his unconscious wife out of an elevator goes public. That her father will walk into a middle school, as he did last week, and see a cutout of the “role model” running back propped up in a cafeteria full of preteens who, someday, want to play just like him.

What about him? And what about James Harrison and Ray Rice and Jovan Belcher? Trent Mays and Ma’lik Richmond, the “very good students” from Steubenville High School? Elliot Rodger and the shootings in Santa Barbara? For every violent act rooted in misogyny, there is a mass outcry of what could we have done? followed by a distinct failure to learn from history. Instead, we diminish victims’ testimonies and excuse the perpetrators as special cases, bemoaning their “promising futures” cut short by jail time. We regurgitate phrases like, “everyone should be very careful in what they say,” and “we don’t know what happened before the video” in order to deflect, to distance ourselves from an inconvenient truth. It’s the cultural equivalent of staring at an open wound in one hand, holding a rag in the other, and wondering how to stop the bleeding.

As per Keith Olbermann:

The message to the women who the league claims constitute 50 percent of its fanbase is simple. The NFL wants your money. It will do nothing else for you. It will tolerate those who abuse you verbally and those who abuse you physically. And its elder statesmen will talk about the media distractions that could ensue because one of the NFL’s gay active players has finally self- identified, without saying a word about the media distractions that could ensue because a star player has knocked out his wife.

As an American consumer, I have every right to boycott the NFL, to withdraw the only means of communication — money — that Roger Goodell apparently understands. But I shouldn’t have to sacrifice a part of my identity that, like womanhood, is central to who I am. There is, however, a moral imperative to use public persona and influence as tools for positive change, rather than prattle on about the way it’s always been. With great power comes great responsibility. It’s time that Goodell, as high priest of the wealthiest professional sports league in the world, exercises his.