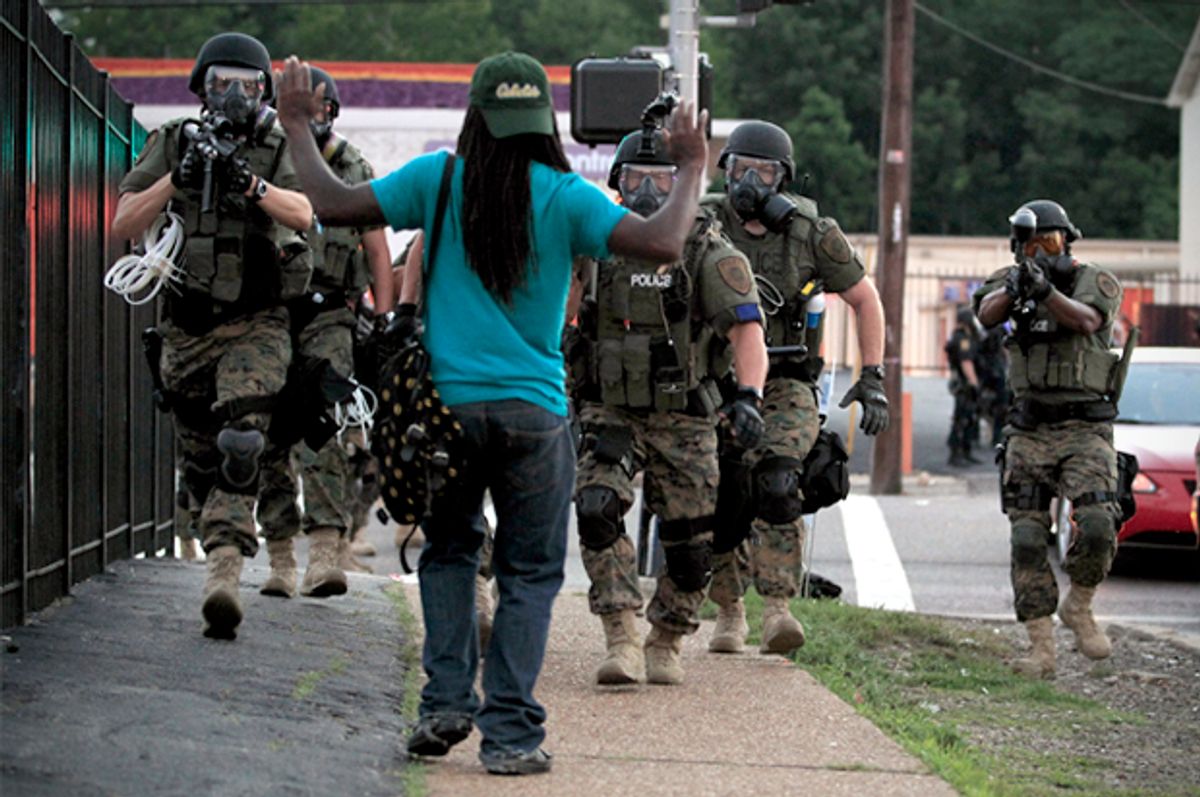 On Aug. 12, 2013, a federal court in New York found that the NYPD’s use of the stop-and-frisk practice was unconstitutional racial profiling. Almost one year to the day later, police gunned down Michael Brown — an 18-year-old, unarmed black man — during a street stop in Missouri. Don’t miss the connection, or the cycle of government violence against black Americans might never end.

Michael Brown’s death at the hands of police comes at a time when black people in Missouri have faced increased targeting by the police. The editorial board of the St. Louis Post Dispatch reported last week that black drivers in Missouri were 66 percent more likely than whites to be stopped by the police in 2013 -- a dramatic increase from 2000, when black people were only 30 percent more likely to be stopped. Black and Latino people were also more likely than whites to be searched.

I was a senior attorney on Floyd v. the City of New York, the class action that proved the NYPD purposefully targeted its stop-and-frisk practice at blacks and Latinos based on their race. And these numbers sound awfully familiar to me.

Between January 2004 and June 2012, the NYPD conducted more than 4.4 million stops. Only 12 percent of the 4.4 million stops resulted in arrest or summons. In 88 percent of 4.4 million stops, no law enforcement action was taken at all. In 52 percent of all stops – more than half the time – a frisk was also conducted. A weapon was found in only 1.5 percent of those frisks. That is, in millions of frisks that officers conducted – when they were supposed to be looking for weapons and they were supposed to have good reason to be looking for weapons – there was no weapon. The vast majority of the time the NYPD stopped or frisked someone, that person was not doing anything unlawful and had no weapon.

And the NYPD was not stopping and frisking everyone. Over 80 percent of the people the NYPD stopped were black or Latino. Only 10 percent were white. Black and Latino people were more likely to be stopped even after controlling for all other factors, including crime and poverty rates. Let me simplify that: Higher crime rates in mostly minority neighborhoods did not explain the racial disparity in the stops the NYPD was conducting.

The NYPD also dispensed force differently depending on race. Between 2004 and 2009, blacks and Latinos were, respectively, 14 percent and 9 percent more likely than whites to be subjected to force by police during a stop.

The Floyd trial went on for nine weeks in the spring of 2013. More than 100 witnesses testified. Among them were many black men who spoke of encounters that are disturbingly similar to the encounter that ended Michael Brown’s life.

It was a Saturday evening, and Devin was walking to meet his older brother at a bodega within blocks of his Harlem apartment, when suddenly a police vehicle pulled up in front of him. Two officers jumped out and yelled at him to stop. One grabbed Devin’s arm and threw him face first onto the car’s hood. The officers pinned Devin there, holding his arms behind his back, handcuffing him, and rubbing their hands up each of his legs, over his body, and down each arm.

Devin was terrified, and helplessly asked, “What is going on? What did I do? I am just a kid.” The officers did not respond. They demanded to know his age. He told them: 13. They accused him of lying. See, they didn’t believe him, because Devin was a tall kid. Just like Michael.

The officers threw Devin in the back of the police cruiser and took him to the police station. On the way, he started to cry. The officer sitting beside him ridiculed him. “Stop crying like a little girl,” he said. And what had Devin done to deserve this treatment? The officers testified they suspected Devin had a gun. But why? What had he done to seem like someone with a gun? He jaywalked, the officers testified.

Now, if you have ever been to New York City, you know that jaywalking is pretty common. What else? There had been, 20 minutes earlier, a report of an unruly group of 40 teenagers, the officers testified. OK, but Devin was alone. Jaywalking alone while black.

And, like almost all of the 2.3 million other (mostly black) people frisked by the NYPD, Devin in fact had no weapon.

Do not take the bait, now being peddled by the Missouri police to cover their tracks, that Brown was approached because he matched a suspect description. In New York, the NYPD instructed officers to stop the "right people," even if they did nothing to appear suspicious. And who were those "right people"? According to Joseph Esposito, the NYPD chief who retired only days before testifying at the Floyd trial: "young men of color in their late teens, early twenties.” Or, as Raymond Kelly, the former NYPD commissioner, put it: The police targeted black and Latino men “to instill a fear in them, every time they leave their home, they could be stopped by the police.”

It has now been a year since the federal court in Manhattan found that New York’s stop-and-frisk practice violated the constitutional rights of thousands of blacks and Latinos. It has been a year since that court ordered the NYPD to change its racially targeted practice.

Yet those thousands of people have received no relief from the NYPD’s unconstitutional practice because the reforms were put on hold last fall, at the request of Michael Bloomberg, the outgoing New York City mayor. In November, the citizens of New York voted by a landslide majority to elect Bill de Blasio, who promised to withdraw the appeal and start the change as the new mayor. The Floyd plaintiffs and the city, under Mayor de Blasio’s leadership, recently—finally—asked to withdraw the appeal and move forward with reforms. But on August 8, 2014, the NYPD unions submitted their own motion, opposing withdrawal of the appeal.

So, at the same time that police in Missouri were fatally shooting Michael Brown for being black and jaywalking, the NYPD unions were asking a federal appellate court to keep the hold on stop and frisk reforms in place. They are asking the appellate court to let them continue the appeal -- to allow this racially targeted police practice to continue.

Now, a year after the city of New York was found to have violated the Constitution, no change has come to the stop-and-frisk program. It has been eight months since the mayor was elected on a promise to remedy the stop-and-frisk practice, and the change has not come. In the meantime: Michael Brown, shot and killed by Ferguson police while walking on the streets in his own neighborhood; Ezell Ford, shot and killed by Los Angeles police while lying on the ground and complying with orders; Eric Garner, strangled to death by New York City police over some loose cigarettes.

Police departments across the country are watching the stop-and-frisk case to see their own limits. The delay of change in New York sends a message to other departments that it’s OK to treat young black men like criminals. Perhaps because the change in New York has been delayed, the police in Missouri felt emboldened to ignore the most fundamental rights of an innocent black man.

But this does not have to continue. The federal appellate court in New York can let its city get on with ending the NYPD’s racially targeted stop-and-frisk practice and set a better trend in other police departments. It could deny the police unions’ request and let the reforms begin.

The lives of black Americans depend on it.