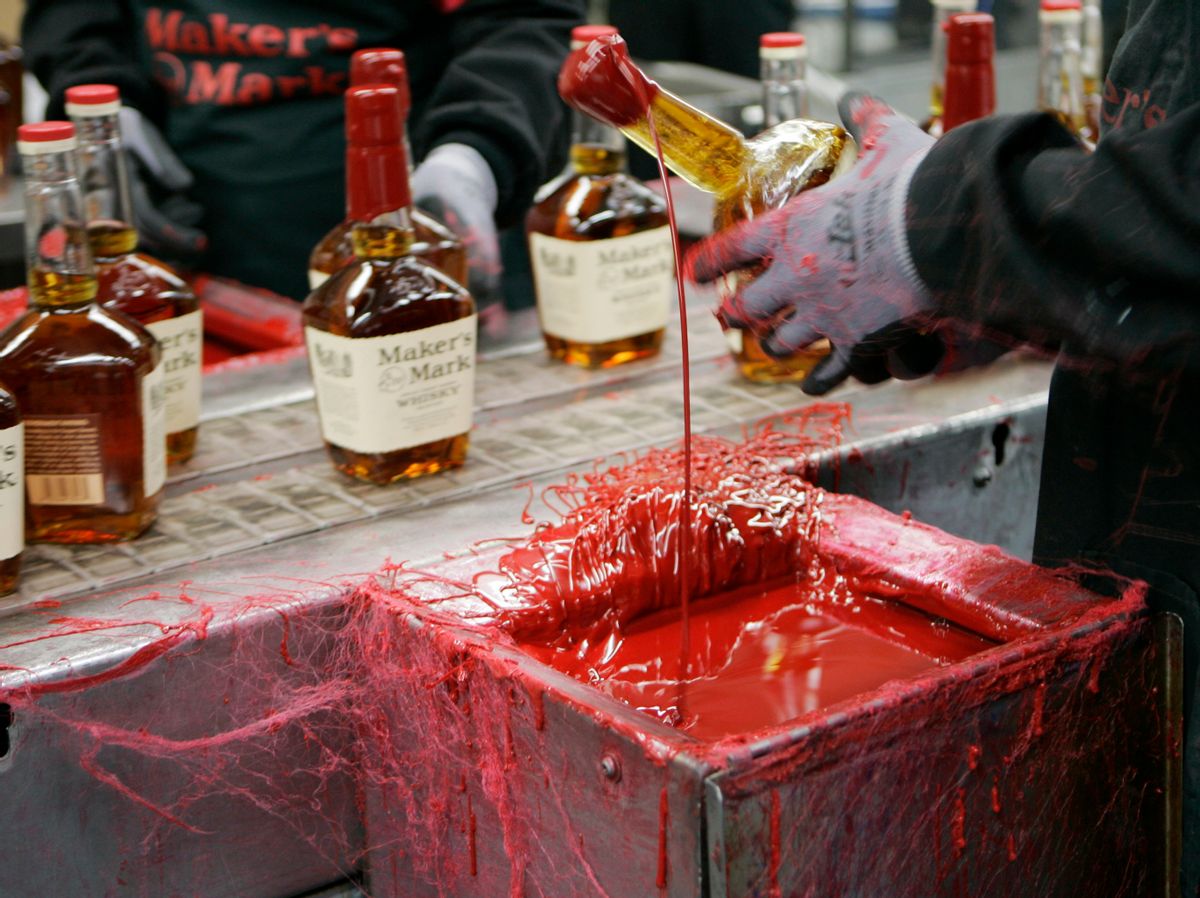 FILE - In this Wednesday, April 8, 2009, file photo, a bottle of Maker's Mark bourbon is dipped in red wax during a tour of the distillery in Loretto, Ky. Kentucky bourbon makers have stashed away their largest stockpiles in more than a generation due to resurgent demand for the venerable brown spirit. (AP Photo/Ed Reinke, File) (AP)
--

LOUISVILLE, Kentucky (AP) — Kentucky bourbon makers are making a big bet by stashing away their largest stockpiles in more than a generation.

To put it in bartenders' lingo: Distillers are putting up the tab for millions of rounds of bourbon years before they are even ordered. The production poses an inherent risk, but hitting the moment right — a big supply meshing with big demand — could mean a serious payday for companies big and small.

Missing the target would leave bourbon makers awash with supply and leave future production in question, particularly for craft distilleries that have seen a surge in popularity.

"People keep asking us, 'When will the bubble burst?'" said Eric Gregory, president of the Kentucky Distillers' Association.

For most in the business, the answer is not anytime soon.

Large companies are banking on continued international demand from places such as China and a culture in the U.S. that currently has a taste for bourbon, which has to be aged at least two years in new charred oak barrels.

"We are busier than I ever could have imagined," said Chris Morris, master distiller at Brown-Forman Corp., producer of Woodford Reserve and Old Forester bourbons.

Last year, Kentucky distilleries filled 1.2 million barrels of bourbon — the most since 1970, according to the Kentucky Distillers' Association. Inventory has topped 5 million barrels for the first time since 1977, the group said.

Production has surged by more than 150 percent in the past 15 years in Kentucky — home to 95 percent of the world's bourbon production.

The last time the industry spiked production in the 1970s, distillers ended up with a glut when demand went in a tailspin.

Back then, the industry had grown stale and many consumers switched allegiance to vodka, Scotch and other spirits.

"You had the same old brands, you were pretty much on autopilot," Morris said.

Now, distillers are constantly dabbling with premium small-batch offerings or putting new twists on recipes and flavors and companies are looking to real-time data from the digital world.

Sales trends and developments are tracked in markets worldwide. The numbers are crunched to make the best educated estimate of future consumer demand for a product that takes years to mature.

Straight bourbon whiskey ages a minimum of two years, though the average maturity is four years or older. Many popular super-premium brands age six years or longer, which are the toughest to stock in bars, restaurants and liquor stores.

"Bourbon as a category is on fire," said Bill Thomas, a Washington, D.C., bar owner whose establishments include Jack Rose Dining Saloon. "Every week, there's stuff that's out of stock."

Every drop of bourbon is precious for producers trying to keep up with demand.

"If they had more, they could sell it right now," said Fred Noe, Jim Beam's master distiller and descendant of Jacob Beam, who set up his first Kentucky still in 1795.

The disparity between supply and demand has put extra pressure on the distilleries.

In early 2013, Maker's Mark caused a backlash when it announced it was cutting the amount of alcohol in each bottle to stretch its whiskey supplies. The brand known for its red wax seal quickly scrapped the idea.

In the U.S., total revenues for bourbon and Tennessee whiskey reached $2.4 billion last year, a 10.2 percent increase, according to the Distilled Spirits Council. Volume was up nearly 7 percent to 18 million cases, it said.

The two spirits claimed 34 percent of the U.S. whiskey market in 2013, putting it ahead of the Canadian, Scotch, blended and Irish whiskey categories.

The industry lumps bourbon and Tennessee whiskey into one category. Both are produced in the same way with similar ingredients, but Tennessee whiskeys are charcoal mellowed before going into the barrel to age, while bourbon isn't.

Exports of bourbon and Tennessee whiskey surpassed $1 billion for the first time ever in 2013, the council said.

"It's never been like this in my lifetime," said Bill Samuels Jr., who retired after a long career as the top executive at Maker's Mark, the brand started by his parents. "It doesn't feel like a fad. It feels like a legitimate trend."