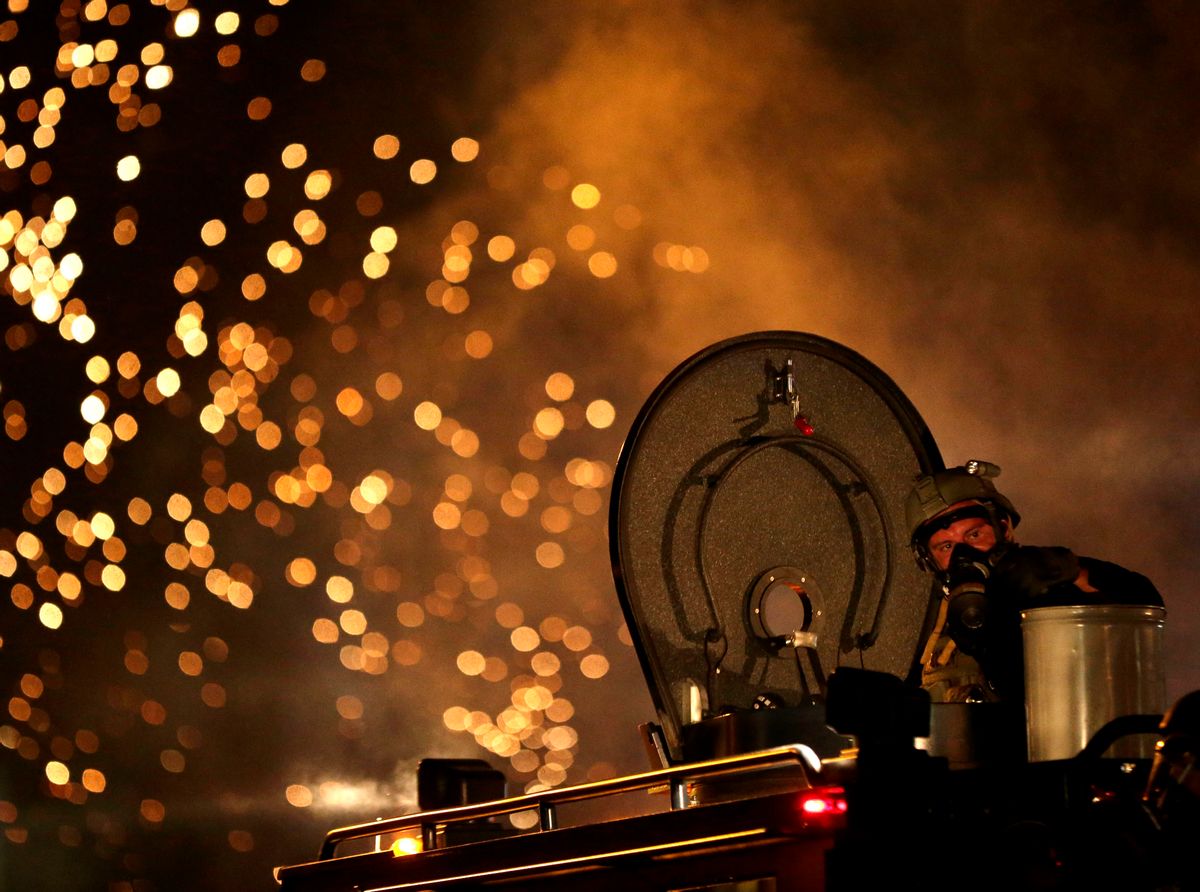 A law enforcement officer on a tactical vehicle watches after a device was fired to disperse a crowd Sunday, Aug. 17, 2014, during a protest for Michael Brown, who was killed by a police officer last Saturday in Ferguson, Mo. As night fell Sunday in Ferguson, another peaceful protest quickly deteriorated after marchers pushed toward one end of a street. Police attempted to push them back by firing tear gas and shouting over a bullhorn that the protest was no longer peaceful. (AP Photo/Charlie Riedel) (AP)
--

FERGUSON, Mo. (AP) — Missouri's governor on Monday ordered the National Guard to a St. Louis suburb convulsed by protests over the fatal shooting of an unarmed black teen, after a night in which police used tear gas to clear protesters off the streets well ahead of a curfew.

Gov. Jay Nixon said the National Guard would help "in restoring peace and order" to Ferguson, where protests over the killing of 18-year-old Michael Brown by a white police officer entered their second week. Police said they acted in response to gunfire, looting, vandalism and protesters who hurled Molotov cocktails.

"These violent acts are a disservice to the family of Michael Brown and his memory and to the people of this community who yearn for justice to be served and to feel safe in their own homes," Nixon said in a statement.

The latest confrontations came on the same day that Attorney General Eric Holder ordered a federal medical examiner to perform another autopsy on Brown, and as a preliminary private autopsy reported by The New York Times found that Brown was shot at least six times, including twice in the head.

As night fell in Ferguson Sunday, another peaceful protest quickly deteriorated and the streets were empty well before the midnight curfew.

"Based on the conditions, I had no alternative but to elevate the level of response," said Capt. Ron Johnson of the Missouri Highway Patrol, who is command in Ferguson. At least two people were wounded in shootings, he said.

The "extraordinary circumstances" surrounding Brown's death and a request by his family prompted the Justice Department's decision to conduct a third autopsy, agency spokesman Brian Fallon said in a statement. The examination was to take place as soon as possible, Fallon said.

The results of a state-performed autopsy would be taken into account along with the federal examination in the Justice Department investigation, Fallon said.

Dr. Michael Baden, a former New York City chief medical examiner, told The New York Times that one of the bullets entered the top of Brown's skull, suggesting that his head was bent forward when he suffered a fatal injury.

Brown was also shot four times in the right arm, and all the bullets were fired into his front, Baden said.

The Justice Department already had deepened its civil rights investigation into the shooting. A day earlier, officials said 40 FBI agents were going door-to-door gathering information in the Ferguson neighborhood where Brown was shot to death Aug. 9.

Federal authorities also want to calm any public fears that no action will be taken on the case, Weinstein said.

Police have said little about the encounter between Brown and the officer, except to say that it involved a scuffle in which the officer was injured and Brown was shot. Witnesses say the teenager had his hands in the air as the officer fired multiple rounds.

Sunday's clashes in Ferguson erupted three hours before the curfew imposed by Nixon. Officers in riot gear ordered all the protesters to disperse, and many did, but about 100 stood about two blocks away until getting hit by another volley of tear gas.

Protesters laid a line of cinder blocks across the street in an apparent attempt to block police vehicles, which easily plowed through. Someone set a trash bin on fire, and the crackle of gunfire could be heard from several blocks away.

Within two hours, most people had been cleared off West Florissant Avenue, one of the community's main thoroughfares. The streets remained quiet as the curfew began. It was to remain in effect until 5 a.m.

Earlier in the day, Johnson said he had met members of Brown's family and the experience "brought tears to my eyes and shame to my heart."

"When this is over," he told the crowd, "I'm going to go in my son's room. My black son, who wears his pants sagging, who wears his hat cocked to the side, got tattoos on his arms, but that's my baby."

Johnson added: "We all need to thank the Browns for Michael. Because Michael's going to make it better for our sons to be better black men."

The protests have been going on since Brown's death heightened racial tensions between the predominantly black community and the mostly white Ferguson Police Department, leading to several run-ins between police and protesters and prompting Nixon to put the state highway patrol in charge of security.

Ferguson police waited six days to publicly reveal the name of the officer and documents alleging Brown robbed a convenience store shortly before he was killed. Police Chief Thomas Jackson said the officer did not know Brown was a robbery suspect when he encountered him walking in the street with a friend.

The officer who shot Brown has been identified as Darren Wilson, a six-year police veteran who had no previous complaints against him. Wilson has been on paid administrative leave since the shooting, and the department has refused to comment on his whereabouts. Associated Press reporters have been unable to contact him at any addresses or phone numbers listed under that name in the St. Louis area.