More Fergusons are coming: Why paramilitary hysteria is dooming America

It's time for officials to stop feigning surprise at what's happening in Missouri. They've created a total monster 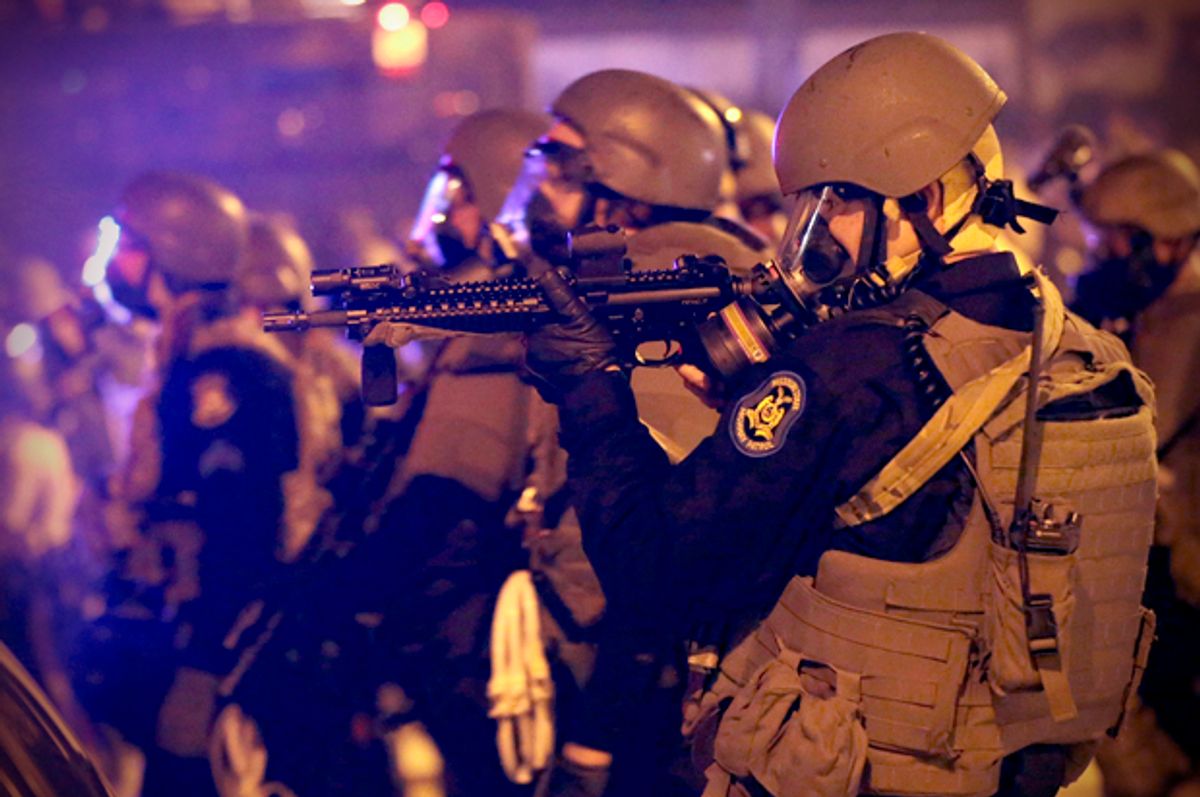 Over the weekend, Missouri Gov. Jay Nixon declared a state of emergency in Ferguson and imposed a curfew. Once again tear gas filled the night air. Now the National Guard has been called out.

We will never know how differently things would have played out if the official reaction from the start of the unrest had been the more community-engaged response led by Capt. Ron Johnson of the Missouri State Highway Patrol (Plan B) and not the authoritarian doubling down of the locals. All too often an initial oppressive response by authority to long-simmering resentments and alienation sets in motion a cycle of violence that develops its own momentum. (See Newark, June 1967.) At that point you're on your way to alienated narratives that are much harder to reconcile.

Local officials were just oblivious to the level of mistrust present in Ferguson when their first response was paramilitary, as depicted in the front page New York Times photo of police looking more like U.S. Marines protecting the Green Zone in Baghdad, than a civilian police force.

What is still hard to reconcile is the strong disdain expressed by high-ranking federal officials for the military response by the local authorities to quell protests over the police shooting of  yet another unarmed black man. President Barack Obama, Attorney General Eric Holder and Sens. Rand Paul and Claire McCaskill expressed alarm over how the Ferguson police, in full battle regalia, made the city appear like a war zone, implying genuine surprise over the degree to which America’s local policing had become militarized.

What is truly disassociative about their response is that the federal government has been driving this trend for decades.

Long before the Sept. 11 attack, the federal government was funneling hundreds of millions of dollars into local and state law enforcement for them to outfit themselves with military hardware and battlefield gear. These days there is no more vivid display of this troubling trend than when the host cities to the Democratic and Republican conventions race out to spend the $50 million they all get from Uncle Sam so they can get the latest in crowd suppression gear, even their own armored personnel carriers.

The concept of the local police SWAT teams (special weapons and tactics) with their military-style uniforms and equipment can be traced back to law enforcement’s response to the civil unrest of the late 1960s and the emergence of armed fringe groups like the Symbionese Liberation Army in the 1970s.

With the federal declaration of the so-called war on drugs that followed, local SWAT teams proliferated. In 1997 in the first national survey of the trend professors Peter Kraska and Victor Kappeler from Eastern Kentucky University looked at close to 700 local police departments for towns with at least 50,000 residents. In the 1980s they found that just 60 percent of these communities had the paramilitary SWAT units. By the 1990s it was closer to 90 percent. It’s probably a lot closer to 100 percent now.

Over time, the use of these units went from the rare hostage or mass shooter events to their regular deployment to execute “no knock” warrants on suspected drug dealers, with flash grenades and battering rams. Washington’s  “war on drugs” rhetoric provided a ready rationale for a growing army of these specially trained boots on the ground who were now regularly training with combat weapons and honing their military  tactics. For places where this happens regularly, the neighborhoods take on the vibe of an occupied territory.

“The ideological filter  encased within the war metaphor is “militarism” defined as a set of beliefs and values that stress the use of force and domination as appropriate means to solve problems and gain political power, while glorifying the tools to accomplish this — military power hardware and technology,” wrote Kraska and Kappeler.

As documented in a recently released research report by the American Civil Liberties Union, this increased militarism of the local police departments across our nation has had tragic consequences for innocent civilians killed and wounded in the wake of “no knock” raids that go bad.

Throughout the ACLU’s “War Comes Home -- The Excessive Militarization of American Policing” are accounts of SWAT team fiascoes like the death of 68-year-old Eurie Stamps. Back in January of 2011, Stamps, a grandfather of 12, was sitting at home one night in his pajamas watching a ballgame. When a Framingham, Massachusetts, SWAT team burst into his home he complied with police instructions and dropped to the floor facedown when an officer’s gun accidentally discharged, killing Stamp on the spot.

Local police had been looking for Stamps’ 20-year-old step son, who did not live at the address of the raid. The ACLU reports his stepson had actually been apprehended minutes before the raid.

The ACLU survey looks at the SWAT team activities in 260 law enforcement agencies located in 26 states and the District of Columbia.  What the civil liberties group found was that 61 percent of the people caught up in these paramilitary raids were people of color. Seventy-nine percent of the SWAT team deployments were not for the mass shooter or hostage event type of scenario they were originally created to deal with but for executing search warrants related to the war on drugs. In the majority of deployments they surveyed “the police did not face genuine threats to their safety and security,” the ACLU concluded.

“There is no need for police officers to be in combat gear because it puts them in a combat state of mind,” says Nick Casale, former NYPD gold shield detective and former director of counterterrorism for New York City’s Metropolitan Transit Agency. “The police department’s mission is to police their fellow citizens. The public should never be considered enemy combatants and when police put on military uniforms they begin to see them that way.”

Casale says the wearing of camouflage and other military-issue-style dress by local police, as well as the municipal deployment of military-style armored rolling stock,  should be prohibited. “If you are going to have a vehicle with those all terrain capabilities it must be painted the same color as the rest of the marked municipal first responder fleet.”

Casale traces the origins of the SWAT team paramilitary concept to the FBI SWAT teams, which he says were emulated by state, county and local police agencies. “Mr. Holder has it all wrong. The originators of this quasi-combat style for civilian law enforcement missions started with the FBI,” Casale says. “Little brother always follows what big brother does.”

This militarization of the police and domestic security function is not just evident on the mean streets where the war on drugs is waged every day. The public is subjected to the same  military force projection at so-called National Special Security Events like the inauguration of our president and the nominating conventions held by the Democratic and the Republican Parties.

Back in May of 1998, then-President Bill Clinton signed Presidential Decision Directive 62 - Protection Against Unconventional Threats to the Homeland and Americans Overseas. According to a historical analysis done by the Congressional Research Service, PDD 62 established that it would be up to the president to decide which events should be declared as National Special Security Events. Such a declaration would ensure that the U.S. Secret Service would see to it that event planners “addressed terrorist apprehension, prosecution, increased transportation security, enhanced emergency response and enhanced cyber security.”

As a reporter covering the conventions since, I have watched the paramilitary presence grow exponentially even as the volume of protests and protesters has dropped off. The convention security perimeters are gauntlets that make it impossible to move freely between the protest activity and the main official events. Reporters have to make a decision at the start of each day's proceedings which location they want to report from.

At the 2004 Republican convention in New York City, hundreds of thousands of antiwar protesters staged one of the largest demonstrations in American history. But during the convention week, hundreds were subjected to mass arrest, fingerprinting and prolonged detention. Subsequently, a federal judge found that the NYPD’s tactics were unconstitutional. Earlier this year the City of New York paid $18 million to settle a lawsuit brought by the New York Civil Liberties Union for the 2004 arrest, detention and fingerprinting of hundreds of protesters, journalists and bystanders.

Just as we have seen law-abiding Americans caught up in no-knock drug raids, we have seen people who were merely exercising their First Amendment rights at our political conventions viewed by police as potential terrorism suspects. “We saw the city in court try to justify  these mass arrests with a terrorist threat,” recalls Chris Dunn, senior counsel with the NYCLU.  “Equating protest with terrorism feeds into talking about a justification that has nothing to do with protest. That’s wrong and dangerous. As soon as you invoke terrorism the rules change.”

By the 2012 Republican convention in Tampa, Florida, the ratio of law enforcement paramilitary forces to actual protesters, whose numbers had dropped off to dozens in the wake of Hurricane Isaac, was 10 or 20 to 1, with ever-present police helicopters hovering overhead.

I can’t wait to see just what the powers that be have in mind for 2016.