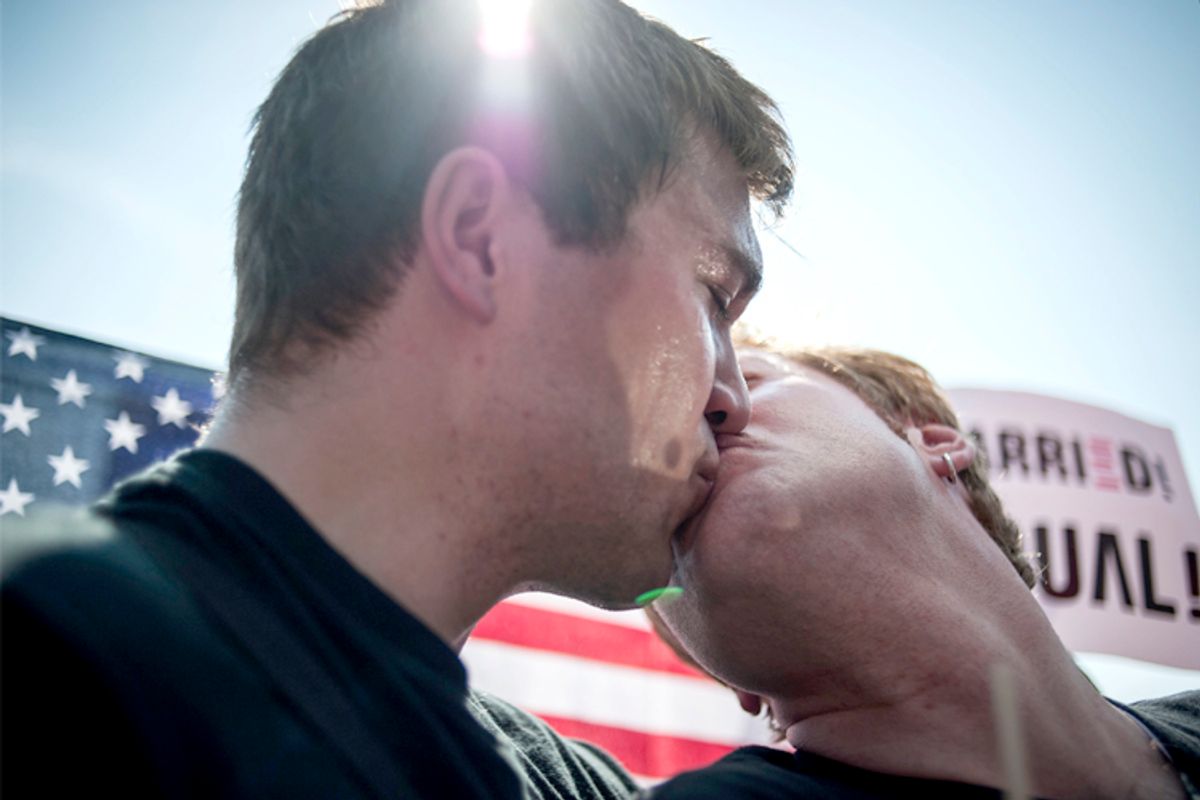 Michael Knaapen (L) and his husband John Becker, both of Wisconsin, react to the 5-4 ruling striking down as unconstitutional the Defense of Marriage Act at the U.S. Supreme Court in Washington June 26, 2013. (Reuters/James Lawler Duggan)
--

Researchers have found one more incomplete and unsatisfying explanation for why LGBT people don't have equal rights: Non-LGBT people just don't think same-sex couples are "as in love" as heterosexual ones. A study out of Indiana University found that sexual orientation weighs heavily on how loving couples are perceived to be by other people, who tend to place opposite-sex partnerships on a pedestal. This perception, in turn, affects how many formal and informal rights LGBT couples "deserve" as far as the general public is concerned, according to study author Long Doan.

Doan and his colleagues, Annalise Loehr and Lisa R. Miller, tested their hypothesis by providing participants with the exact same story -- a romance -- that featured one couple. For each participant, the couples' names were randomly changed and clearly gendered, to imply that some couples were heterosexual and others homosexual. The researchers found that respondents reacted quite differently to each type of couple: Participants essentially ranked the amount of love partners had for one another hierarchically by sexual orientation, with opposite-sex couples being perceived as "most in love," followed by same-sex female couples and then same-sex male couples.

Interestingly -- and perhaps most upsettingly -- participants noted that couples who were believed to be most in love deserved more rights than others, from the right to hold hands in public to the right to marry. The researchers suggest that this could have huge implications for the same-sex marriage movement; the findings basically provide a road map to slowly convincing the public that LGBT couples deserve to be treated equally. It's just too bad (to say the absolute least) that sociologists even need to provide a "best practices" guide to convincing one group of people of another group's humanity, or their ability to love. Apparently, though, it's incredibly helpful to remind everyone that we all love the same (and that loving the same means loving the way straight people do, because that's the best, holiest kind of love!).

"There's a lot of focus on portraying gay couples as just as loving as straight couples," Doan said. "This should be an effective approach because it seems that people are swayed by the notion of love. If you can somehow convince people that gay couples are just as loving, then it seems more likely that the movement will gain more support."