My heartbreaking Wal-Mart story: How working there devastated my family

Cutting down on snacks and fun for the family, due to my low wages, was bad enough. But then came my son's prom 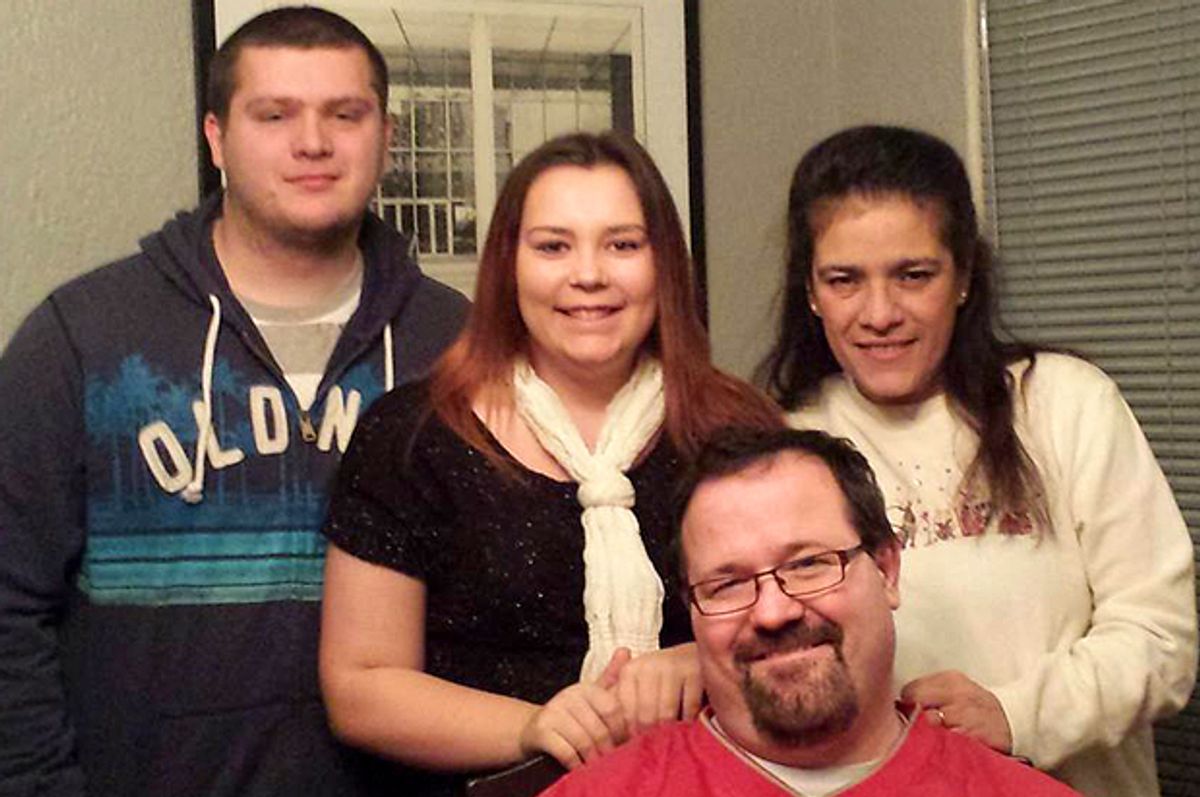 Linda Haluska (right) with her family
--

I was born and raised in a middle-class family in East Chicago, Illinois. My dad worked for over 25 years as a machinist at Inland Steel, caring for me, my sister and our mom with his single income. He was able to buy us a comfortable house and car and put food on the table. When we got treated to the movie or a restaurant, I felt special, but I also knew my dad didn’t feel stressed out by the expense – he wanted us to be happy and to believe in working hard and in enjoying the rewards. Above all, he felt hopeful that his children were on a path to greater security and success.

By the time I was ready to enter the workforce, I didn’t feel that same hope. In fact, it no longer seemed like you could take care of a family with one full-time job. I have my own children now, and I worry that they aren’t growing up with any belief in a better life.

For the past eight years, I’ve been stocking shelves at a Wal-Mart store in Glenwood, Illinois. I had thought that working for the largest employer, in one of the fastest growing industries in our country, would put me on a path for a steady paycheck and opportunities. But Wal-Mart jobs create financial insecurity, not a path toward the American Dream.

Still, I want my kids to enjoy their childhood now, and so my husband and I work multiple jobs to make ends meet and take them to an occasional movie or meal out – just like my dad did for me and my sister.  I am able to get extra work substitute teaching or picking up odd jobs like working at the fireworks stand.

Even with these side jobs and after working at Wal-Mart for eight years, I only bring home about $400 each week. That means that each month I have to make a decision about which expenses to prioritize and ultimately I have to call one of the bill collectors to see if I can pay late or adjust the payment.

I have spoken with management as part of OUR Walmart, an organization of Wal-Mart associates pushing for more respect, and I receive annual performance evaluations. But these have resulted in small raises – of no more than 50 cents an hour.

I dread opening bills when they arrive because anything higher than usual means another thing my children have to do without. This is especially hard in the summer and winter when higher electric bills mean that we have to cut expenses to the basic needs – no snack foods for the kids and definitely no fun activities with their friends or for our family.

This May, I had a conversation with my son Dennis I will never forget. He told me he had decided not to go to prom because he knew we could not afford it. I was heartbroken that he knew our finances were so stretched that there’s no way we could think about paying for a tuxedo, flowers and prom tickets. In the end, we had to pay the electric, water and car insurance bills – things we really can’t make do without -- and there was no extra money for prom.

With my job, I also miss out on important times for my kids. I’ve had to miss their basketball games and tell their teachers I can’t attend the parent-teacher meetings. I don’t want my kids growing up thinking this is as good as it gets and that even with a job you have to live paycheck to paycheck.

At the store and in TV ads, I’ve been hearing Wal-Mart talk about investment in manufacturing, which is laudable. But we cannot let the dollars and cents that they’re putting into this jobs campaign distract us, as a country, from the jobs at Wal-Mart stores and the need for the retailer to improve jobs for hundreds of thousands of workers. And they don’t need an advertising campaign and a big summit to make this change. They could raise pay and provide more hours tomorrow.

When I was growing up, my dad was so proud of his work. Manufacturing was seen as the way to a higher standard of living. But that reality is gone. Today, most of my neighbors, friends and family work in service and retail jobs, and sadly, the hard reality is that Wal-Mart’s treatment of workers continues to hold our country back. Being paid less than $25,000 a year – as most Wal-Mart associates are – while the company brings in $16 billion in profits and spends millions on ads is not OK.

The truth of the matter is that, like me, most Americans now work in retail and depend on these jobs to raise a family and enter the middle class. With its vast reach, Wal-Mart has the power to make a tremendous difference in the lives of hundreds of thousands of these workers and their families and transform the retail jobs that are here at home and here to stay into great American jobs. When Wal-Mart praises good manufacturing jobs in the U.S., I hope they also remember the millions who work in retail.

Linda Haluska is a mother of two and has worked at the Walmart store in Glenwood, Illinois, for eight years.