Rick Perry's indictment is bad for Democrats: A Texas perspective 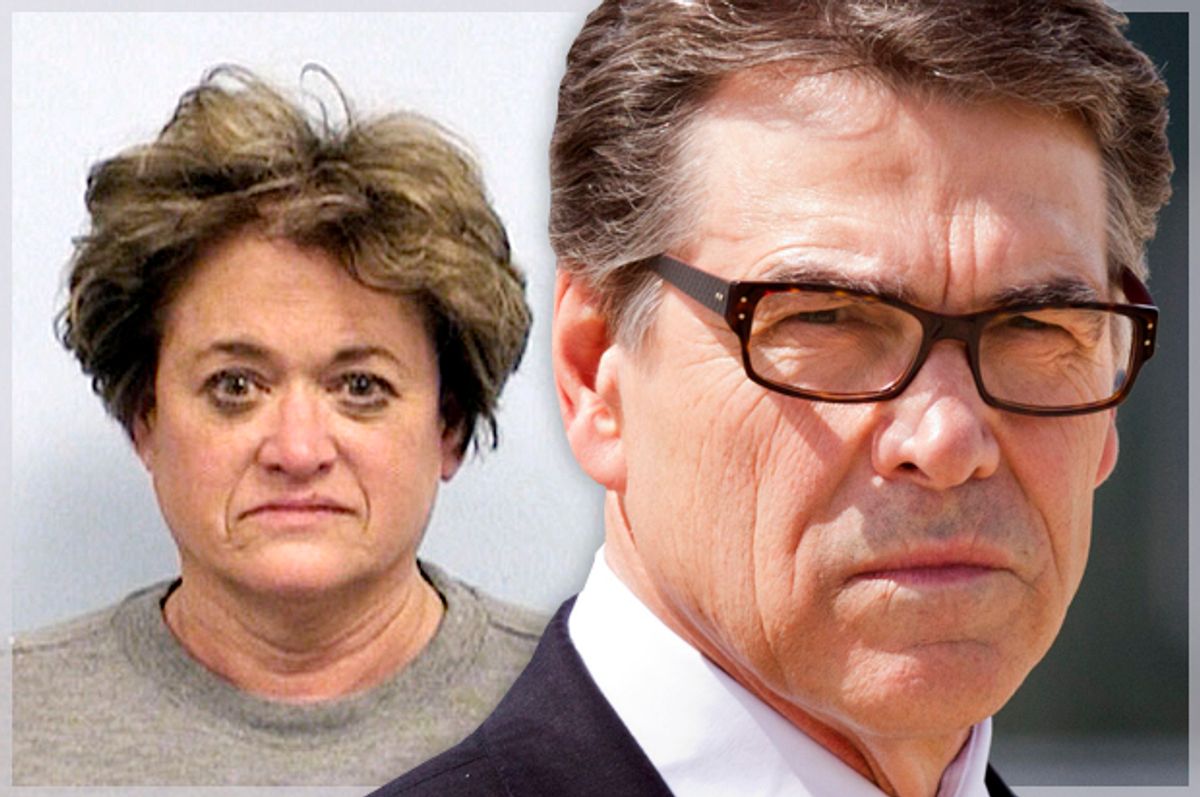 A Travis County grand jury has indicted the Texas governor and former and possible future candidate for the Republican presidential nomination for allegedly abusing his power, by threatening to cut off funding for the public integrity unit in the office of a Democratic County District Attorney, Rosemary Lehmberg, following her drunk driving arrest.

But this isn’t Watergate.  It isn’t even Bridgegate.  Allow me, a fourth-generation native of Austin and a veteran of the Texas statehouse, to explain.

The public integrity office is a unit in the Travis County district attorney’s office, funded partly by the state and partly by the county.  Its mission is to prosecute public corruption, insurance fraud and last but not least motor fuels tax fraud.

Travis County, in which the state capital Austin is located, has always been extremely liberal by Texas standards.  Ever since its citizens voted to oppose the secession of Texas from the Union in 1861, Travis County, thanks in part to the presence of the University of Texas in Austin, has been at odds with a state government that has usually been dominated by conservative Southerners from East Texas like Rick Perry.

Back in 2002, Lehmberg’s predecessor Ronnie Earle, who first created the public integrity unit, got a Travis County grand jury to indictTom DeLay for violating election laws.  DeLay was forced to resign as House Majority Leader and was convicted in 2011 and sentenced to three years in prison in 2011.  But in 2013 his conviction was overturned and DeLay was acquitted.

In light of that history, it will be easy for defenders of Perry to claim that his indictment, like the earlier indictment of Tom DeLay, is just the latest example of a campaign by Travis County Democrats to use the courts to bring down powerful Texas Republicans.

Rosemary Lehmberg does not make a very good martyr for Democrats to rally around.  A jailhouse video shows Lehmberg, following her arrest for driving while intoxicated, kicking the door of her cell and shouting at staffers.  Perry’s statement that he would not fund her office “when the person charged with ultimate responsibility of that unit has lost the public’s confidence” is going to be hard to portray as an act of Nixonian tyranny.  It is possible to imagine a Democratic governor of Texas taking the same action (though perhaps not the late Ann Richards—she and I got tipsy once after hitting the hootch when we were both early for an event).

Perry’s defenders are already claiming that the indictment is a witch-hunt.  Perry’s lawyer summed up the case for the defense:

The facts of this case conclude that the governor’s veto was lawful, appropriate and well within the authority of the office of the governor.  Today’s action, which violates the separation of powers outlined in the Texas Constitution, is nothing more than an effort to weaken the constitutional authority granted to the office of Texas governor, and sets a dangerous precedent by allowing a grand jury to punish the exercise of a lawful and constitutional authority afforded to the Texas governor.

In state politics, the indictment will undoubtedly help Perry with the Republican right, whose members have been upset at times with his deviation from Tea Party orthodoxy on matters involving immigration and infrastructure.  Conservative Texans who think that Barack Obama is a Kenyan Muslim socialist and that the secular humanists in the United Nations in alliance with the Federal Emergency Management Agency (FEMA) are plotting to impose a New World Order on small towns in Texas will not find it hard to believe that liberal Democrats in the Travis County DA’s office are using the court system for partisan purposes.

At the national level, Democrats are more likely to be hurt rather than helped by the Perry indictment.

Machiavellian Democrats should pray that in 2016 the Republicans will nominate Rick Perry for president and then lose the White House in a landslide.  The voters have not yet forgotten George W. Bush, and the nomination of another hawkish, socially-conservative Texas governor could produce a defeat on the scale of those of Goldwater in 1964 and McGovern in 1972.  Progressives should be disheartened by anything that hurts the chances of a Perry nomination.

Chris Christie is perhaps the biggest winner from the Perry indictment.  Bridgegate was an enormous blow to Christie, for two reasons.  First, it destroyed his carefully crafted image as a nonpartisan nice guy instead of a stereotypically sleazy New Jersey pol.  Second, forcing commuters to be stranded in traffic during rush hour to punish a political enemy is the kind of abuse of power that is easy to understand--unlike using a line item veto to cut one of a couple of sources of funding for the office of a county lawyer who pleaded guilty to drunk driving..

Now the indictment of Texas Governor Rick Perry allows Republicans to change the narrative, from “Who knew that Chris Christie was such a bully!” to “Look how liberal prosecutors are trying to bring down every Republican governor who is a potential president!”

It gets worse, from the perspective of Machiavellian Democrats (assuming such creatures exist). Stymied by Republican obstruction in Congress, President Obama is trying to use executive action to push through reforms in areas from immigration to the environment. For the most part, progressives have mounted a strong defense of broad executive prerogatives. It may be harder for progressives to argue that inherent executive authority is broad when exerted by a Democratic president to defer action against undocumented immigrants but narrow when used by a Republican governor in a line item veto to cut state funding for the Travis County DA’s office.

It is bad for democracy when parties that have lost elections try to overturn the results in the courts. That’s what the Republicans have done, by impeaching Bill Clinton, by installing the loser of the 2000 election as president with the help of Republican Supreme Court justices, and by suing and threatening to impeach Barack Obama. Are Democrats now going to try to use corruption charges, including far-fetched ones, to depose Republican governors they don’t like?

In politics, bad results can be overturned by ordinary people at the ballot box rather than appellate judges.  That’s why, whether you like or detest a particular politician, criminalizing politics is a bad idea.

For all of these reasons, Democrats nationwide have reason to be upset with Travis County DA Rosemary Lehmberg for inadvertently helping Rick Perry, Chris Christie, Scott Walker and the GOP brand in general.  As Talleyrand observed of Napoleon’s execution of the Duc d’Enghien:  “It is worse than a crime; it is a mistake.”