Facebook now wants you to know when fake news is fake 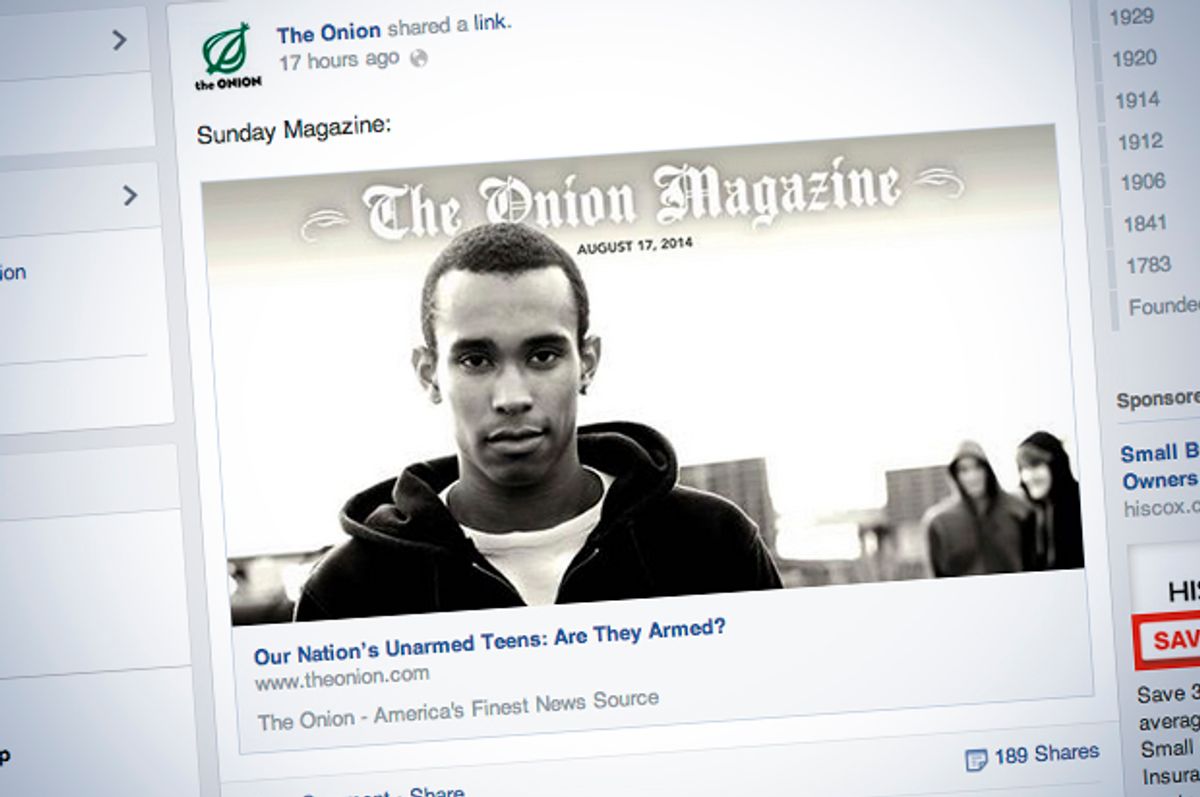 The best way to kill a joke is to explain it. But for those who, even in our fake news-rich culture have trouble distinguishing reality from parody, Facebook is reportedly toying with the idea of a "satire" warning on content that lampoons the news of the day. Either that, or Mashable, which first reported the news of the proposed satire label, is totally having us on.

As writer Chelsea Stark reveals, Facebook is currently testing a feature that would distinguish "fake news stories from sites such as The Onion" – at the request of users. A Facebook rep told her, "This is because we received feedback that people wanted a clearer way to distinguish satirical articles from others in these units." As opposed to, say, looking at the source or reading it critically. Ars Technica says that so far the satire tagging only appears in "related" articles, so original posts of satirical content still aren't carrying the warning. Facebook reps describe the current "small test," which has been running for over a month, as a means of distinguishing "the related articles unit in News Feed." Facebook declined, however, to identify what content it is tagging as satire – though apparently Clickhole is somehow currently exempt -- or whether it would be rolling out broader distinctions.

I admit that I have always had a strong aversion to any devices that blunt the impact of words alone. After 20 years online, I still cringe whenever a jokey message ends with a smiley. It's like a sad, needy "applause" sign at the end of a sentence. I think the two most passive-aggressive letters in the alphabet are "JK." I question the need for an entire vocabulary of gifs to communicate the sentiment that "I wasn't being serious about that." And while I understand that in a world of elaborate and often convincing ersatz news -- and real news that sounds unbelievable – it's hard to tell sometimes what's true and what isn't, a satire warning still has the same high ick factor.

Just last week, social media was abuzz with the tale of an NYPD cop who shot and killed a breast-feeding mother following a dispute over her "indecent" behavior. I even saw it on a journalist's Facebook page, despite the fact that it took all of two seconds to find it debunked on Snopes. The story was from the National Report, a fake news site that later explained, "Satire is not required to be humorous, nor was this particular post meant to be funny. Police brutality is a very real and very serious issue…. The people of the modern world need to understand and develop the ability to corroborate information and not just accept information as true without further inputs…. We thought we were making the story outlandish enough (seriously, killing a baby over a breastfeeding argument) to be questioned by reasonable readers." Last year, a Washington Post reporter took the bait from a satirical Daily Currant piece that cast Sarah Palin as the newest member of Al Jazeera, even though the story included the credibility-straining quote, ostensibly from Palin, that "I met with the folks at Al-Jazeera and they told me they reach millions of devoutly religious people who don’t watch CBS or CNN. That tells me they don’t have a liberal bias." And Fox News believed a National Report story about Obama opening a Muslim museum in the midst of the 2013 government shutdown.

Satire isn't always obvious or hilarious. It's not just Stephen Colbert as Stephen Colbert, faux conservative pundit -- although even Colbert gets taken very seriously at times. As Emmett Rensin noted earlier this summer in the New Republic, plenty of fake news sites, lacking the wit of an Onion, are simply "a potentially lucrative con predicated on exploiting the worst habits of social media driven news content." Sites like the Daily Currant run on far-fetched stories delivered with just a straight enough face that people will believe them and get whipped up over them. And Rensin said then, "Unless Google and Facebook change their algorithms — or humans suddenly become less gullible, and less prone to confirmation bias  — these sites will likely persist, metastasizing across the Internet like a profoundly unfunny cancer."

So now Facebook does indeed seem to be changing. And maybe that will spare a few people – and reporters – the embarrassment of falling for stories that are generated in some click-bait-hungry site's imagination. But if we don't want to be duped, we could also just try checking the facts. We could look at the source and question whether it's a legitimate one. We could examine its other content and decide if it seems unbelievable. It's the Internet; it's not like anybody has to go outside with a notebook and hunt down the truth. It's called Google, and it's pretty effective. We don't have to default to maximum gullibility. Sure, we all still get punked now and then, but we shouldn't have to be warned when we're in the presence of satire. The whole point of satire is to make us questioning and skeptical, to compel us to look at our world critically. That's why the purity of it matters. Because that's where its truth is.