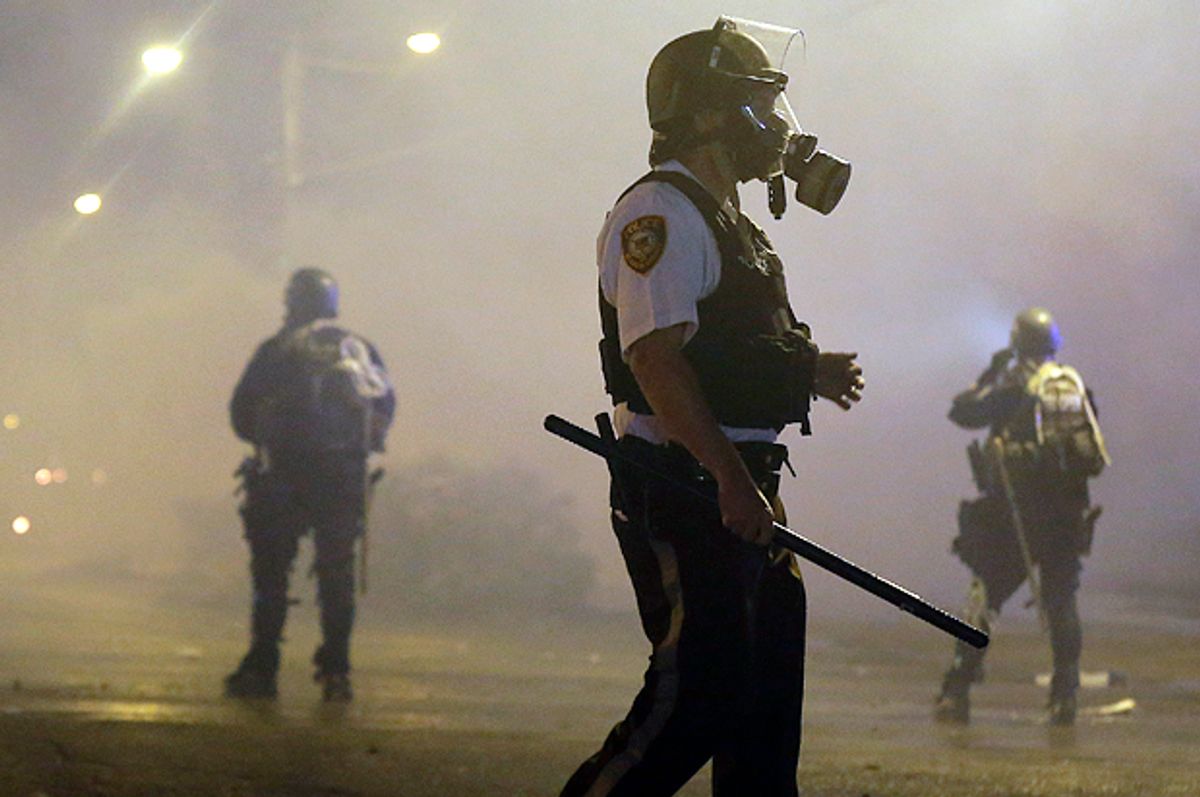 The Wall Street Journal editorial board wants us all to just calm down about the chaos in Ferguson, Missouri. Sure, they opine, there’s been a breakdown of civil order following the fatal police shooting of 18-year-old Michael Brown, but that doesn’t mean there are any broader themes to explore. “The first inclination of the political and media classes these days is to elevate every incident into a national trauma freighted with some larger theme akin to Selma, or Kent State, or Watts, or Waco,” they write. “But perhaps the public disorder among the protestors and police in Ferguson, Missouri is really about—well, the disorder in Ferguson, Missouri.”

That disorder and the absence of information, they argue, are being exploited by the “race lobby” – a term employed by only the most sophisticated observers of racial politics:

Police say Brown struggled for the officer's weapon, while a witness says he was shot while surrendering. Perhaps we received the wrong political training, but how is anyone supposed to draw a conclusion one way or the other without any knowledge of what happened that afternoon? Yet the race lobby is using Ferguson to portray an America that has made no racial or cultural progress since the 1960s.

There is little question that some young law-abiding black men are viewed suspiciously by some cops and the motivation may sometimes be race. It is also true that young black men—or rather, young men—commit crimes, often violent and whose victims are also mostly black. Instead of applying a predetermined racial template to every episode, both problems should be treated with the seriousness they deserve, which means judging each case on the merits.

There’s just so much to unpack in these two brief paragraphs. The idea that progress made on racial equality since the days of segregation and Jim Crow somehow undermines the complaints of civil rights activists is actually a common trope for the Journal’s editors. “For Eric Holder, American racial history is frozen in the 1960s,” they wrote of the attorney general when he objected to the Supreme Court’s dismantling of the 1965 Voting Rights Act. It’s a neat trick that makes the continued effects of centuries of institutionalized brutality and racism seem less pernicious, while simultaneously making civil rights leaders struggling against that racism seem unreasonable for being no less strident.

“There is little question that some young law-abiding black men are viewed suspiciously by some cops and the motivation may sometimes be race.” That sentence is a masterpiece of careful, precisely hedged language that pretends to address the issue at hand while actually tiptoeing around it. “It is also true that young black men—or rather, young men—commit crimes, often violent and whose victims are also mostly black,” they continue, making a fully confident assertion about an issue that isn’t related to the chaos in Ferguson. The combined effect of the two sentences is to give the cops the benefit of the doubt in every instance – only some cops are maybe sometimes racist (maybe!), but lots of black men commit violent crimes. This puts the Journal in the same company with other conservatives who are making excuses for a police department that’s behaved abominably over the past week.

And if there’s a “predetermined racial template” in place with respect to Ferguson and its police department, it was put in place by the cops, not the “race lobby.” The Washington Post’s Philip Bump compiled all the reporting that best explains how the tumult in Ferguson came about, and a good deal of it focuses on the tension that arises over the perception that the overwhelmingly white police force has been targeting black residents. The rate at which black motorists are pulled over by the police in Ferguson is higher than their share of the population. And the rate at which black motorists are searched after being pulled over is higher than that for whites, even though black motorists are less likely to be carrying anything illegal. This has been going on for years, and it’s fed into a deep reservoir of mistrust and animosity.

But that’s just a Ferguson problem, right? Surely it doesn’t reflect any broader trends in the relationship between police forces and the African-American residents they’re charged with protecting and serving. Well … it turns out that unarmed black men are shot at by police at a disproportionately high rate all across the country.

That’s the sort of information you disregard when you want to chalk up outrage over long-standing issues of racist discrimination to self-serving agitation by the media and “the race lobby.”

It’s also the sort of information you disregard when your default position is to defend the police against allegations of racial bias. “One irony of Ferguson is that liberals have discovered an exercise of government power that they don't support,” the Journal’s editors wrote with regard to the Ferguson police department’s militarized crackdown on protesters. The “irony” of that statement seems to be undermined by the fact that the Journal often vociferously defends heavy-handed police tactics against “liberal” complaints. The Journal strongly backs, for example, the New York City Police Department’s blatantly discriminatory stop-and-frisk program. Its July 25, 2013, editorial supporting the policy bore the subhed: “Racist police and other New York City myths.”

The absurd tactics employed by the Ferguson police left the Journal less ardent in their support – “The sniper rifles, black armored convoys and waves of tear gas deployed across Ferguson neighborhoods are jarring in a free society” – but their allegiance still clearly lies with the people firing the guns and the gas at unarmed people.