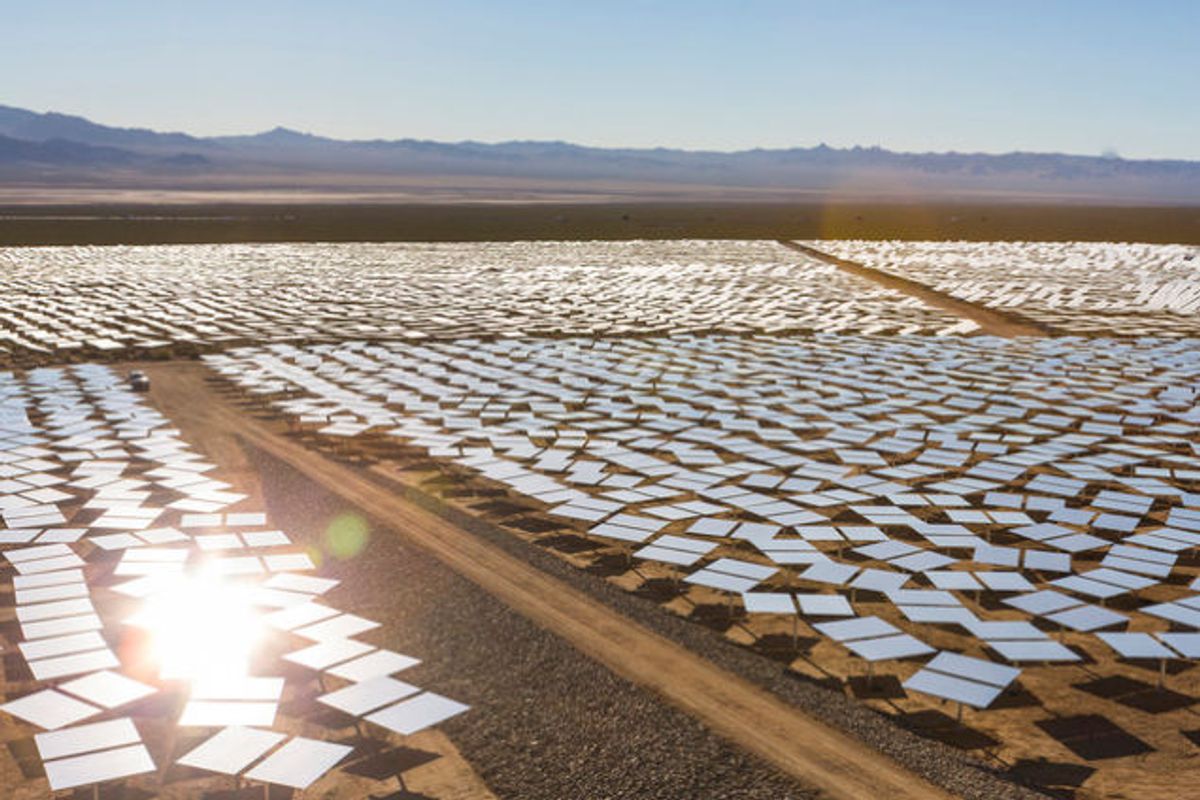 Like windmills, whose brazenly rotating blades have been known to slice and dice our avian friends, solar panels come with a macabre side effect: gather enough of them together in a certain configuration, and the concentrated solar rays are powerful enough to set birds on fire mid-flight.

The Associated Press reports on an ongoing controversy at the $2.2 billion plant in Southern California, where federal wildlife investigators, citing bird deaths of anywhere between a thousand and 28,000 each year, are challenging the operators' plans to build an even bigger solar farm. Here, via the AP, is how the so-called power-tower works as a "mega-trap" for unwitting birds:

More than 300,000 mirrors, each the size of a garage door, reflect solar rays onto three boiler towers each looming up to 40 stories high. The water inside is heated to produce steam, which turns turbines that generate enough electricity for 140,000 homes.

Sun rays sent up by the field of mirrors are bright enough to dazzle pilots flying in and out of Las Vegas and Los Angeles.

Federal wildlife officials said Ivanpah might act as a "mega-trap" for wildlife, with the bright light of the plant attracting insects, which in turn attract insect-eating birds that fly to their death in the intensely focused light rays.

The new power-tower, officials claim, could prove four times as lethal. Officials at BrightSource Energy say they're trying to figure out ways to scare the birds away, and are offering $1.8 million in compensation for the anticipated kills, which so far hasn't been enough to appease opponents.

We could argue that birds are just never going to win this one, whether they're getting mangled in the air by renewable energy sources or coated in oil (the more "traditional" way). Actually, as the Atlantic recently pointed out, as many as 988 million birds are killed every year from crashing into windows, a threat dwarfed only by that posed by domestic cats. You'd almost think we humans had it in for them, or something.

And then, of course, there's climate change itself, which is messing with birds' migratory patterns and habitats, contributing to population declines. If we do know one thing for sure, it's that we're going to keep needing energy -- and we need more of that energy to be renewable. But while having downsides certainly isn't unique to renewable energy, it doesn't mean there isn't room for improvement. One newly proposed 485-megawatt solar plant in California's Riverside County is being praised by environmental groups for steps it plans to take to minimize its environmental footprint, such as building on former farmland instead of an untouched landscape. And as the New York Times reported back in February, the falling prices of competing technology, like conventional, non-bird-killing rooftop solar panels, could already be making projects like the one at Ivanpah obsolete.