"We thought we'd be safe": Islan Nettles, the New Jersey 4 and the illusion of security for LGBTQ people of color 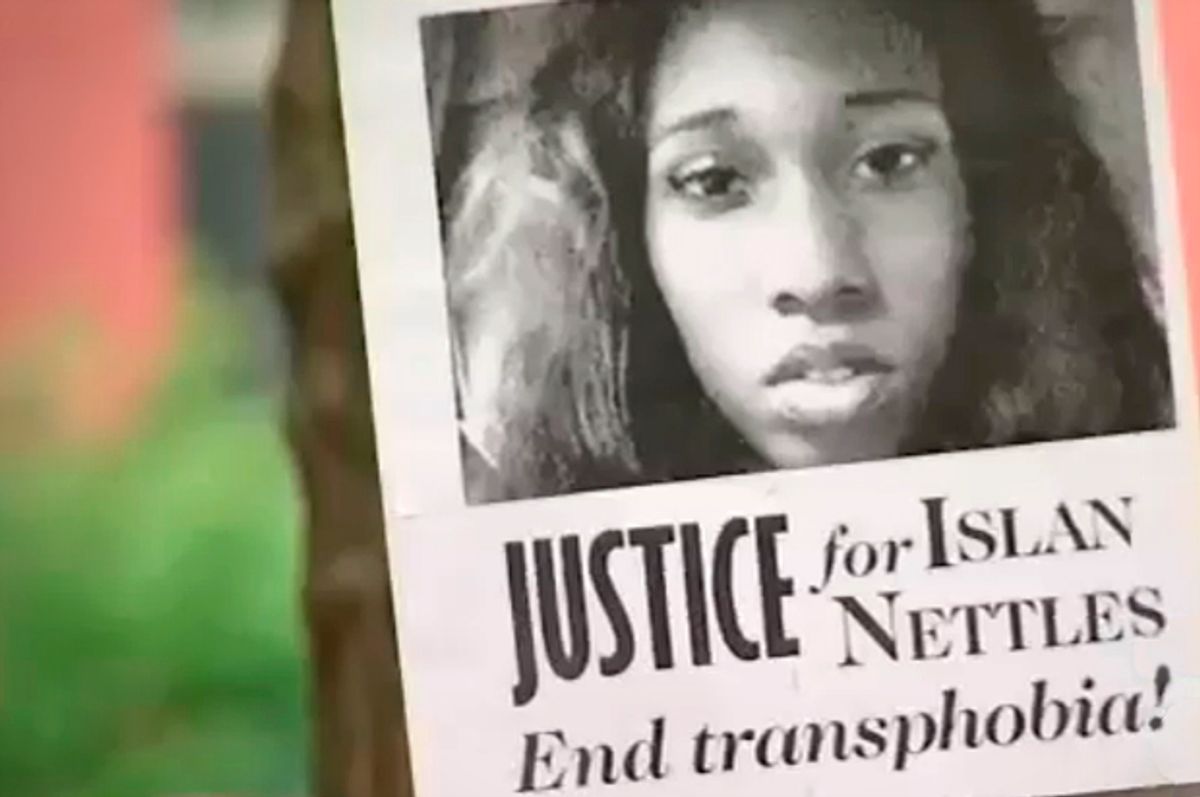 "I wanted to go to the Village 'cuz it's nothing but gay people," said Renata Hill in the new documentary "Out in the Night." "We thought we wouldn't have a problem if we went to New York. We could just be ourselves," she recalled.

"That's not true," interjected her friend Terrain Dandridge. "That's where it happened to us."

"Well," Renata said, amending her comment, "that's where we thought we'd be safe."

The West Village has historically been known as a safe haven for LGBTQ people. People travel from various parts of New York and New Jersey to be in the neighborhood, walk around without feeling judged or to worry that their sexual orientation or gender identity will lead to an attack. But, eight years ago, seven young women learned that safety, even in a haven like the West Village, is never guaranteed.

On August 18, 2006, Renata Hill, Terrain Dandridge and five of their friends decided to go to the Village. All were young, black and lesbian. Outside the Independent Film Center (IFC), a small theater showing independent films, they were harassed by a man named Duane Buckle. When they told him they were gay, he threatened them with rape and physically attacked them. He threw his lit cigarette at them, ripped the hair from one woman's head and choked another woman.

The seven women defended themselves and, at some point during the four-minute fight, were assisted by two unknown men. As Buckle attempted to choke Renata, her friend Patreese Johnson stabbed him with a pen knife. By the time the police arrived, the men who had jumped to the women's defense had left the scene. Buckle was taken to the hospital, where he stated that men had attacked him, and released a few days later. The women were arrested, taken to the precinct and charged with gang assault, assault and attempted murder.

None of the women had prior records or histories of police involvement. Nevertheless, they were held without bail at Rikers Island while awaiting trial. Facing the possibility of twenty-five year sentences, three women accepted plea bargains and served six months. The remaining four -- Venice Brown, Terrain Dandridge, Renata Hill and Patreese Johnson -- pled not guilty and became known as the New Jersey Four. They were convicted and received sentences ranging from three-and-a-half to eleven years in prison.

None had ever been involved in a gang, yet they charged with and convicted of gang assault. Their claims of self-defense were ignored.

Out in the Night, a film by blair dorosh-walther released by the Fire This Time The Film LLC, examines how race, sexual orientation and gender violence affect ideas about safety and self-defense, and how each shaped the fates of the New Jersey Four. What happens when women refuse to accept street harassment or homophobic violence? What happens when these women happen to be black women?

The documentary places the case of the New Jersey Four in a larger pattern of violence against black people and the legal system's treatment of their claims to self-defense. It draws parallels between the case of the New Jersey Four with more recent cases involving attacks on black people, such as Trayvon Martin, CeCe McDonald and Marissa Alexander. All three were attacked, all three fought back, and all three were treated as if they were the aggressors by the police and court systems. Although Trayvon Martin was the person killed, the media and legal system treated him as if he'd been the assailant, subjecting his body to drug testing and speculating about his recent school suspension and cellphone photos as if these justified his killing. McDonald and Alexander's claims of self-defense were likewise rejected by the courts, and they were both demonized in the media.

Similarly, when the seven women were initially arrested in 2006, news headlines labeled them a "lesbian wolf pack" and "killer lesbians." Meanwhile, The New York Times stated that "Man is Stabbed in Attack After Admiring a Stranger." Evening news segments added more fuel with reports of lesbian gangs (alternately labeled Gays Taking Over and Dykes Taking Over) raping young girls.

Attorneys of the New Jersey Four note that the fear-mongering around the case had even reached the courtroom. "The district attorney made certain decisions, like the charges and holding them without bail," noted Susan Tipograph, one of the two trial attorneys for Hill. Those charges influence perceptions even before evidence can be presented, agreed Lori Cohen, Tipograph's co-counsel. "There are some charges that, when you hear them, it's really hard to get below them to what actually happened." The charges scared at least one juror who, Tipograph remembered, sent his wife out of town during the course of the trial.

"Out in the Night" also challenges viewers to think about the constant threats (and realities of) harassment and violence against LGBTQ people, particularly LGBTQ people of color. The film recounts the 2003 murder of Sakia Gunn, a fifteen-year-old high school student and black lesbian. Gunn and her friends had been returning from New York City's West Village. As they waited for the bus in downtown Newark, they were propositioned by two black men. When the women told them that they were lesbians, the men attacked. One of the men stabbed Gunn in the chest. Her friends flagged down a taxi and took her to the hospital, where she died. The night they were attacked three years later, Patreese recalled, she remembered Gunn and wondered if the same thing would happen to her.

Gunn's death is neither an anomaly nor is it a relic of the (not-too-distant) past. In 2011, CeCe McDonald, a twenty-three-year-old black woman, faced the same scenario. Walking down a Minneapolis street with her friends, McDonald was first verbally harassed and then physically attacked by people standing outside a bar. One woman smashed glass into McDonald's face, slicing into her cheek. The man who had instigated the harassment was stabbed during the attack. He was taken to the hospital, where he later died. McDonald was arrested and charged with second-degree murder. The woman who smashed glass into her face was neither arrested nor charged.

During pre-trial motions, the judge ruled against McDonald's ability to introduce evidence showing that the attack against her was motivated by her race and gender identity: Both Schmitz's swastika and his three previous convictions for violent assault were ruled inadmissible. The judge also refused to allow an expert witness to testify about the pervasive and systemic violence faced by trans people on a daily basis. Facing the possibility of twenty to forty years in prison and a hostile court, McDonald pled guilty to second-degree manslaughter due to negligence and was sentenced to forty-one months in prison. She was released this past January.

In August 2013 twenty-one-year-old Islan Nettles died after being attacked on a New York City street. While accounts vary as to whether she was flirting with or had been catcalled by 20-year-old Paris Wilson, all agree that, after realizing that she was trans, Wilson beat her unconscious. She died four days later at the hospital. Wilson was originally charged with three counts of misdemeanor assault and released on $2000 bail. A few months later, when another man claimed that he had attacked Nettles but was too drunk to remember what had happened, the district attorney dropped the charge altogether, declining to prosecute either.

Why did the legal system treat the death of a young trans woman less seriously than a non-fatal stabbing with a pen knife? What does this say about the value placed on the lives of black people, particularly LGBTQ black people? The attacks on Gunn, McDonald, Nettles and the New Jersey Four are only a few examples of the systemic violence faced by LGBTQ people, particularly LGBTQ people of color. A recent report by the National Coalition of Anti-Violence Programs found 2,001 reported incidents of anti-LGBTQ violence. Of the violence that ended in homicides, ninety percent of the victims were people of color; seventy-eight percent were Black and African-American. Undocumented people, trans people and people of color were among those at risk for the most severe forms of anti-gay and anti-trans violence.

Patreese Johnson, who is four foot eleven inches, recounted that her brother Anthony had originally urged her to carry a pen knife for protection. Doing so had provided her with a sense of safety and security. But, after that August night and nearly eight years behind bars, she realizes that that sense of safety was an illusion. "I don't feel safe in here," she said during an interview from prison. One month before her release, she was reminded that safety outside prison walls is just as elusive -- Anthony was shot and killed outside his own home. After her release in 2013, Patreese no longer carries a knife. She's still looking to find safety in some other way.

Victoria Law is a freelance writer and editor. She frequently writes about gender, incarceration and resistance. She is the author of "Resistance Behind Bars: The Struggles of Incarcerated Women" and the co-editor of "Don't Leave Your Friends Behind: Concrete Ways to Support Families in Social Justice Movements and Communities."