Why did Ireland deny a suicidal woman an abortion? 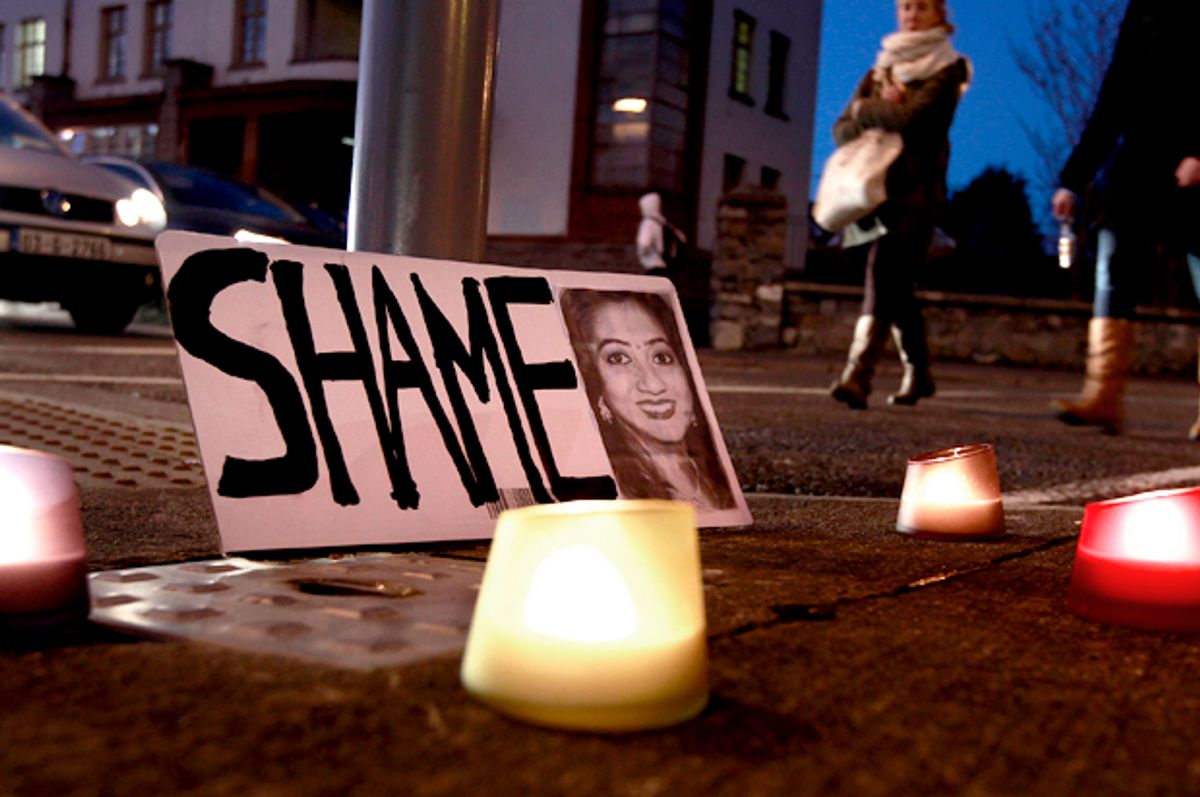 In yet another harrowing example of Ireland's appalling and systematic abuse of female bodily autonomy, a young woman who claimed to be suicidal after getting pregnant via an alleged rape was recently denied an abortion. And then it got really bad.

In the nearly two years since Savita Halappanavar died of septicaemia in Galway after being denied a lifesaving termination while she was miscarrying, international outcry has put pressure on the Irish government to revise its outdated and often dangerous policies toward abortion. In 2013, the country legalized abortion in limited circumstances, including "when a mother's life is at risk due to medical complications or the threat of suicide." Yet in July, the U.N. Human Rights Committee in Geneva declared that the country's legislation was still in breach of international human rights and said that putting suicidal pregnant women through medical review was "additional mental torture."

Now, even more damningly, comes the case of a young woman who seemed to meet precisely the criteria for obtaining an abortion and was coerced into an early c-section instead. A friend of the woman, who is an immigrant and has not been named, tells the Irish Times that she was raped in her home country and learned that she was pregnant after coming to Ireland earlier this year. Her friend says that she claimed, "I do not want this. I am too young to be a mother. I am not ready." She also reportedly feared for her safety. He says that "the woman had been seeking information about abortion from authorities for up to three months" but that she was not given information on how to obtain one. She went to a general practitioner last month who directed her to a hospital, where she was told she was too far along and refused. The Irish Times reports that a "medical source familiar with the case" confirms the timeline.

When she was turned down for an abortion, the woman threatened to go on a hunger strike, and a panel of psychiatrists agreed she was suicidal – but an obstetrician "said the baby could be delivered." The Guardian reports that then "local health authorities obtained a court order to deliver the baby prematurely – at about 25 weeks, according to some reports – to ensure its safety. The infant has been placed in care." And we all know Ireland's track record on institutionalized care. The New York Times says the woman consented to the caesarean after proceedings were set in motion to forcibly hydrate her.

Ireland's current guidelines for getting an abortion on the grounds of threat of suicide must be approved by a panel of up to seven medical experts. Doctors for Choice this week said in a statement that "If a young rape victim, certified as requiring an abortion due to the risk of suicide, cannot access abortion services, then the legislation and its implementation are clearly fatally flawed. Repealing the eighth amendment in an urgent referendum and decriminalizing abortion have now achieved emergency status." And Máiréad Enright of Lawyers for Choice notes, "This judgment puts a whole lot of vulnerable women in Ireland, like the thousands of migrants and women from traditionally underprivileged communities like the Travelers, at even greater risk." The National Women's Council of Ireland, meanwhile, simply calls the case "barbaric."

In far too many places of the world, it is not easy to convince people that women should have the right to make decisions about their health and well-being. It is not easy to explain that forcing a woman who is by many accounts a young, suicidal rape victim frightened of retribution to have a cesarean is an act of cruel violation. So let's all remember again that this is what the so-called culture of life is capable of. It sees the torment of sexual assault as inconsequential, and pregnancy that results from it as a "gift from God." It would literally rather ignore its own marginal procedures for helping women who are desperate and surgically remove babies from their bodies than grant them abortions. And "barbaric" is exactly the right word.